He shares the heartwarming tale of how the Grinch (a.k.a. Bill Belichick) gets the Pats in shape for the Super Bowl. 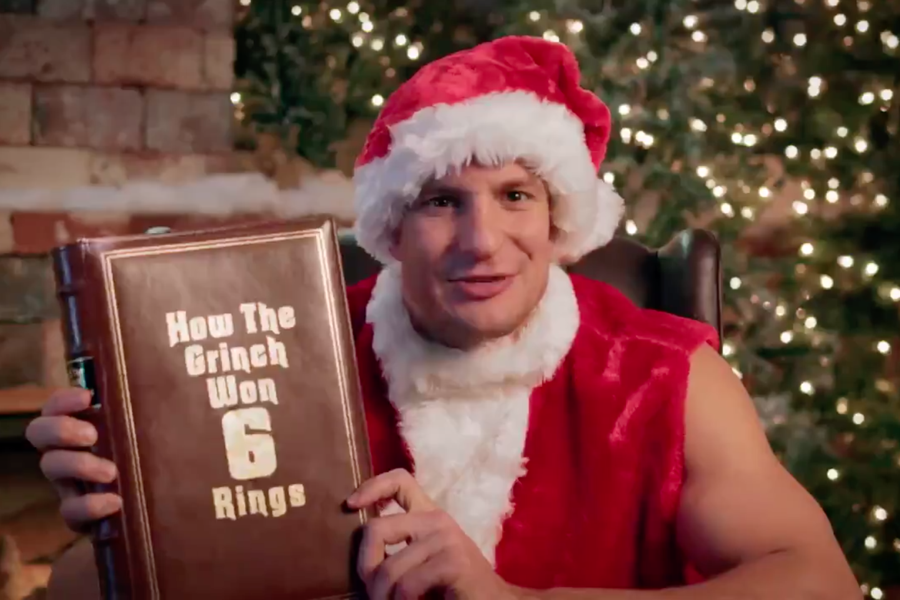 Everybody’s got their favorite Christmas characters, the kind that really deliver on the warmth and holiday cheer we’re all after this time of year. Maybe it’s Clark Griswald or Buddy the Elf, George Bailey or Rudolph, or all the Tom Hankses in Polar Express.

But this year, readers, the embodiment of the spirit of the season to me is none other than Santa Gronk, a new and lovable entry in the Christmas canon we all met last night.

In a new video shared on the retired tight end’s Twitter feed Sunday, Rob Gronkowski regales us with the tale of how Patriots coach Bill Belichick each season swoops in to rob his players of their favorite pastime—partying—not unlike another famous Christmas villain.

Seated in front of a twinkling Christmas tree and sporting a sleeveless Santa suit, Gronk reads from a book called “How The Grinch Won 6 Rings,” and explains how the very un-Gronk-like ban on drinking helped lead the team to victory. “Every bro in Foxboro loves partying a lot,” he narrates, reading from the leather-bound volume as a cartoon depiction of Belichick and Pats stars begins to play. “But the coach who coached up in Foxboro did not.”

The inspiration for the tale comes from Gronk’s commentary on Fox Sports back in October, when he compared his famously strict coach to the Dr. Seuss character.

.@PSchrags: Last week you compared Julian Edelman to a squirrel… What are you comparing Belichick to?@RobGronkowski: The Grinch, always trying to take away the fun 🤣🤣 pic.twitter.com/7M62JivI3I

Except in this case the Grinch isn’t stealing presents from under Whoville trees, but nabbing glasses of wine from dinner tables, putting the kibosh on late-night clubbing and game-time hangovers, and forcing players to “start Tom’s TB12 diet.”

While the players in this tale are not thrilled with these rules from the miserly head coach, who is depicted as a sneering green elf with an evil laugh, eventually he is redeemed when the team brings home another one of those precious rings. And as a result, says Santa Gronk, “The Grinch was so happy his hoodie, I mean heart, doubled in size.”

The tale resolves in a happy ending for all, when Santa Gronk says that post-Super Bowl he “taught the Grinch how to rage,” with the cartoon version of the famously stoic Belichick pictured guzzling beers from a funnel.

It’s unlikely the real-life Belichick is doing much raging after the postseason, but hey, what’s a Christmas classic without a healthy dose of fantasy?