Papered-over storefronts and “for rent” signs have marred the appearance of Harvard Square and are threatening the beating heart of Cambridge. Thankfully, there’s a solution. 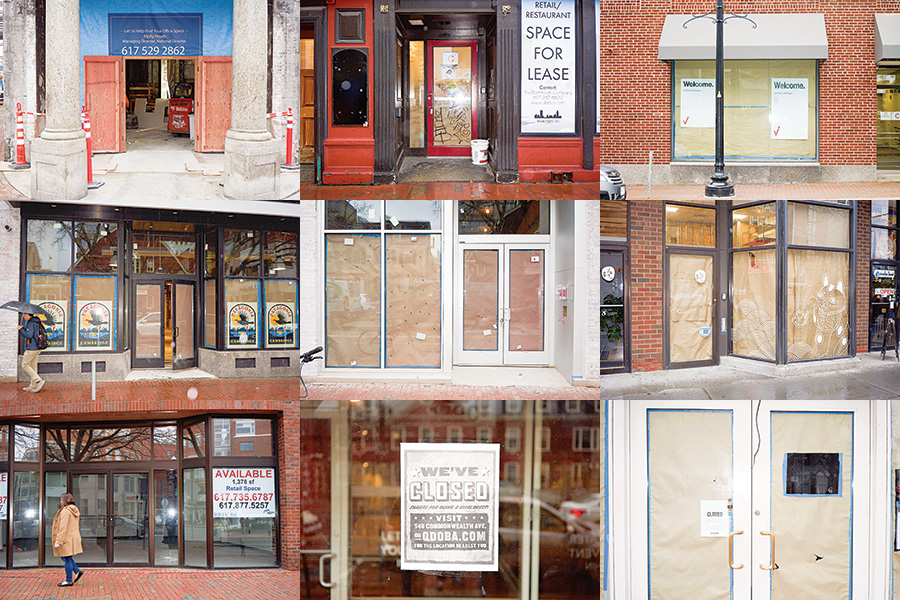 Strolling through Harvard Square recently looking for a bite to eat, I had a hard time recognizing the iconic neighborhood. The windows on JFK that used to look into Uno Pizzeria are papered over; the doors to the old Fire + Ice, on Church Street, are shuttered; and the storefront of what was once Hidden Sweets stands dark. Empty since 2016, these spaces are only a few of the 20-plus vacant storefronts in the Square, making the area look more like a forgotten urban wasteland or a hollowed-out mill town than a vibrant college neighborhood.

But what’s plaguing the Square is neither neglect nor economic hardship: The runaway success of its real estate market has brought on an acute case of “high-rent blight,” with deep-pocketed landlords swallowing months or even years of rent, hoping to land a lucrative lease from an international chain or a bank.

Many of the recent closures, especially along iconic Brattle Street, have their roots in the 2015 and 2017 sales of $193 million worth of property to two out-of-state investors, Regency Centers and Asana Partners. Susan Corcoran, the owner of the nearly two-decade-old gift store Black Ink, said she was willing to negotiate a new lease with Asana, but the numbers presented to her “were so out of the realm of possibility for me that I didn’t even come back with a counteroffer.” Now her store has gone dark, too.

The empty storefronts are more than just depressing eyesores; they also threaten the economic viability of the businesses that remain. Former Cambridge City Councilor Jan Devereux says vacancies unleash a vicious cycle: The more empty buildings there are, the less foot traffic there is in the Square, and that means less revenue for the survivors. Vacant spaces can even scare away prospective retail tenants. “When stores sit empty for many months, or even years, it erodes the quality of the streetscape and feeds a perception that a commercial district is struggling,” Devereux says. In other words, if Harvard Square, which was once the beating heart of Cambridge, ceases to be a shopping and dining destination, it could have serious consequences for the local economy and decrease the quality of life for the people who call it home.

The simplest remedy for this greed-driven urban ill? A vacancy tax that would penalize landlords for not promptly filling their storefronts. This type of fee could rejigger the economics of vacancies, upping pressure on landlords to keep rents competitive and work with current tenants so they can stay in business.

Vacancy taxes can be annual fees that increase each year, with stiff penalties for owners who fail to register their properties as vacant. This is how it’s done in local places such as Arlington, Lowell, and New Bedford, while Washington, DC, ties the fee to the property’s value. None of these ideas is necessarily a silver bullet, but any of them would certainly help. According to Devereux, a vacancy tax could, at the very least, “light a fire under the [landlords] to get a short-term, five-year tenant and see how it goes.” Devereux led a debate on the tax last summer, but the council has yet to act.

Meanwhile, Asana told me it is filling the former Black Ink space with a renter that will open its doors in mid-2020—and that the firm’s other retail spaces on Brattle will be open for business by the end of the year. Even if that is true, it still means at least another year of depressing shuttered storefronts, reduced foot traffic, and lost revenue for the remaining businesses before we see a bustling Harvard Square again. Maybe landlords would find that wait time as unacceptable as everyone else does if they were forced to pay for it.