Six Things Everyone Gets Wrong about the Boston Massacre

It wasn't even a massacre, and other misconceptions about the 250-year-old killings. 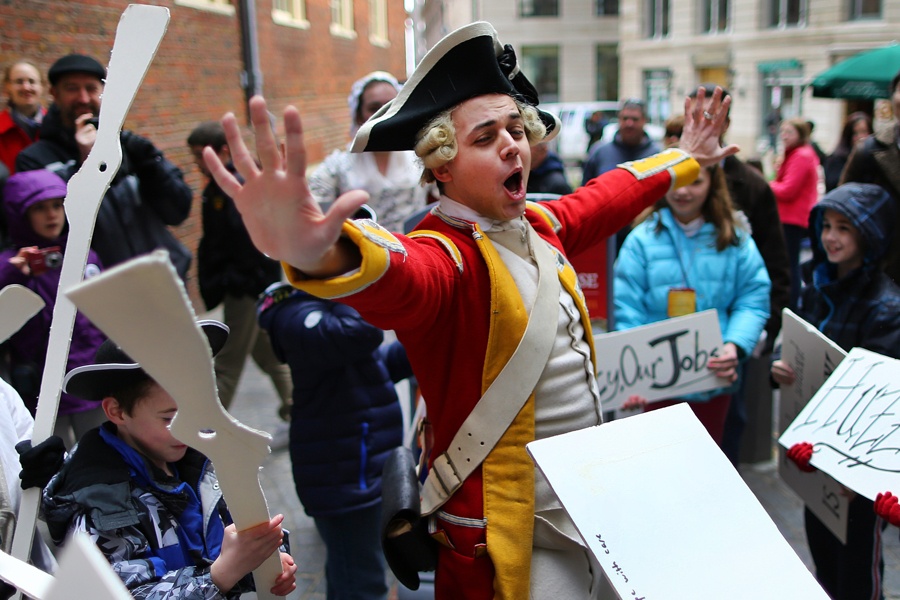 British corporal Daud Alyzer tries to put and end to the clash between his soldiers and the Bostonians played by children at the Old State House. Photo via Getty Images/John Tlumacki/Boston Globe

Everyone who took American history in school knows the basic story of the Boston Massacre, right? On March 5, 1770, a band of patriots stood their ground against the British troops occupying their land when a row of troops mercilessly fired into a crowd of innocent civilians at their commanding officers’ order. American patriots rallied in the aftermath of the violence and the massacre became shorthand for the brutal injustice of British rule. Eventually, it was used to stoke support for full-on revolution. On the 250th anniversary of the massacre, this is the story that persists. But many of the facts that we think are true are really only part of the story, or just flat out wrong. How wrong? You’d be surprised.

It was, of course, a tragic series of events. Still, a handful of deaths is hardly a “massacre,” especially when stacked up against other historical events given that title, such as the Wounded Knee Massacre, which killed as many as 300. “If you ask, ‘How many people do you think died in the Boston Massacre?’” says historian Serena Zabin, author of a new book out this year called The Boston Massacre: A Family History. “Many people will answer, ‘Hundreds? Maybe a thousand?’ It’s like, no. It was five. People are shocked! How does that get to be a massacre? Well, Paul Revere said it was, and we’re still there.”

2. It may not have happened exactly where you think it did.

The marker in front of the Old State House, which proclaims itself the exact spot of the Boston Massacre, has been moved several times over the years, from the middle of the street, to a cramped median once dubbed by tour guides “the island of death,” to its current spot, where it was moved in 2011 during a renovation of the State Street MBTA stop. Sorry!

3. The Redcoats weren’t exactly mortal enemies at the time

Far from it, in fact. While thousands of British troops were stationed in the city, they formed close bonds with the colonists. Records show the soldiers and civilians partied and drank together, married one another, had kids together, named one another as godparents, and in at least one case banded together to commit robberies. Most of the population of Boston at the time was women, so the arrival of British soldiers was actually seen as a welcome chance to find suitors and start families. “There’s a much closer connection between the soldiers and the Boston civilians than we ever imagined,” says Zabin. “The Boston Massacre was really not the beginning of the American Revolution but the breakdown of a family. It was more like a bad divorce.”

As the most famous victim of the shootings, Attucks has been remembered for centuries as an African-American hero who was the first to die for the cause of American independence. Fewer remember he also had Native American heritage, and so would have been justified in feeling animosity toward both the British and the colonists—and would likely have had goals other than simply American independence in mind when he protested against the Redcoats. “Looking at Attucks gives us a view of the complex nature of the Native American experience in Massachusetts during the middle of the 18th century,” says Nat Sheidley, president and CEO of the Boston history group Revolutionary Spaces, which runs Boston Massacre programming at the Old State House and Old South Meeting House and which will be debuting a new Crispus Attucks exhibit at the Old State house this week. “He reminds us that the struggle of native peoples for their own sovereignty was going on alongside the English colonists for their rights.” 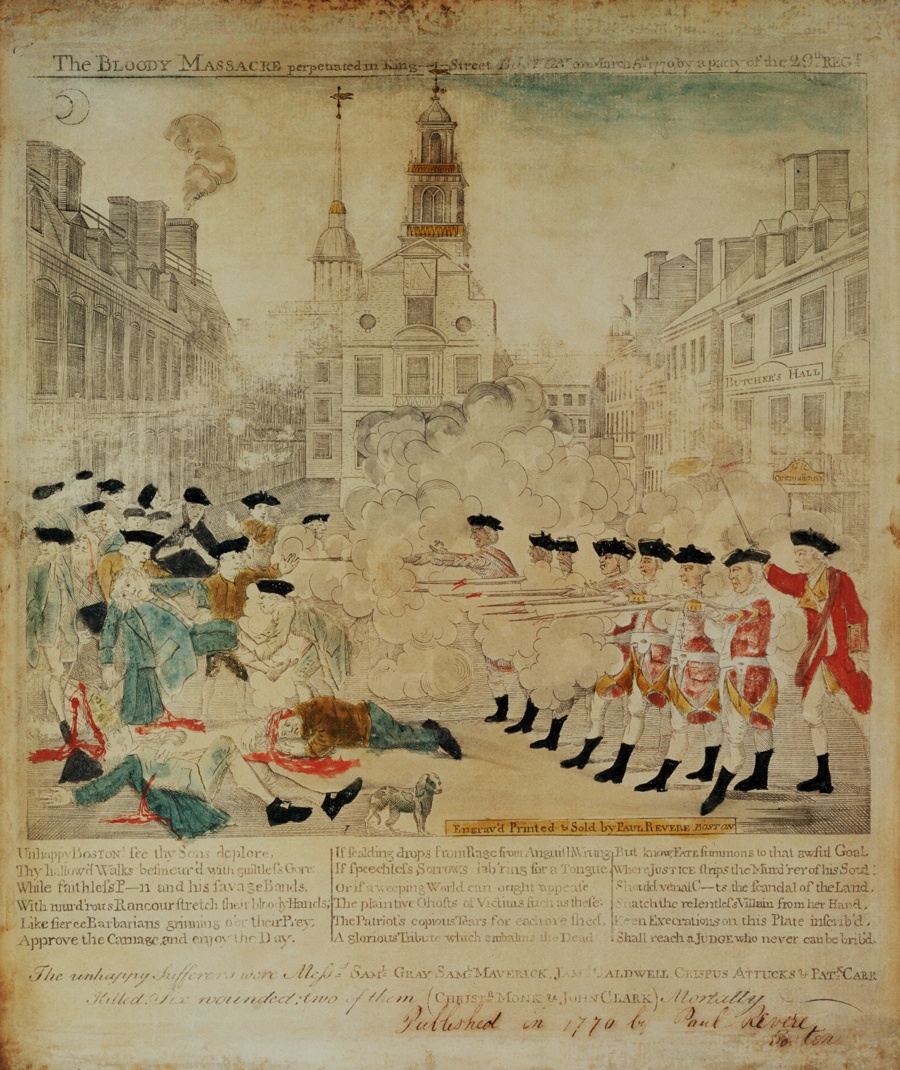 His famous depiction of the incident is considered one of the most impactful pieces of propaganda in American history—so it’s no surprise to learn that it’s riddled with inaccuracies. For one thing, the Custom House has been renamed “Butcher’s Hall” in the drawing for dramatic effect. For another, the wounded patriots are pictured dressed in fine clothes when they were in fact laborers who would have looked much less put-together. Plus, the idea that the Redcoats were acting on direct orders to fire, like they are in the drawing, is contradicted by eyewitness testimony. But Revere wanted to tell a story that would get colonialists riled up about the imperial Brits, and we all know how that turned out a few years later.

To this day, tourists flock to Boston harboring myths about the massacre thanks in large part to Revere’s engraving. “They have seen that image whether in textbooks when they were kids or in all of the historical gift shops around Boston… and that engraving is totally inaccurate” says Emma Wiegand, a Freedom Trail tour guide. Still, she says, “The image is so valuable in terms of discussing the power of propaganda and how certain versions of stories that may not be totally true can be incredibly useful when rallying people to a cause.”

6. John Adams’ famous defense of the soldiers was pretty racist.

You may have heard that future president John Adams represented the soldiers involved in the Boston Massacre at trial, and that they were ultimately acquitted of murder for their role in the slayings. What you may not know, though, is that Adams didn’t mind telling some pretty wild tales about the victims of the shooting in court in order to win the case. “He drew a distinction between the ‘good people of Boston’ and the ‘motley rabble,'” says Sheidley. “He basically ticked down a list—[‘saucy boys, Negroes and mulattoes, Irish teagues and outlandish jacktars’]—and said those are the people who were rioting.”

Given what really happened on that fateful day in 1770, why has the story persisted the way we remember it? Well, every new nation needs a creation myth—and the founding fathers were very good at spinning a compelling tale that people could rally around. But now, as we recognize the 250th anniversary, it’s important to to remember the real stories, too.