In Boston and other cities slowly beginning to reopen, barbershops and hair salons are among the first services to resume. That doesn't mean whether to get in the chair is an easy call. 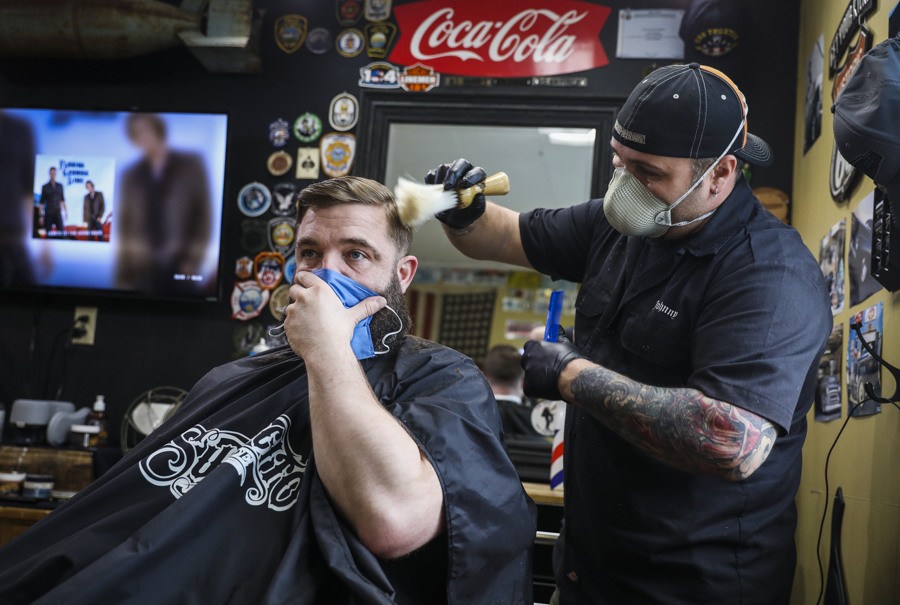 Rusty Razor Barber Shop on the first day of reopening in Kittery, ME on May 1, 2020. (Photo by Erin Clark/The Boston Globe via Getty Images)

Some days, it’s hard to keep track of just how long we’ve all been living in these unorthodox and uncomfortable ways. Has it really only been two months since things went so completely and life-changingly off the rails?

But there is one unmistakable sign of how long I’ve been in quarantine, and it’s sitting in a wild, bushy heap on top of my head. Thanks to what turned out to be hilariously bad timing, I’ve now gone without my monthly haircut for about three months, and despite what many of you are apparently doing in self-isolation, I will not risk a botch job by tackling my typical hairdo myself, or risk marital strife by asking my wife to do it for me. So now when I show up for Zoom meetings, I’ve got no choice but to hide the unkempt mass my hair has become under a baseball cap, at least until it’s safe to have it tamed professionally.

My options will change next week, when Massachusetts barbershops will be given the green light to reopen—cautiously, and with very strict new rules about how they can operate safely. But is it really time to get back to the barber’s chair, a place where social distance goes entirely out the window, and a stylist has no choice but to hover inches from your head? Is it really worth it?

That’s the question countless walking bad hair days like myself will be facing as we enter the first phase of the state’s slowly reopening economy, and there are no easy answers.

Bear in mind, the rules are about to get a lot more strict. Lengthy guidelines published by the state on Monday call for a number of safety measures that will make your neighborhood hair cuttery look more like a surgical theater.

For one, the days of strolling in off the street for a clean-up are over, at least for now. In an effort to control the size of the queue at salons, hair cuts must be offered appointment-only. Patrons waiting for their turn in the chair will have to wait outside while standing six feet apart, and indoor waiting areas will need to be closed.

Barbers and hair dressers will also only be allowed to offer haircuts, blowdrying, and hair treatment services. Beard trims and upper-lip-hair waxing services are off limits.

Shops are also being asked to keep an up-to-date log of which customers come through and when, to help with contact tracing efforts in the event of an outbreak. If a positive case is linked to the shop, it will need to be shut down and deep cleaned before it can reopen.

These are extraordinary safety measures. So extreme that, as Mayor Marty Walsh said at a Tuesday press conference, city officials have heard from several barbershops and hair salons who say they will not be able to comply with all of the guidelines, and thus will not be able to open. That level of attention to detail would, however, certainly make me feel a lot better about going back to my barber again than I would if we lurched back to the way things used to be: unmasked, carefree banter, with particulates swirling between us.

Still, the fact remains that getting your hair cut requires prolonged interaction with someone well inside the six-foot bubble of safety for up to a half hour at a time. So how, when so much of the economy is shut down to keep this very type of interaction from happening, have barbershops been consistently among the first businesses to resume when states begin reopening?

Joseph Allen, assistant professor of exposure assessment science in the Department of Environmental Health at Harvard T.H. Chan School of Public Health, who has written about the risks involved in spaces like airplanes and office buildings, says that while the risk of transmission in an environment like a barbershop is never going to be zero, steps can be taken to minimize the threat to a reasonably acceptable level. He says it’s important to consider how even in a worst-case scenario, a barbershop is never going to pose the same level of risk as, say, a bar or office packed with coworkers and drinking buddies. So ultimately it comes down to decisions made by individuals—i.e., guys with unbearably shaggy hair—to weigh the risks for themselves.

“From a population standpoint, if one shop didn’t get everything right and one or two people got infected, it shouldn’t set off a super spreader event, like the Biogen conference or the cruise ships,” Allen says. “Maybe going to the barbershop is not all that necessary for me, but for some people it might be—for their mental health, their well-being, or maybe even just that little bit of social interaction—so they need to assess: Is it necessary?”

Not everyone is bullish on reopening the salons, and there’s plenty of reason to be concerned about catching the virus just to get, or give, a cut and color.  In Oregon, some hairdressers even petitioned not to be included in the first phase of reopening in that state, arguing that doing so was unacceptably risky and would put stylists at risk. Instead they asked to be paid unemployment because many of them, as private contractors, weren’t able to apply for the benefits.

Here in Massachusetts, officials also clearly recognize the risk of high-touch personal services is still present: Nail salons, which would seem to require similarly tiny distances between clients and workers as barbershops, will not reopen here until phase two. Same goes for massage or tattoo parlors and day spas.

But for many people, the desire to get that trim they’ve been missing has led them to find them on the sly, getting illicit cuts off the books in living rooms all around the country—places that might not rise to the state’s new hypochondriac-approved standards. The urge to seek one of them out only grows stronger as our hair gets longer. Even as of a few weeks ago, when Maine first let barbershops open their doors, reports abounded of overwhelming demand for long-awaited trims. A family member who has otherwise been extremely cautious about avoiding risky scenarios confided to me recently that, due to the growing size of her pesky roots, she was this close to getting a black market cut in a hairdresser operating under-the-table in Worcester.

Even Mayor Walsh, who has spoken with a cautious tone about reopening efforts, said in a press conference Tuesday that he’d consider getting a cut himself next week. “I certainly would like to get a haircut. I haven’t gotten one in a while,” he said, adding with a shrug, “So the answer to the question is you’ll see me Monday.”

I asked Boston Barber Co. owner Robert Dello Russo (who also happens to be Walsh’s barber) about all this, and he says that while he’s eager to get his pair of combination barbershop and tattoo parlors in the North End and Beacon Hill up and running again—it’s cost him more than $20,000 a month to keep them closed—he sees the reopening as bittersweet. The North End native is confident he can get his shops up to the new safety standards and teach his staff to operate an online booking system by next week, and says much of his team is ready to get back to work, but some are still nervous about close contact with clients and may opt to stay home instead.

Even when he does open, he worries the vibe he spent years cultivating at his shops—where guys saunter in off the street, belly up at the café, and shoot the shit before it’s their turn for a trim—may not return for a while. After all, the barbershop experience is about a lot more than giving customers fades and applying pomade.

“I’ve run my shops like it’s 1950 for so long. It’s walk-ins only. We’ve never taken appointments. It’s like a party every day in there. Part of the ambiance of the place is the people that are in there, and the banter that goes back and forth, and guys just hanging out,” he says. “I think we’ll survive and be alright, but the identity of my shop has been completely stripped from me. I worked so long and hard making this a neighborhood staple. Now it’s a men’s salon by appointment only, where a masked man cuts your hair, and that’s all it’s gonna be.”