A Boston Dirt Bike YouTuber Speaks Out: “They Think We’re Not Human”

A 19-year-old "scooter boy" explains the allure of the noisy pastime, and why the "bike life" community is probably here to stay. 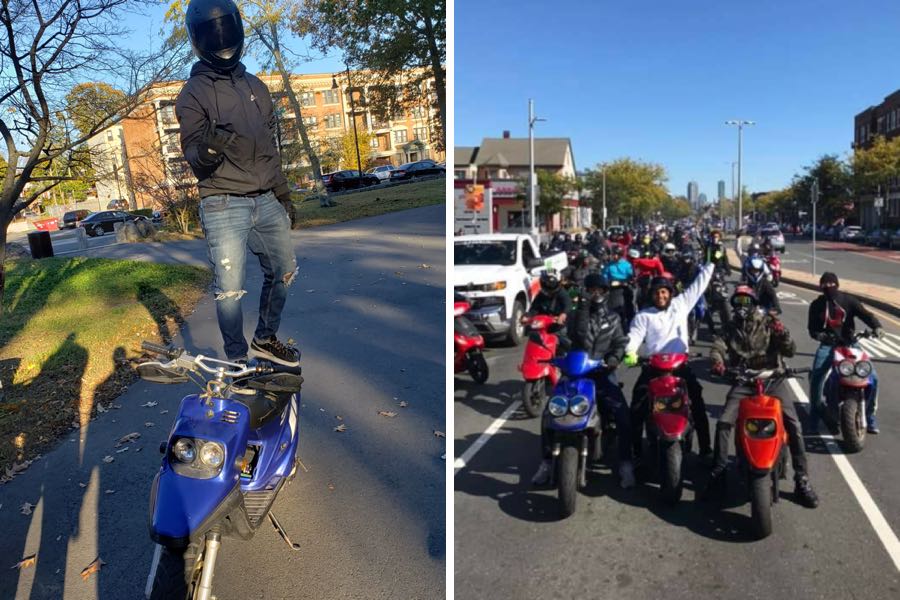 In Boston in recent days, it’s been hard to miss the increasing furor over noise and dangerous encounters linked to the city’s “bike life” community, a group of stunt-loving, wheelie-popping hobbyists known to pilot high-powered and illegal dirt bikes, ATVs, and scooters at all hours through the streets and in public spaces, particularly Franklin Park. But largely absent from the debate over how to respond to their growing ranks have been the riders themselves, most of them young men of color from Boston and surrounding cities. So we asked one, a 19-year-old YouTuber who goes by the name “Yung Remy” and who spent years documenting the bikers’ exploits from the seat of his souped-up scooter, for his side of the story. His comments have been edited and condensed.

I started at around 13 years old on a pedal bike. Most people look to level up to a scooter and then a dirt bike because it’s more powerful. They’ll start on a 50cc, then move up to a 125cc, or a 250cc, maybe even a 450cc. People like the thrill they get from that. But I never rode a dirt bike. I was a scooter boy. Scooters are for the people who want to stay relatively on the legal side, because there are a lot of consequences that come with riding a dirt bike on the street. Most people understand that, but they’re gonna do whatever they want and there’s nothing I can say to stop them. The city can’t either, because people are going to do what they want to do.

It’s been blowing up the last two years. By 2021 it was definitely a big dramatic change. People keep meeting each other and everything is getting bigger. Now, like, there’s over 400 riders daily. I can’t deny that my videos definitely play a part because people watch them, and there’s a lot of people posting on Instagram, Facebook. So other people in New York, Connecticut, Rhode Island, or wherever, see what we’re doing and come over here to ride with us.

Franklin Park is, like, our spot. When we’re at Franklin Park we’re trying to stay out of people’s way. Being on the street is a little more risky, especially if you’re not the best rider. It’s a spot where we lay low and don’t want to cause a scene. It’s a place to chill and relax. I see the parties that are going on late at night, up until six a.m. There have also been a couple of accidents recently. There was an older man who got hit and was seriously injured because of a dirt bike rider. People kind of fuck it up for us. Now we have the whole city talking about it.

Neighbors say the music from parties in the park is so loud that it rattles windows a mile away and goes on until 6 a.m. https://t.co/Xlz03HJ1is

I see the comments people say about retaliating against us. “Get these guys off the street. Get them out of Franklin Park.” And it’s like wow, all we want to do is just ride and stay out of trouble. We do this because we don’t like where we’re at, the situation we’re in with our lives, you know what I mean? But, guaranteed, you get on that bike and you’re gonna smile every single time. I come from East Boston, so being from a neighborhood that has a lot of drugs and gun violence, I had to grow up from that. These kids are really trying to get off the streets. They don’t want to sell drugs. They don’t want to fight each other. They don’t want to shoot each other. A way of doing that was being on these scooters.

I think it’s kind of sad because people have been doing this for decades, dating back to the ’80s and ’90s. It’s not something new. People feel like they can put us down now. They think we’re not human. Racism is definitely a part of it, judging a book by its cover. I know a lot of the dudes in the scene and they’re lovable and friendly, you know what I mean? All we want to do is ride and mind our business.

I live in the most gentrified neighborhood in Boston. Now that rents are going up and more houses are being refurbished, more people are moving in from out of state or from the suburbs to inner urban areas. All the zoning is changing. So places where people were riding, like big parking lots or behind factories, are now becoming residential. So now the complaints go up. People want us out because it’s loud or we’re playing loud music, and it’s crazy because nothing is new. People who’ve lived here 40 or 50 years will tell you the same thing. Nothing has changed.

I’ve heard people talking about giving us part of Franklin Park, like a piece of land dedicated to riders. That sounds awesome. That’s, like next level. Even with the [Lynch Family Skate Park in Cambridge] it was a big hassle to get that from the city, but once they built it, you saw how skateboarding and BMX riding in the city went down. They left the Common and went to the skate park. If we did the same thing for dirt bikes, I swear to God we’d probably see maybe one or two dirt bikers on the street rather than a whole pack of people.

I remember Exit 18 [when police corralled a large group of bike and ATV riders on I-93 and one rider was shot]. I was there for that big ride out, but I went home before that happened. It was crazy. A couple of my friends got hit in the head with batons by state troopers because they were trying to get away. And then one of the kids on an ATV got shot in the foot. I feel like when police do raids they do not such a bad job, but when it comes to stopping us on the street like that, you put everybody in danger. They put other riders in danger, they put themselves in danger, and the pedestrians on the street. Anybody will tell you that. So technically there’s a “no chase law” for that reason. But now [police] are trying to find other ways to get you, through videos or photos or whatever.

State trooper shot somebody at Exit 18 during the dirt-bike melee on I-93 https://t.co/O2cxJJTWfY

I was still riding after that but I stopped around three years ago. I love bikes. I’m “bike life” to the end of me. But I had other personal goals I wanted to achieve. So if I got arrested on a bike or something, I didn’t want that to affect my future. I thought of the bigger picture. I hadn’t graduated high school yet and it was definitely holding me back. For two or three years I was putting everything into it. I learned how to build them, taking off every single bolt and knowing where it goes. Those are things school will never teach you. Now I’m more into the car scene. I have a shop where I paint cars for a living and I do auto collision repair.

People are getting nervous. At the end of the day, people know there are consequences, especially for riding illegal dirt bikes on the street. But what they are not afraid of is the love, the passion for bikes. So they’re going to do it regardless. They’re not gonna stop, I’ll tell you that right now.