Can “Quarantine and Chill” Last a Little Longer, Please?

There’s a lot we’ve lost during the pandemic. But when it’s all over, what will happen to the things we’ve found? 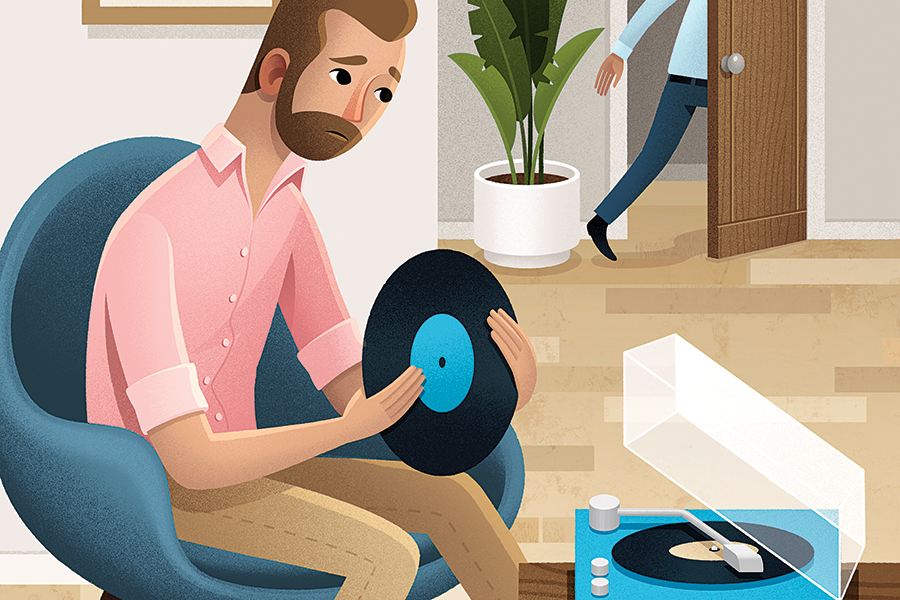 I was standing by the microwave when I heard Edward shout from another room, “I got my vaccine appointment!”

I winced. Not outwardly, of course: That would have been poor form. His voice was so excited—in early April, this was like winning the vaccine lottery!—that I couldn’t do anything but meet his glee with a “yay!” and put down my freshly nuked cup of coffee to give him a big, tight hug.

I was excited, too—really, I was. There’s nothing I want more than for the people I love to be safe and stay healthy, and no one wants to endure a pandemic that has already cost far too many lives and livelihoods a day longer than necessary. Besides, after 13 months of near-constant living with my fiancé in a two-room Jamaica Plain apartment, a process that went smoothly insomuch as we are both still alive to tell the tale and the wedding hasn’t been canceled, I was thrilled by the news of such a big, important step toward getting back to normal.

Still, I couldn’t deny it: My first response was to recoil at the notion of returning to the old normal. Wild, right? There was so much life in the outside world to regain. Yet I wasn’t thinking of that.

Instead, I thought first about what we stood to lose: The precious extra time we spend together, now that we both work remotely. The saved money and healthy habits we’ve developed, now that we spend more time cooking and entertaining ourselves at home (and more time running outside and hiking, to offset the long hours indoors). The little dance parties we throw midafternoons, whenever both of us need a shot of energy to get over the workday hump. I’ll pop a needle on a record and shove aside some furniture, then we’ll boogie for a minute the way I can vaguely remember my grandparents doing to Donna Summer in their living room, back in the days when couples had more time to spend together. (Incidentally, Bad Girls is in heavy rotation in this household, too.)

I love all of these things, and somehow there had never been space for them in our world before. After all, the typical breakneck pace of modern existence in metro Boston—not to mention the bumpa-tah-bumpa traffic—didn’t often allow for stopping to smell the roses.

Don’t get me wrong: As Massachusetts rounds the corner on a final reopening plan, I’m reminded of the things I’ve missed dearly about pre-COVID life in Boston. I’ve missed the energy of being in the crowd at a concert, whether watching a pop star at the Garden or an indie band at Brighton Music Hall. I miss the dreamlike escape of live theater, from Broadway tours at the gilded Wang to a bawdy burlesque show held somewhere with sticky floors. I’ve missed dancing under a disco ball at one of Boston’s few remaining gay clubs and feeding drag queens dollar bills with my teeth.

Although I’ve continued to dine out on restaurant patios, I’ve missed bumping into friends at busy bars, especially bars with a karaoke machine in the corner. I’ve also missed watching weird midnight movies with night owls at the retro Coolidge Corner Theatre, where the silver screen is draped in heavy red-velvet curtains, just like—well, just like in the movies.

Many of us have a list like this, a list of things we’ve missed. After all, these are the kinds of places and experiences—communal experiences, mostly—that draw people to cities in the first place. There’s a lot you can get in the suburbs: space, parking, great deals at HomeGoods. But what you can’t get is the pulsing neon energy that remains unique to cities, a kind of permanent wakefulness that can exist only in a place where a whole lot of people are living, working, and playing right on top of one another. It’s a beautiful thing.

Losing all of that over the past year, and so suddenly, has been excruciatingly hard. I’m not a natural homebody. There’s always something I want to do, somewhere I want to go, somebody I’m planning to see. If there is white space on my calendar, I take it as a challenge.

The act of doing stuff, in other words, is an IV drip of my favorite drug, and the pandemic ripped the line right out of me. I crashed. I remember early on in the shutdown, sitting alone in my car in the wee hours of the morning a few blocks from where I used to go to work. Sheets of rain poured down the windows. I just wanted to be out of the house. I howled into the nothingness.

To cope, I tried concentrating on what I could responsibly do under the circumstances, instead of what I couldn’t do. Use your brain, don’t lose your mind became my personal mantra.

Could I still enjoy the day out with family and eat a feast in the North End? No, but I could pick up platters of manicotti from Hanover Street and bring them to my sister’s backyard, where she strung up Christmas lights and an Italian flag. Could I plan a dinner-and-a-movie date night with Edward? Not one that involved a recycled-air-conditioned cineplex, but we could still eat takeout at one of the new drive-in theaters in the suburbs, car windows rolled down to feel the warm summer breeze. Because every plan outside the home became a complicated process that required greater forethought and arranging (and possibly a very tickly nasal swab), it made me far more sensitive to what I really needed—and what I could do without. As a result, I spent my money, time, and energy more wisely, on the things and people that mattered most—and made me happiest.

I also found more time to slow down and focus on myself. Without a chorus of clanging weights around me to motivate my workouts at the gym, I finally returned to my abandoned yoga practice. I decided to prove to myself that I could still do a backbend. Guess what? It took about six months, which is about one-tenth of the time I’d previously spent complaining that I “wish I had the time to get back into yoga.” I felt like I’d hopped off a carousel of constant motion I hadn’t realized I’d been riding handcuffed.

Maybe you’d been riding it, too. Think about it: Back in the before-times, did you often feel like you were throttling rapidly forward with little ability to appreciate the present? Did the constant onslaught of things clamoring for your attention make it difficult for you to concentrate? Was your “to-do” list, one full of important personal- and professional-development aims, infinitely growing and devouring itself, like a snake eating its own tail? If you answered “no” to any of these questions, can you sell me your magic potion and/or subscribe me to your newsletter?

Of course, these confessions are often delivered with a side of guilt and embarrassment—with so many people putting themselves in danger to work on the frontlines or struggling to feed their families, no one wants to be caught saying, “Life is good, actually” right now. Still, the reality is that for all of the restrictions in place, many of us have also regained welcome freedoms: The freedom to organize a daily schedule more effectively. The freedom to say “no thanks” to something you don’t really want to do. The freedom to focus and tune out the white noise. The pandemic, in other words, helped us trim the fat. Hell, I haven’t tweeted in 11 months, and it’s been like Jenny Craig for my brain.

In the end, it turns out that even a social butterfly like me can find a lot to enjoy in a simpler life. Does going back to normal have to mean losing that?

It was St. Patrick’s Day in Boston, but there were no parades or bar parties this year. So instead of stumbling along on a pub crawl, I laced up for a nighttime run from my apartment to Boston’s Franklin Park. My sneakers slapped city pavement, then dirt, then grass. I glanced over my shoulder to make sure that Edward was still behind me; he can outrun me any day, but he graciously hung back so that I could lead us to a destination I’d chosen as a surprise.

Up ahead in the park, cutting through the black of night, was a bright green glow. As we ran closer, it came into focus: a large arched stone bridge illuminated by lights. It was one of several tucked-away sites lit green after dark by the Emerald Necklace Conservancy in a thoughtful, weeks-long effort to give locals a new reason to explore their urban backyard. A half dozen or so of these bright-shining bridges dotted the conservancy parks over the span of a couple miles, and throughout the month I’d made a point to try to hunt them all down as if they were Pokémon, netting myself nothing but the reward of a brief diversion. (And, okay, some blurry Instagram pics.)

I don’t know why these simple emerald attractions charmed me so—I guess one’s standards for excitement plummet by month 13 of a pandemic—but they had a similar effect on Edward, who broke into a big smile as the bridge came into view. It’s hard to run with a bottle of Guinness in your pocket, so I broke out a small celebratory joint to split while we bathed in the lights of the green-glowing tunnel and tried to spot what few stars we could see from the city. There were no leprechaun sightings, but otherwise it was a perfect St. Patrick’s Day.

When else would this have happened? I’ve lived in Jamaica Plain for about 10 years now and never celebrated St. Pat’s in this way before—heck, I barely even knew there were paths and green space until recently.

In many ways, the shutdown encouraged me to explore my city more, not less. Similarly, social distancing meant I saw far fewer people, but the interactions felt more meaningful. Everyone seemed more neighborly, more talkative, more candid, more real. Strangers at nearby patio seats struck up hellos; friends reached out to check in more. And when my pals and I did finally meet up for a backyard bonfire or picnic in a city park, there was one thing that nobody checked: their iPhones. Everyone was too busy just enjoying being there. Remember what that was like?

I do, and I don’t want to forget it. In the end, that’s really what I’m afraid of—not that the world will go back to normal, but that I will. That I’ll get addicted, once more, to the speedy tempo and glut of bright, shiny distractions begging for my limited brain space and budget. That artificial schedules and infinite impositions will cause me to neglect the people and things to which I really ought to give my time. So no, I don’t want to go back to “normal.” Normal life leaves little room for living. We need a vaccine for that.