Market Basket Is Better Than Trader Joe’s, a New Ranking Has Decreed 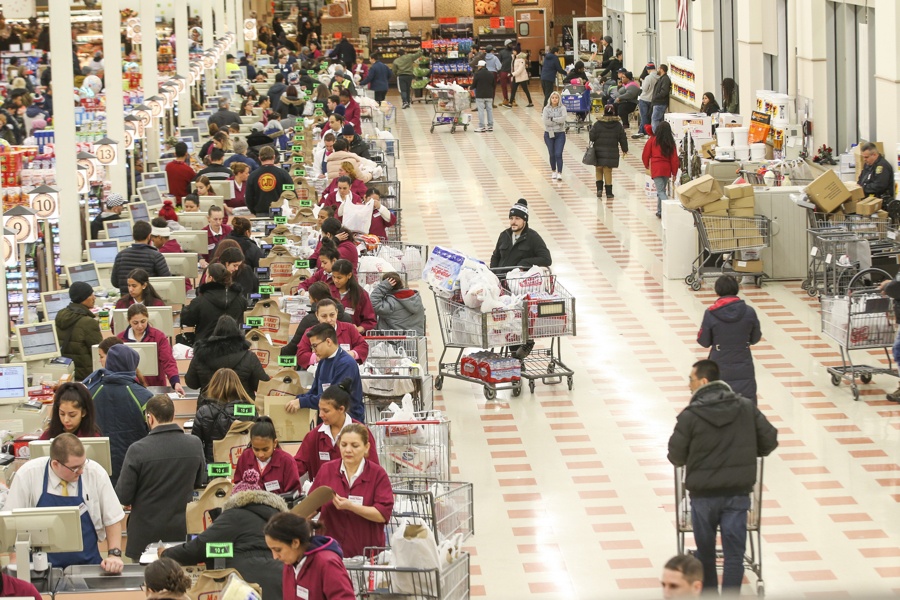 Shoppers stock up at the Chelsea Market Basket before a storm in 2019. Photo By Nicolaus Czarnecki/MediaNews Group/Boston Herald

Everybody seems to have strong feelings about their grocery stores these days. Loyalty to your favored brand of supermarket—be it Price Chopper, for the bahgains, or (ooh la la) Roche Bros. for the experience—runs deep.

But as all the truly fanatical supporters know, there is no fandom quite as rabid as the one that surrounds Market Basket. The king of the pre-Pats game stampede. The winter storm warning Thunderdome. Owner/operator of the most delightful Instagram account in the game.

Somehow the place where the cashiers wear ties is also miraculously the cheapest grocery store around. And who can forget the baffling-to-outsiders saga wherein employees walked off the job not to demand better working conditions but to support a beloved executive.

So cue the duck boat parade, because Market Basketeers everywhere have just earned a freshly baked batch of bragging rights: A new ranking has placed the Tewksbury-headquartered grocery chain in third place nationally, bumping out prior bronze medal-holder Trader Joe’s.

The ranking comes to us via reputable assessor of such things dunnhumby, a London-based customer data science company. Its findings, according to a press release, are based on a number of factors, among them financial performance and (notably) “lasting emotional bonds formed with customers,” that make up something it calls a Retailer Preference Index.

Authors of the report elaborate by saying Market Basket excelled w/r/t “its continued excellence on Price and Operations, while simultaneously making its biggest Covid-era improvements in Speed.” If you have a need for Speed, evidently, get your butts over to Market Basket.

First place, it seems, goes to a mom-and-pop institution called Amazon, owner of Whole Foods. Second: Texan grocer H-E-B. Directly behind Market Basket is Wegmans in fourth. Amazon Fresh was sixth, and Aldi was sixth. Trader Joe’s, land of the cookie spread, has been shunted to seventh.

Now I’m aware that TJ’s also inspires a sense of loyalty among the shoppers in your life who can’t stop talking about the obscure snacks and fanciful dry goods (and who have observed, maybe correctly, that it has what might just be the greatest frozen food section in the Greater Boston area). But can you really root for a company rooted in Pasadena when a local legend like Market Basket is in contention?

So here’s to you, MB. The next time a fellow bargain-hunter at the Market Basket in Chelsea slams his cart into mine at full speed en route to a BOGO sale on seltzers, I’ll let it slide for thee, the third-best grocery store in the nation.