A new series takes a closer look at the iconic brand's clubs, one of which had a controversial run in Boston. 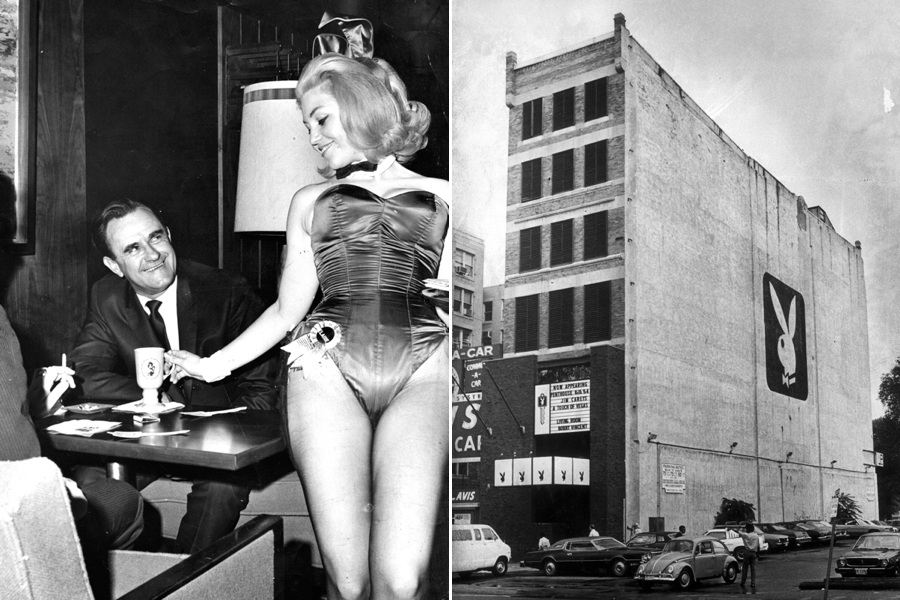 Richard Griffin of Stoneham is served by Playboy Bunny Elaine at the Playboy Club in Boston circa July 1968. (Photo by Charles Dixon/The Boston Globe via Getty Images)

Back in 1966, when Playboy was at the height of its power, one of the iconic brand’s clubs opened its doors in downtown Boston, just steps from the Common and the Public Garden (at the site where the Four Seasons currently stands).

It was, as many Bostonians still remember, a major controversy at the time. The club scandalized the city, no doubt helped along by the gigantic mural of the Playboy Bunny logo painted on its facade, and spawned protests from women’s liberation groups who said its presence was harmful to the movement. Others saw the club’s arrival differently. As the Boston Globe recounted a few years ago after founder Hugh Hefner’s death, it helped advance the cause of sex-positivity and empowerment for women, who found that working as a “Bunny” for the club gave them a sense of agency they couldn’t find elsewhere—not to mention the chance to meet to some big-name VIPs.

But as a new A&E docuseries demonstrates, there was an often dark underside to the clubs, which by the 1970s had nearly two-dozen locations scattered in cities across the country. Secrets of Playboy, which began airing earlier this month, takes a fresh look at what was going on behind the scenes at the company. An episode airing on January 31 will zero in on the scandals that unfolded in the clubs. The episode does not mention the Playboy of Boston club specifically, but does offer a harrowing look at what life appears to have been like for the “Bunnies” who worked in the much-talked-about Park Square lounge at the time.

Former Playboy employees, including both ex-“Bunnies” and security personnel, describe how women hired to work as rabbit ear- and cottontail-clad waitresses in clubs like the one in Boston were protected from the advances of men while working in the club—the rules specifically forbade guests from touching them—but outside the clubs, it was often a very different story. Particularly with famous and powerful men, the women were encouraged to mingle and accommodate their needs, which sometimes included going home with them. As the documentary shows, this led to some dangerous circumstances, including cases (including a famous one in 1978) in which women were kidnapped, drugged, and assaulted. And as the filmmakers allege, Playboy was covering all of it up.

“If anything scandalous happened, we had to clean it up so it wouldn’t hit the press, and it certainly wouldn’t go to the police department. And there were scandals in every club,” PJ Masten, a former Playboy “Bunny Mother,” recalls in the upcoming episode. “You weren’t allowed to take them to a hospital. You had to call Playboy security, and Playboy security had to handle everything. That was the ‘cleanup crew.'”

Maybe that will come as no surprise to Boston protesters, who made a point of picketing outside the club regularly during its 11-year run. Photos from the time show demonstrators waving signs reading “WOMEN ARE NOT SEX OBJECTS” during a 1973 protest. The club was also a checkpoint along the marching route for the women who stormed and took over a Harvard building in 1971, which was immortalized in a documentary of its own, called Left on Pearl, in 2019. 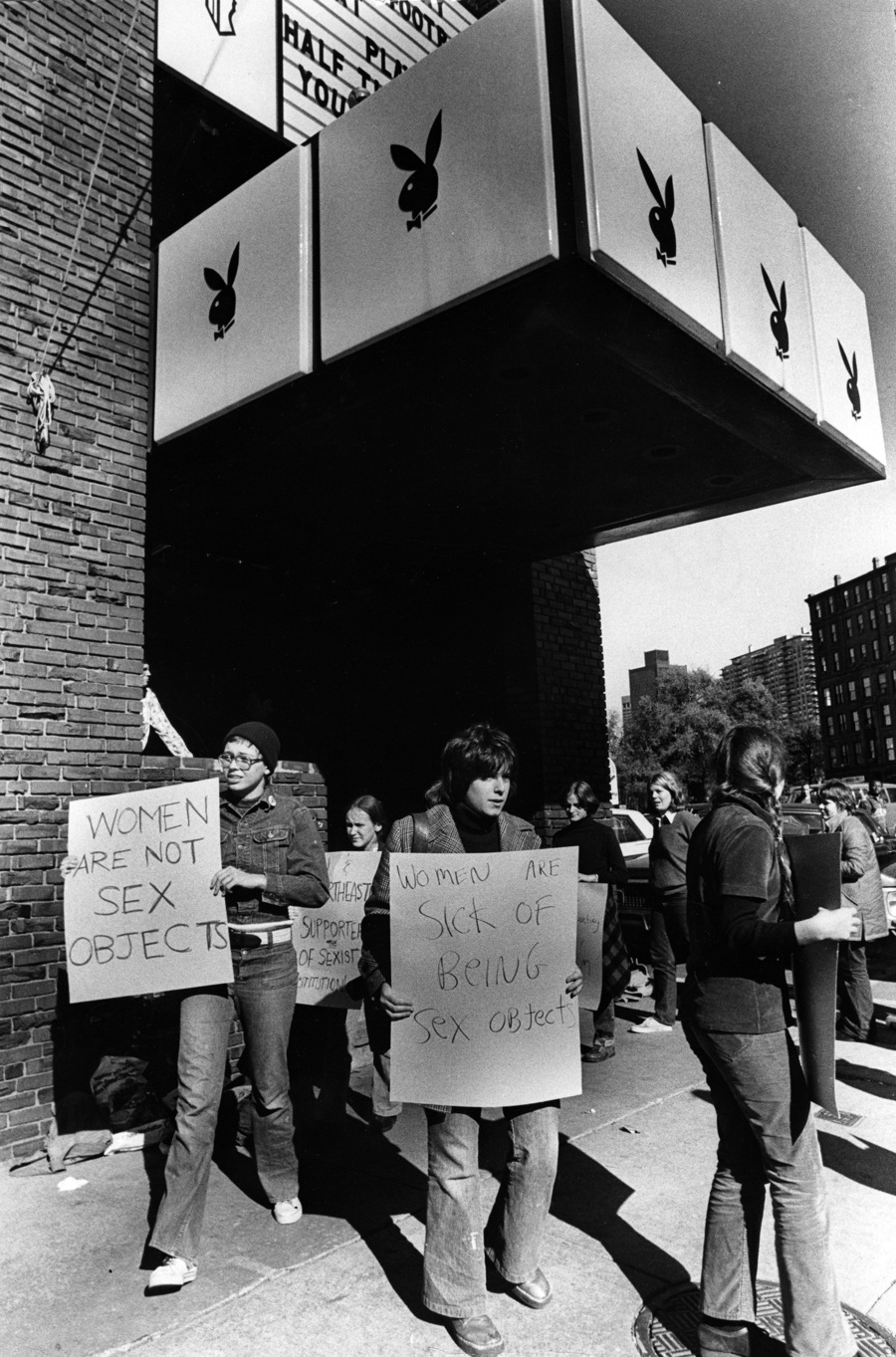 There are many other allegations of mistreatment behind the scenes in the A&E series, among them the exacting and cruel body image standards to which the “Bunnies” were forced to adhere. Some of it, including descriptions of what went on in the infamous Playboy Mansion out in LA, is hard to watch.

But Secrets of Playboy sheds some important new light on what exactly was going on inside those infamous clubs, including right in Boston’s front yard.

Secrets of Playboy, a 10-part docuseries, premiered January 24 on A&E. Its next episode, “The Bunnies & The Cleanup Crew,” airs Monday, January 31, at 9 p.m. 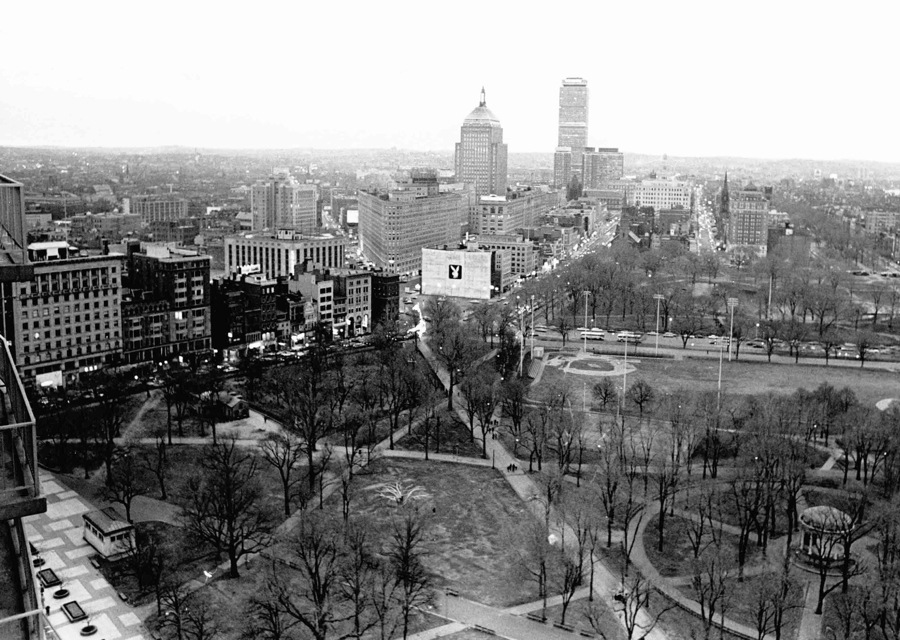 A view of the Playboy Club of Boston in Park Square, Dec. 9, 1968. Photo by Boston Globe Archive/The Boston Globe via Getty Images