The debate over who counts as a local has been raging for decades. Finally, we have the answer. 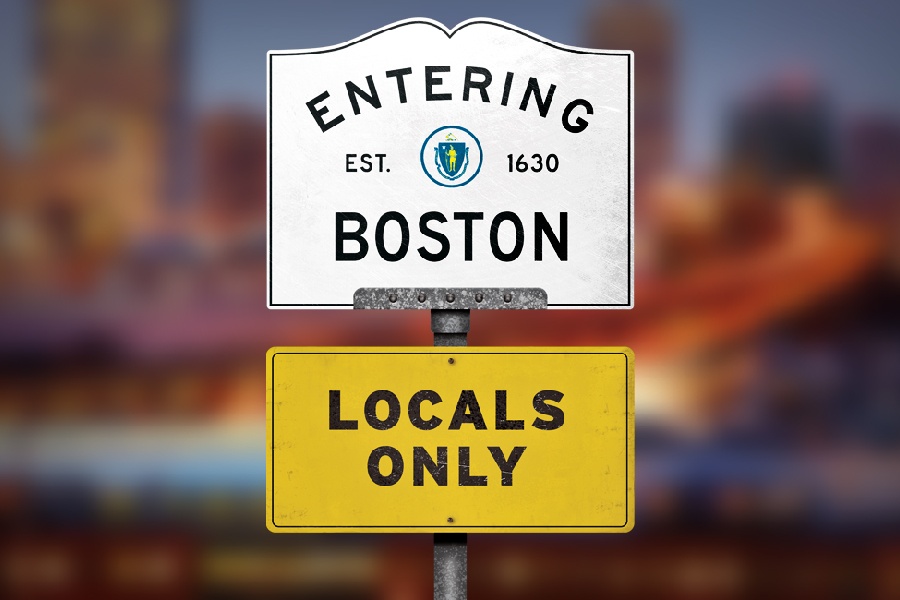 I‘d been living in the Boston area for nearly 15 years when I came across a stark reminder that—at least to some—I still didn’t count as a local. It was the final stretch of the mayoral campaign, and I’d caught wind of a controversy stemming from the most Boston of moments: a Boston Public Radio interview with Jim and Margery. GBH radio host Margery Eagan had asked mayoral candidate Annissa Essaibi George what separated her from her opponent, Michelle Wu. One of the distinguishing factors she mentioned was that she was “born and raised” here. Jim Braude asked her if that really mattered, and Essaibi George doubled down. “It’s relevant to me,” she said, “and I think it’s relevant to a lot of voters.”

The moment was brief, but the damage was done. Essaibi George’s comment became the focus of several local news stories, ultimately ending up in the New York Times. Social media was afire, arguing over what it all meant. In a flash, Boston was drowning, once again, in the eternal debate over whether having long-term roots here matters.

I may be going out on a limb, but I’m not totally sure the fact that your mother delivered you in a local hospital makes you better qualified to run the city. More to the point, though—or at least my point—is that the unspoken comment on Wu’s Boston cred felt like it was aimed at me, too.

Maybe that’s because Wu and I have a few things in common. We’re around the same age. We’re both from the Chicago area. And we both moved to Boston during early adulthood and found something that spoke to us and kept us here, a thousand miles from where we’d grown up. Sure, we’ve chosen slightly different paths since we arrived—she’s raising a family in Roslindale and is a boundary-breaking mayor, while I’m murdering plants in an old apartment in Cambridge and haven’t changed out of sweatpants since September 2020. Still, despite our divergent journeys, when the notion that Wu wasn’t from here was raised as a relevant factor for voters to consider, suddenly, I could hear an invisible chorus of voices telling me, You’ve picked this place, you’ve loved this place, you’ve embraced this place…and it will never accept you.

It’s no secret that Boston has a longstanding reputation for being provincial and hostile to outsiders. And there, in a single campaign comment, that stereotype was on full display—in an episode that made national news, no less. The fact is, a locals-only Boston is not the city I know and love. My Boston is modern, cosmopolitan, increasingly diverse, and vibrant. So why do some residents continue to believe that if someone wasn’t born here, they don’t have a right to a say in our city’s future, or a sense of belonging or even ownership of the place they choose to call home? Why, in 2022, are we still debating who are the fake Bostonians—and who are the real deal?

Today’s tension between so-called locals and outsiders has a lot to do with how much the city has changed in recent years. No city is static. As people from other countries and other parts of the nation move there in search of opportunity—or to create opportunities for others—cities grow and evolve. Boston is no exception.

Still, for a long time, and not so long ago, Boston didn’t experience that much change and growth. Between 1980 and 2010, the population rose at a paltry rate of 0.3 percent annually, mainly due to international immigration. Then it exploded—at least in relative terms. From 2010 to 2016, the most recent period for which the Boston Planning & Development Agency has data, city population grew at a rate of 1.6 percent annually. That’s over double the country’s average rate, which was a more staid 0.7 percent annually.

So, if you’re thinking Boston isn’t what it used to be, you’re damn right it isn’t. That much change, that fast, is often said to be indicative of a thriving economy that draws people to a city. It also causes upheaval, and brings with it unfortunate side effects for many longtime residents. Chief among them is a rising cost of living. Boston is on target to become the second-most expensive rental market in the nation.

All change involves loss, and the pinch is being felt by both residential and commercial tenants, all of whom are struggling to stay in the neighborhoods they’ve long occupied. In a way, it might be most accurate to say you become a so-called real Bostonian the first time your heart breaks because a business you love has been forced out by rising costs. And it’s understandable that you might become a Bostonian who resents outsiders when you can no longer afford to live in the neighborhood you’ve long called home.

Japonica Brown-Saracino, a sociologist at Boston University who has studied social preservation and gentrification, says that feeling of displacement when a neighborhood changes is common. “People think of places as enduring, and especially the cultures of places as stable, when in fact they rarely are. They’re constantly evolving,” she says. Wherever you live, you get to know a neighborhood as a certain ineffable thing—this restaurant here, this beloved bar there, these neighbors next door. As those things change and are replaced by new businesses and neighbors, it’s hard not to feel the toll. The problem is that warm and fuzzy nostalgia can quickly harden into resentment toward whatever—and whoever—is new.

At the same time, it’s important to acknowledge that the very things we imagine a particular area to be are completely subjective. For instance, Brown-Saracino points to Medford, a place many people think of as heavily Italian but which only experienced a surge in Italian residents during the latter half of the 20th century as a result of urban renewal policies in Boston. Or Provincetown, which likes to tout its history of Portuguese fishermen, when WASP whaling captains and artists have been in the town just as long, she says. In other words, the people that we choose to identify as the real residents of an area are just that: the people we’ve chosen.

Despite the recent mayoral campaign, Boston’s national reputation for provincialism is sort of meaningless on a day-to-day basis if you already live here. You and I both know that Boston has always been, and will always be, more than a series of facile stereotypes, and that debating and rejecting those stereotypes will remain a pastime here as long as Hollywood remains enamored of us. Case in point: Despite not having been born here, Wu was elected mayor by a landslide.

As Bostonians, we need to let this endless debate over authenticity and newcomers go. After all, it has very real and concerning consequences. Just look on Reddit, where people anxiously post that they’re interested in moving to Boston but feel the need to ask the forum whether it really is such an unfriendly town to new people. Twitter is awash with arguments about locals versus newer residents every time someone brings up the topic of developing new housing. If the general impression of Boston from outside the city is that it’s a place where newcomers won’t feel welcome, then people might be that much more inclined to choose another place to live, particularly if it means they don’t have to put up with our frigid winters.

Cities are most vital when bustling with progress: new restaurants, new art, new voices shaking up the status quo. I arrived to the Boston area when the city council had one woman serving on it and not a lot of diversity. Today, the body is dominated by women and has just inaugurated both the first Haitian-American member and the first Muslim—who’s also the first formerly undocumented member. I’ve watched the city’s dining scene go from slim pickings to the type of town where you have so many exciting options it’s hard to decide where to eat next. And I’ve seen Boston really, honestly try to grapple with who it is and who it wants to be, just like I did when I first moved here.

Countless other young people are now choosing to claim Boston as their own and to call themselves Bostonians. They’re finding plenty to love in its neighborhoods, its food and music scenes, and its world-class intellectual life and sports teams. They’re forming the kinds of meaningful bonds with the people they meet and the places they frequent that turn a city into their city. If Boston wants to embrace its future, it would claim them right back. Just like it has by electing Mayor Wu, regardless of where she was born.