A Four-Story Bookstore Is Coming to Beacon Hill This Summer

Even in a city like Boston, which is chock full of academics and thus, bookstores, the opening of a new literary establishment is still exciting. And one with four stories of books and a cafe inside? Even better. If this idea tickles your fancy, plan on taking a trip to Beacon Hill later this summer to check out the incoming Beacon Hill Books and Cafe. The grand opening on Charles Street will happen in August, per the store’s publicist. Helmed by Boston local Melissa Fetter, it will fill a literary gap in the neighborhood and increase options for bookworms across the city.

Expect books in a range of topics spread across all of those stories. On the second and third floor, you’ll find general interest books for the jack-of-all-trades. The third floor will have two additional rooms dedicated to travel and aesthetics, with art, architecture, and design books, as well as fiction and non-fiction tomes that expose the readers to different corners of the world. Level four is for young readers of all ages, from those in children’s books to those venturing into the young adult genre, while you’ll find cookbooks in the cafe on the ground floor.

The shop’s restaurant/cafe will be led by Chef Colleen Suhanosky, who foodies may recognize as the owner and chef of Rifrullo Cafe in Brookline. The eatery will offer everything from breakfast to dinner and even an afternoon tea in between for those craving a snack. There’s also room for community events in the cafe, courtyard garden, and third floor, where there’s a salon for intimate readings.

This new shop will occupy one of the few remaining original Greek Revival buildings on Beacon Hill in what was once the Hungry I Restaurant, according to the Beacon Hill Times. The 3,000 square-foot space, which went on the market in late 2018, served as home to both the restaurant and several apartments. But the listing at the time noted the building was “ready for renovations.” 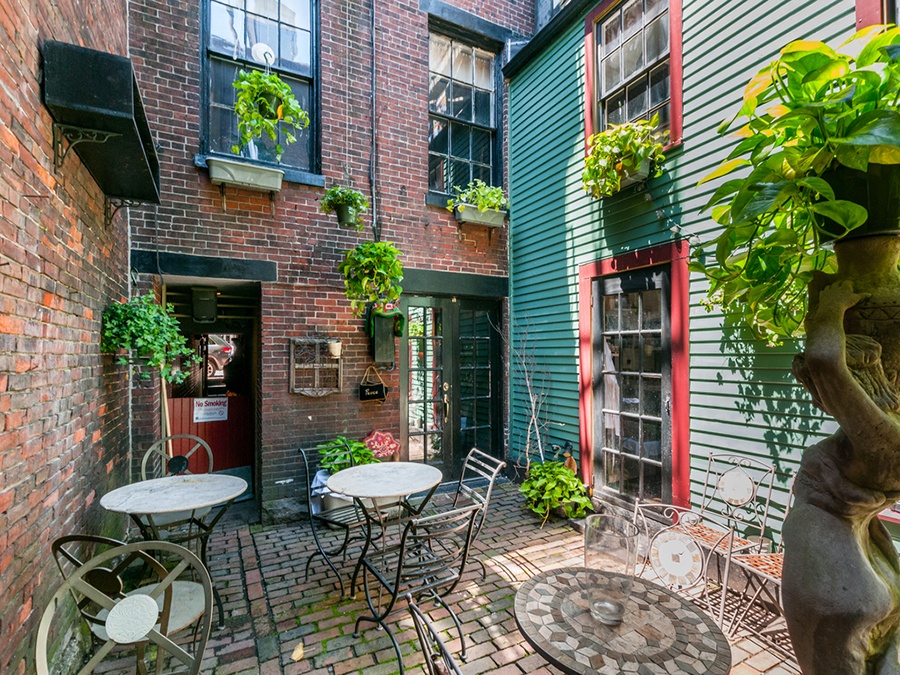 The courtyard at the Hungry I restaurant. / Photos via Keller Williams Real Estate

Rather than do a teardown and slap up a modern establishment in its place, local architect Monkia Pauli of Pauli and Uribe Architects renovated the structure to restore it to its former glory, while also bringing it into the twenty-first century. The design also incorporates elements of whimsy, like the small entrance door on the children’s level, aiming to delight tiny visitors, and the model train with a steam whistle that will snake in and out of rooms on the same floor.

The interior work was done by Cathy Kincaid of Cathy Kincaid Interiors, who worked with American fabric and wallcovering company, Sister Parish Design, to create custom fabrics and wall coverings throughout the store and cafe. August, come faster!