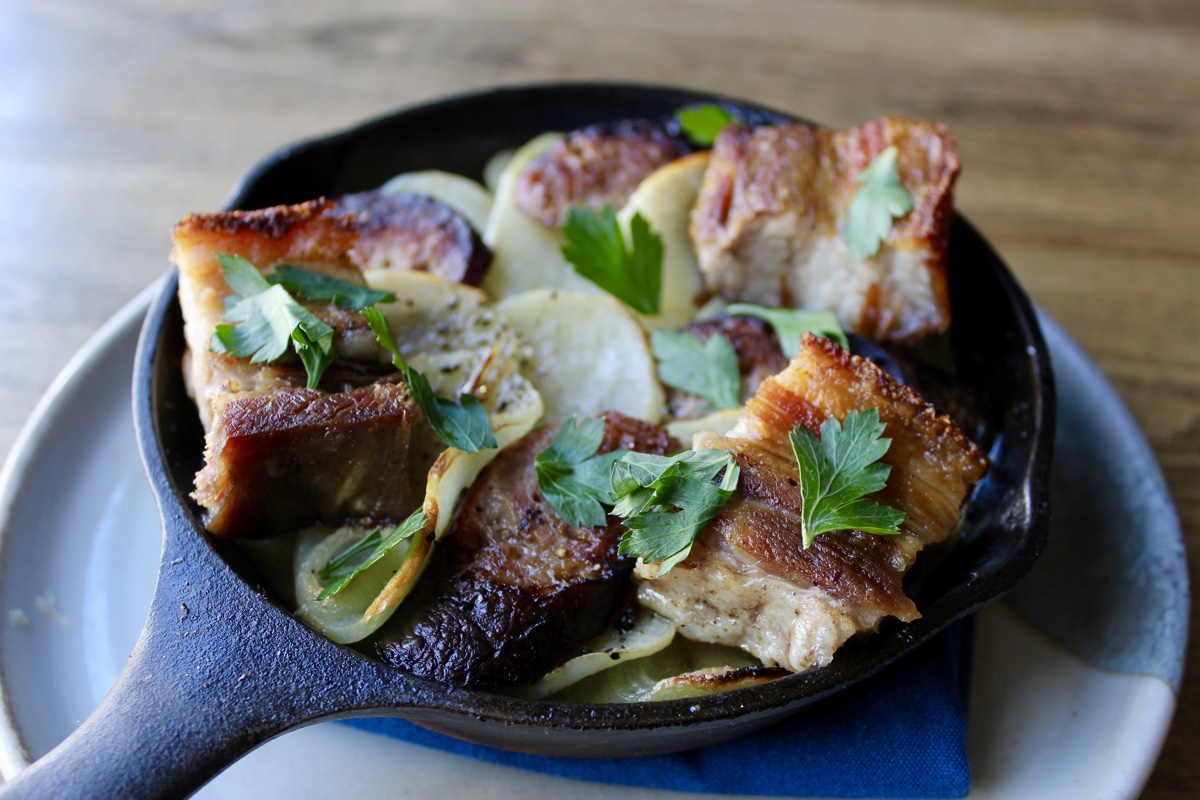 The day I asked Loyal Nine chef and co-owner Marc Sheehan if he had any Irish recipes he’d like to share, he had just received a message from his mother asking him what night he could come over for boiled dinner. It’s his favorite thing: She uses a smoked pork shoulder, instead of the more traditional corned beef.

“I would consider my mother to be a very good cook, but the smoked pork shoulder might be the best thing she makes,” he says. And “she’s very particular with how she stages the cooking,” Sheehan says. “It’s an all-afternoon affair.”

She starts the pork in liquid first, to develop an intense, smoky, but still light broth, in which she cooks turnips, rutabagas, potatoes, and cabbage. She serves the meat and vegetables with just a splash of vinegar, and spicy mustard. The Sheehan family eats this meal only once a year, around St. Patrick’s Day.

Otherwise, his family didn’t really eat too much Irish food when he was growing up in Milton—“other than putting globs of butter on everything,” he says—but the Holy Cross history alum and brain behind the East Cambridge homage to Colonial cookery knows his stuff.

“Considering the fact that Ireland was never a particularly wealthy nation, it’s very much a cuisine of subsistence,” he says.

But the traditions are still delicious: The verdant land produced pigs, sheep, and cows, of course, so like British cooking, the cuisine revolves around animal products—meat and dairy.

“Something to know about the Irish is that because they were frequently somewhat exploited, too, a lot of their best food was exported,” Sheehan notes. “They have a rich fishing tradition, but they didn’t really eat the fish. Live scallops, they have great oysters, Dublin Bay prawns, those things could fetch a higher dollar if it was being exported. Think of fish and chips: That’s how people are eating fish over there.”

Obviously, that’s less the case these days. But to celebrate this heritage—deliciously—Sheehan has provided a few simple side dish recipes and a dessert, to accompany your boiled dinner if that’s what you need on St. Patrick’s Day. Or, he suggests a fresh or smoked haddock filet, ham, smoked pork shoulder, roast chicken, or even a steak to make it a nice meal. And of course, a pint of stout.

Dublin Coddle
“This is basically a gratin of sausages, bacon, potato and leeks, all baked together and served in a casserole. Great with soda bread and a pint.”

Preheat the oven to 350 F. Prick the sausages all over with a sharp fork. Preheat a casserole dish over medium heat and sear the bacon until it’s crispy on all sides. Add in the sausages, hard cider, and thyme. Add just enough stock to cover. Bring to a boil and reduce heat to a simmer. Cook the sausages for 10-15 minutes, then remove and let them rest. Reserve the cooking liquid.

In a large dutch oven, layer the sausages, bacon, onion, and potatoes, sprinkling each layer with a little salt and pepper. Once you’re done layering, ladle over the reserved sausage cooking liquid, just to cover. Dot the casserole with a few knobs of cultured butter, cover with parchment and place it in the oven. Cook until potatoes are tender, about one hour. Let it cool slightly, then garnish with chopped parsley and serve hot. 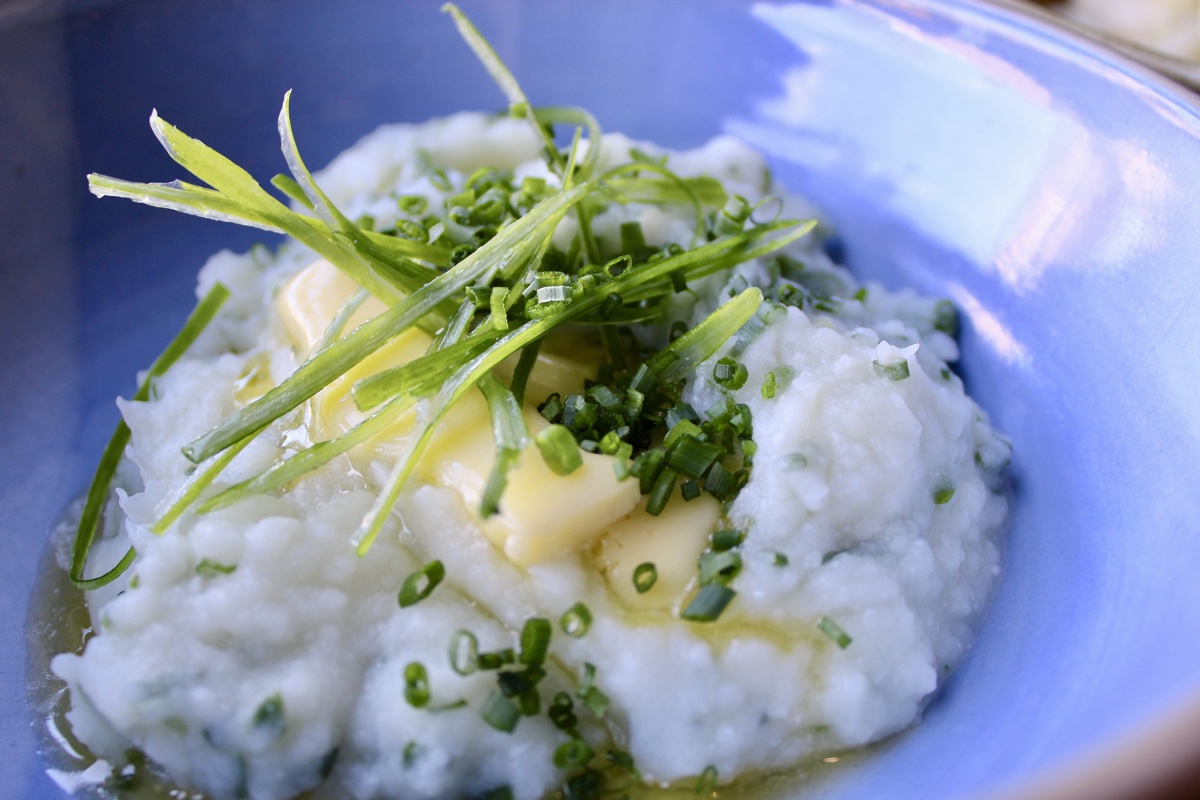 Champ
“Traditionally served in a mound with a hole in the middle, and a big pat of butter sitting in it slowly melting.”

Place potatoes, garlic, thyme and peppercorns in a pot with enough water to cover. Season aggressively with salt. Bring to a boil, reduce to a simmer, and cook until the potatoes are tender, about 15 minutes. Drain, peel, and mash, without overworking the potatoes. Cover the potatoes and keep them warm.

While the potatoes are cooking, melt one tablespoon of butter and add in the shallots and the white part of the scallions. Season with salt and pepper. Gently sweat over medium heat until mostly cooked. Add in the milk, cream and four more tablespoons of butter, then bring to simmer and cook until shallots are soft, about 3 minutes. Place the mixture in a blender or food processor and blend until smooth.

Slowly fold the green scallion tops into the potatoes. Over low heat, add in the shallot cream mixture until it’s fully integrated into the potatoes. Adjust seasoning with the salt, pepper, and lemon juice. Place the champ in a bowl. Make a well in the center and dot with the remaining butter. Top with the chives. 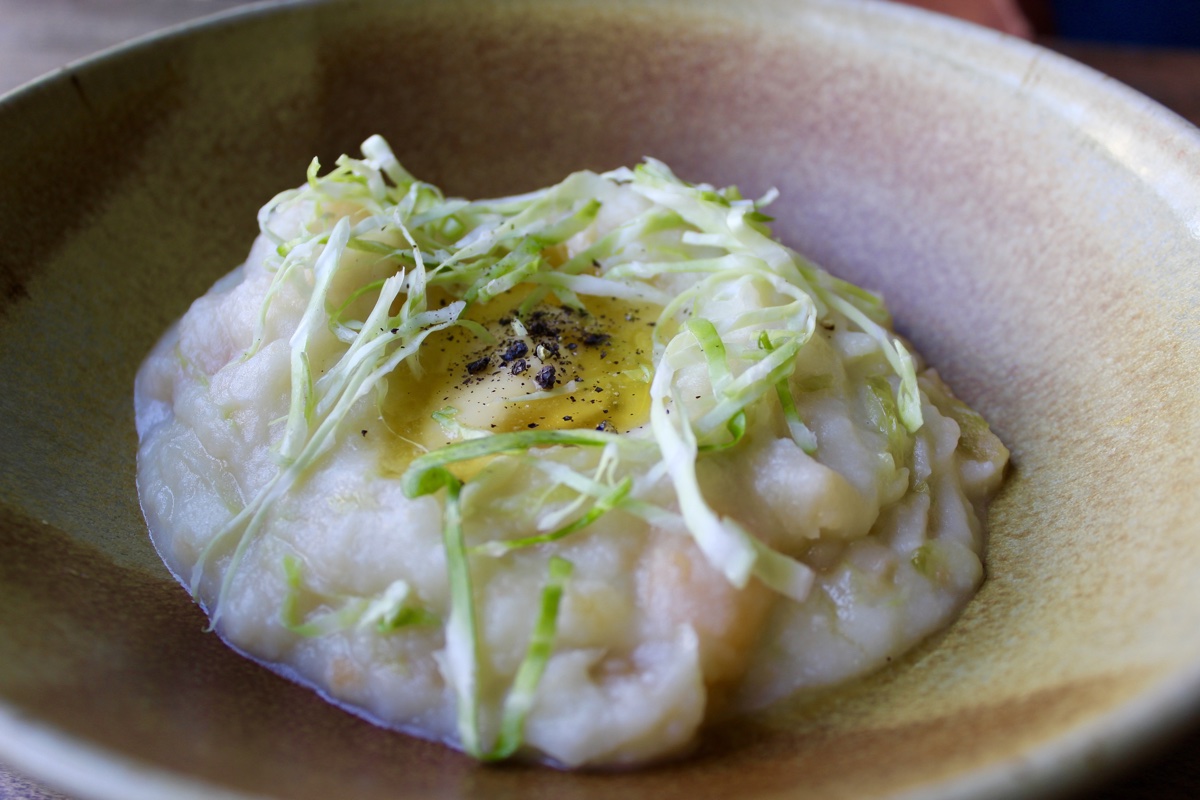 Colcannon
“Some more extravagant recipes have this all cooked inside cabbage leaves. But if you want something simple, this can just be done like mashed potatoes.”

In one pot, cover the cabbage and rutabaga with vegetable stock. Season with salt and simmer 12-15 minutes, until the vegetables are fully cooked. Drain and reserve the stock. Finely chop the cabbage/rutabaga.

Place potatoes, garlic, thyme and peppercorns in a pot with enough water to cover. Season aggressively with salt. Bring to a boil, reduce to a simmer, and cook until the potatoes are tender, about 15 minutes. Drain, peel and mash, without overworking the potatoes. Cover the potatoes and keep warm.

In another pot, sweat the leeks in one tablespoon of butter until they’re halfway cooked. Add in the milk and simmer over medium heat until the leeks are tender. Stir in the creme fraiche and season with mace, salt, and pepper.

Gently reheat the potatoes. Add in the cabbage mixture, followed by the leeks and milk. Add a few tablespoons of the reserved cabbage cooking stock. Lastly, fold in seven tablespoons of butter. It should be the consistency of mashed potatoes. Place colcannon in a bowl and top with the remaining butter. 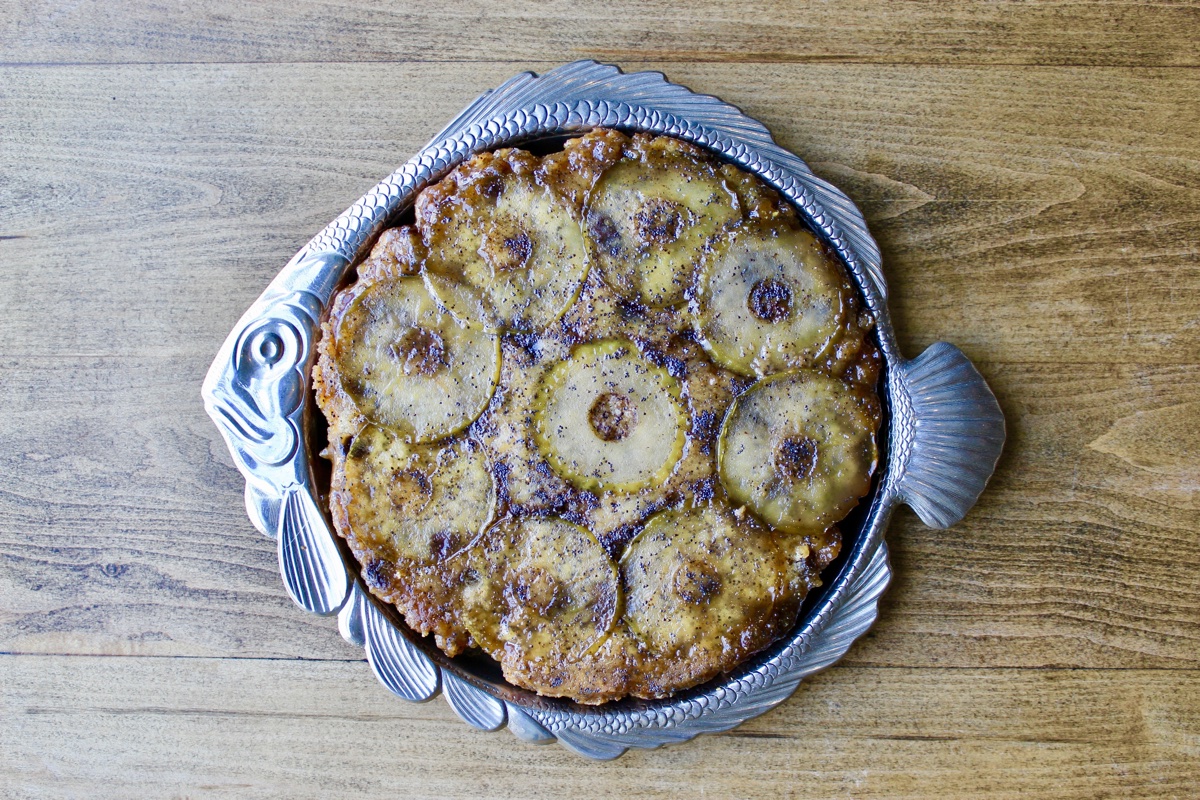 Soak the raisins in the whiskey for 30 minutes.

Preheat an oven to 400 F. Combine flour, baking powder, and sugar. Cut in eight tablespoons of the butter with a pastry cutter until the mixture looks like coarse crumbs. Add in the drained raisins, poppy seeds, and rosemary. Stir to combine and evenly distribute. Add in the buttermilk and stir to form a dough. Lightly flour your clean work surface and knead the dough for 20 minutes. Roll the dough into a 12-inch round circle, place it on a lined baking sheet, wrap and chill it in the fridge.

In a large pan, combine the sugar, reserved whiskey, and the butter. Cook over medium-low heat until the butter melts and the sugar caramelizes. Add in the cardamom and allspice. Add the apple slices, working in batches, and cook 2-3 minutes. Don’t cook completely, as they will bake again. Transfer the apple slices to a tray. Add in the poppy seeds and reduce the caramel down slowly until it thickens.

Line a 12-inch cake or quiche pan with a round of parchment and spray with food release spray. Pour the poppy caramel into the pan. Arrange the apple slices nicely in overlapping circles. Cover with the soda bread dough. Place in the oven and bake until the crust is golden brown and set, about 15 minutes. Let cool 10 minutes. Place a plate on top and invert the cake. Serve warm with whipped cream or ice cream. Cultured butter ice cream would be recommended, to continue the theme, but vanilla works just as well.