12 Hours at the Boston Public Market

For two years, the country's only all-local food hub has been downtown Boston's go-to source for apple cider doughnuts, lively lobsters to cook at home, and all manner of New England-grown produce. We spent a day watching the vendors operate and interact with the public ahead of the BPM's second anniversary this summer. 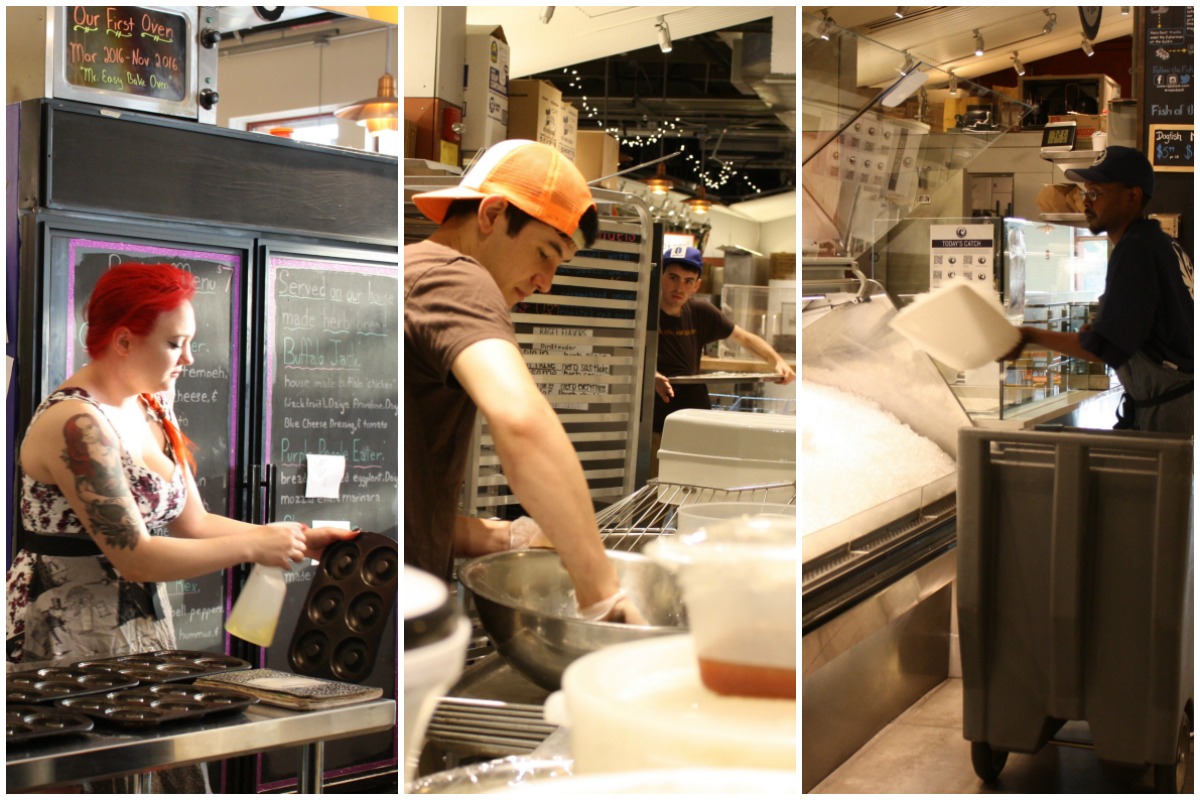 There’s something invigorating about beginning your day at 6 a.m. by walking past a row of nine compost bins.

Entering the Boston Public Market through the sloped loading dock, the only door that’s unlocked (and guarded by security) at that hour, the ripe smell of rotting corn husks, apple cores, egg shells, and animal trimmings—organic waste produced by the 35 farmers, fishmongers, cooks, and other vendors inside—is only the first odor of a day at the downtown food hub.

It’s early, so the next intoxicating smell doesn’t really permeate for another 20 minutes, when baker Jennifer Lee gets her oven going for day. On this July day, her doughnuts are Death by Chocolate, and blueberry crumble. The 24-year-old Lee is typically the first market vendor to work, for what’s the first of her two daily baking shifts to keep up with demand for her gluten-free, vegan baked goods and sandwiches.

It’s easier these days for Lee, a Chelsea High School alum who started a baking company at 17. She debuted at the public market in January 2016 as a short-term, pop-up vendor, using a microwave-sized convection oven—she displays it today with a sign that reads, “Mr. Easy Bake Oven”—that was limited to a 1/3-sized cookie sheet per batch. She was baking from 5 a.m. until 10 p.m. during those days, well before and after all other vendors arrived or left the market. In March 2016, Lee graduated to a full-sized market stall, giving her more than double the space.

4,278 participants in programming at the Kitchen

“We love those stories; that’s like entrepreneurship at its best,” says Cheryl Cronin, CEO of the Boston Public Market Association.

Cronin oversees the 501(c)(3) that operates the bustling market. Seated at a brightly colored table and mismatched chairs on the market floor, near the visitor info booth, Cronin and marketing coordinator Malia Maier are talking with me about the first two years of the BPM—the anniversary is celebrated July 31 this year.

The culmination of more than a decade of groundwork by the BPM association and with support from civic-minded local foundations, the market “expands on the farmers’ market by making it accessible to everybody all the time,” as Cronin explains it. 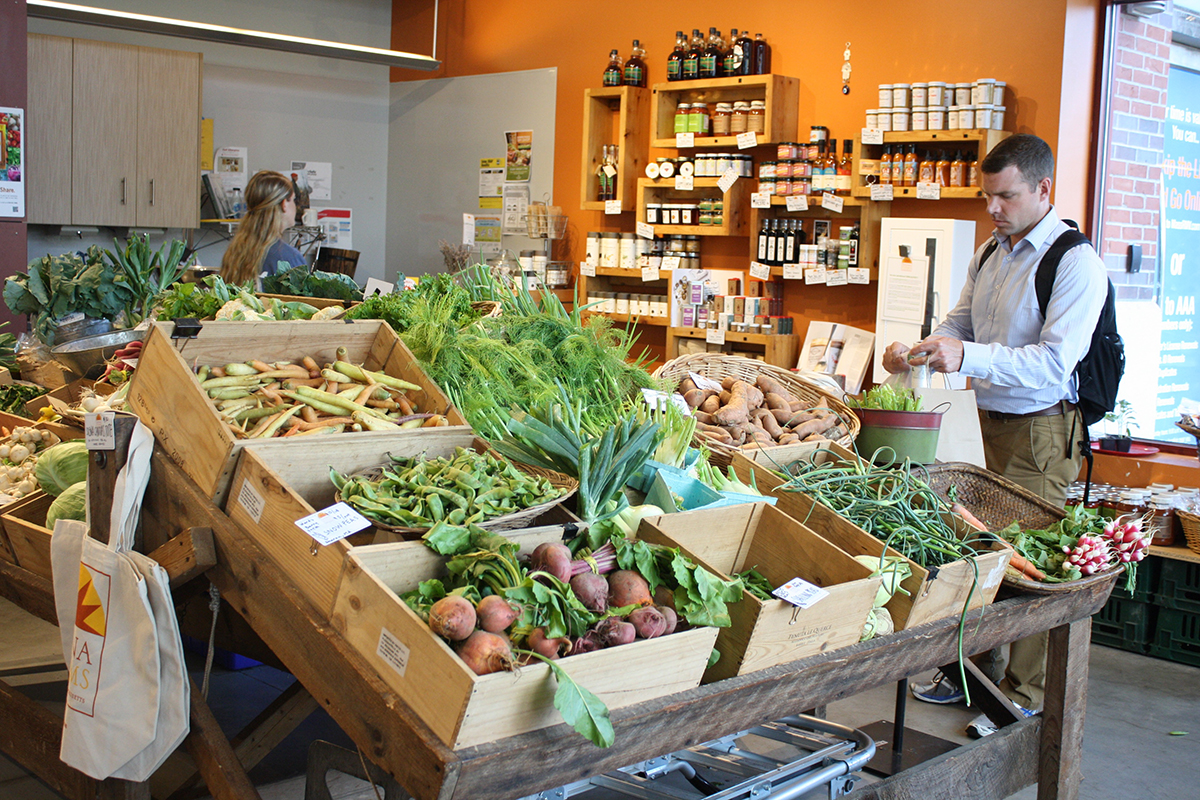 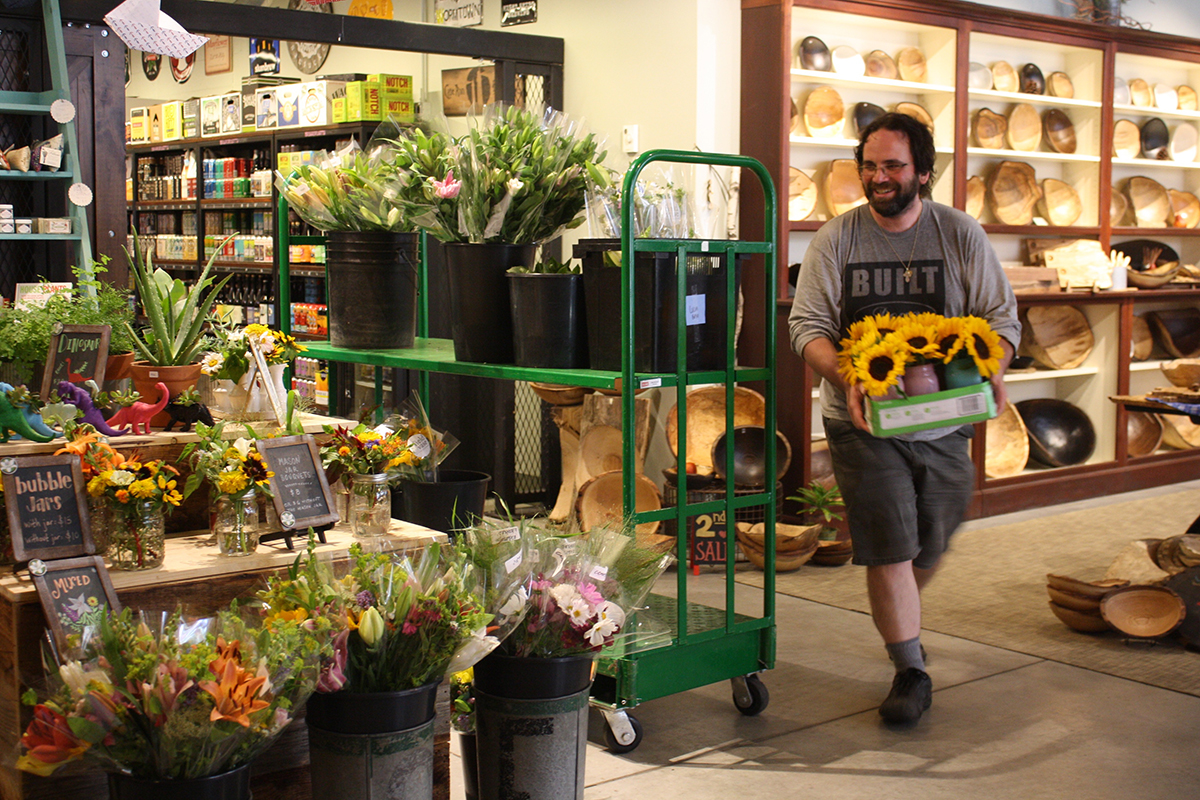 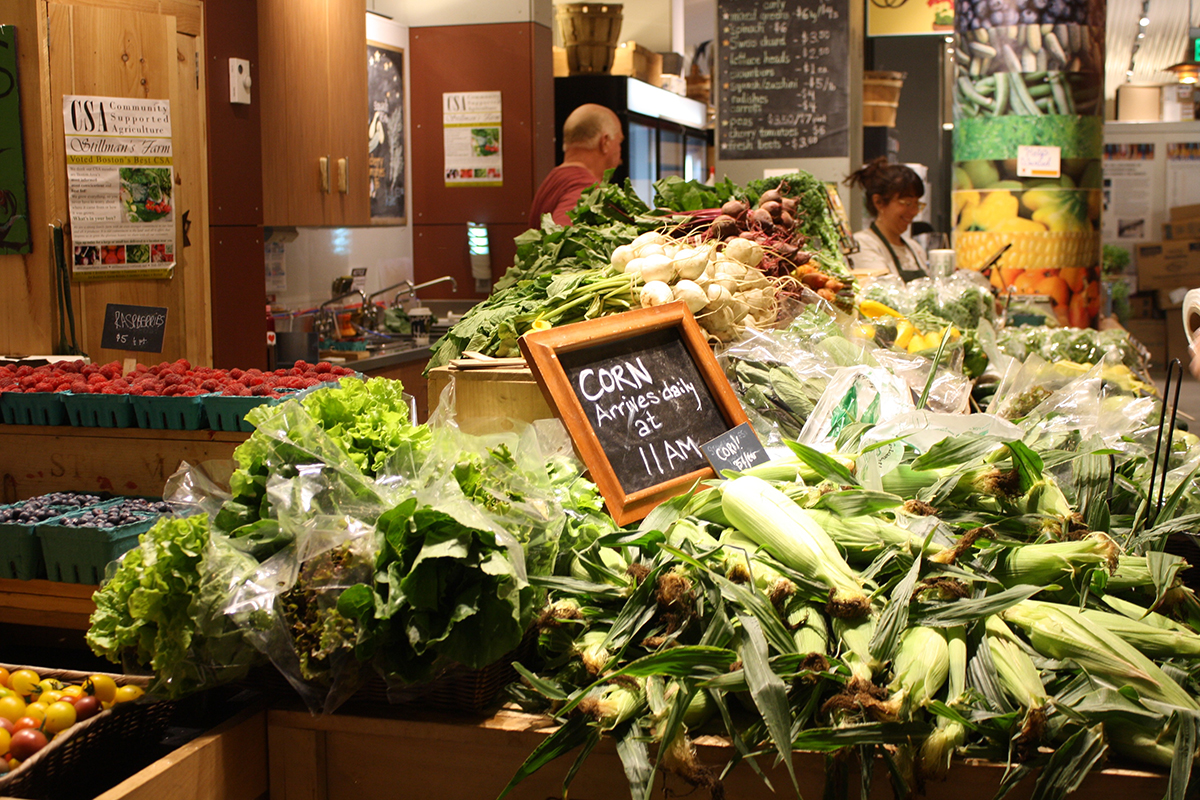 Stillman’s Farm corn is the first in Massachusetts, the Lunenberg farm says. / Photo by Jacqueline Cain 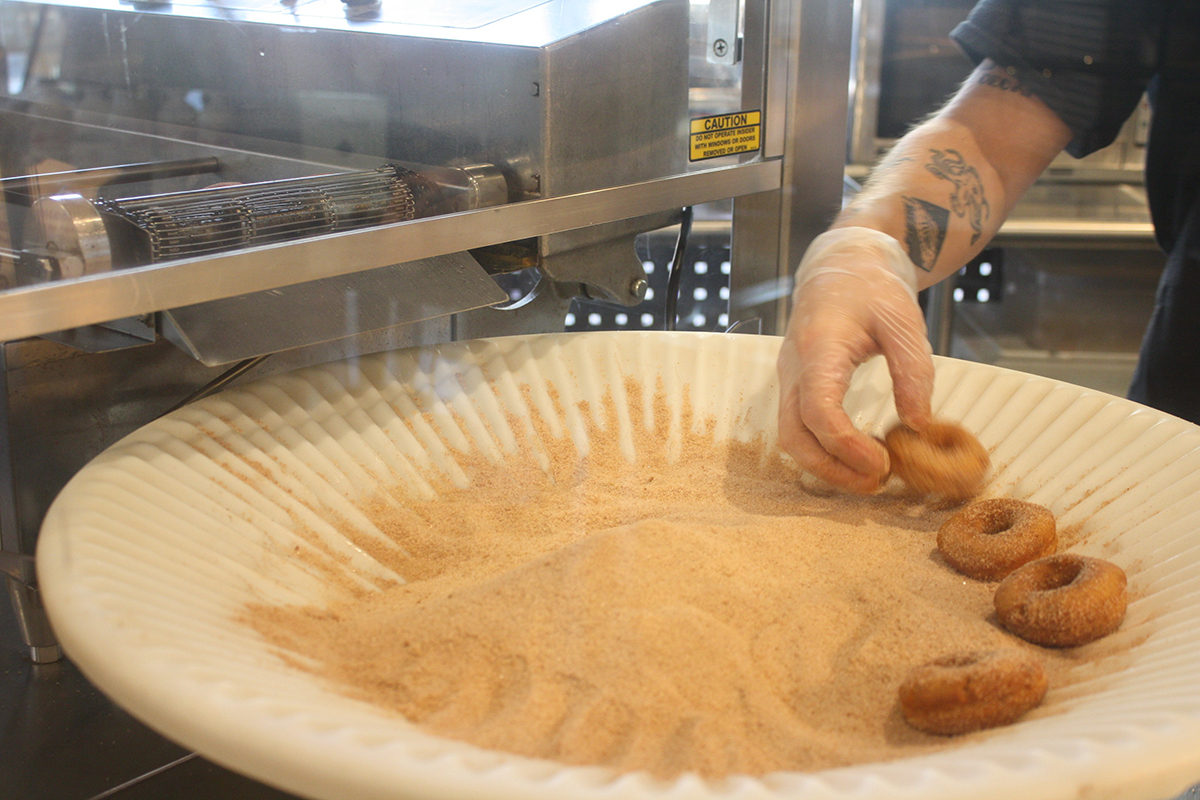 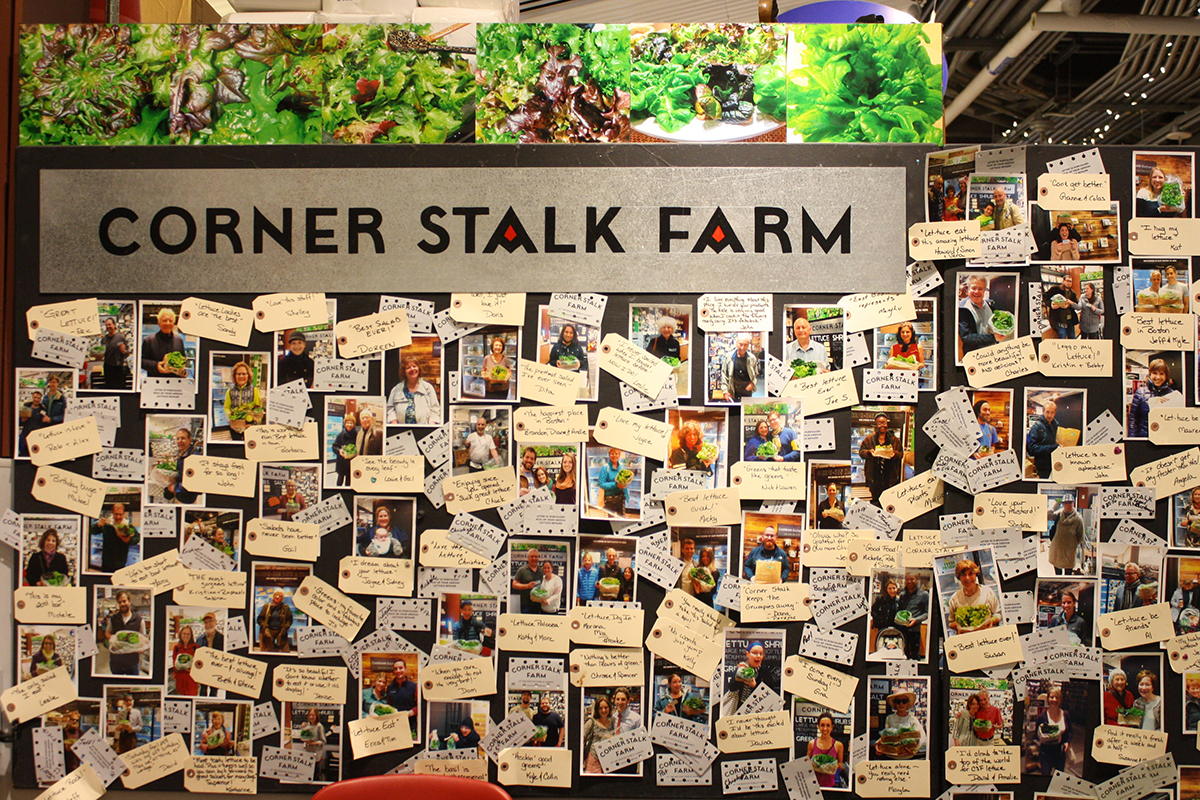 “We want farmers’ markets to be special, but we also want [them] available to you all the time,” Cronin continues, noting it’s only been a year since the BPM opened seven days a week. That’s a prime accomplishment: While the market offers entirely seasonal produce and locally made products, so does the Copley Square farmers’ market, and Central Square’s, and Egleston Square’s…

“If you woke up on Monday morning and the Boston Public Market was closed…you were [going to go elsewhere],” Cronin says. “There’s too many options for people to grocery shop and get food. We’re in downtown Boston—there are people who expect us to be open all the time.” The customer drove the move to open seven days, she says.

But today, it’s not quite open yet. It’s 6:30 a.m., and another couple young entrepreneurs are just clocking in for the day. Alex Jong, the 28-year-old baker behind Levend Bagelry, and employee William Aubrecht get things going on the other end of the 28,000-square-foot space from Jennifer Lee’s Bakery.

Aubrecht is churning High Lawn Farm cream into salted butter, while Jong begins boiling and baking the sourdough rounds he set to cold-ferment earlier in the week. Levend employees will continue the process throughout the day, while serving up approximately 300 bagels and sandwiches over the next 12 hours.

Soon, another distinct Boston Public Market scent begins to waft over. The George Howell baristas have finished rinsing out, warming up, and calibrating their coffee and espresso machines, and they’ve started making the first of the day’s dozens of carafes. Seriously—the Acton-based artisan roasting company replaces the drip coffee every half hour, the manager tells me. 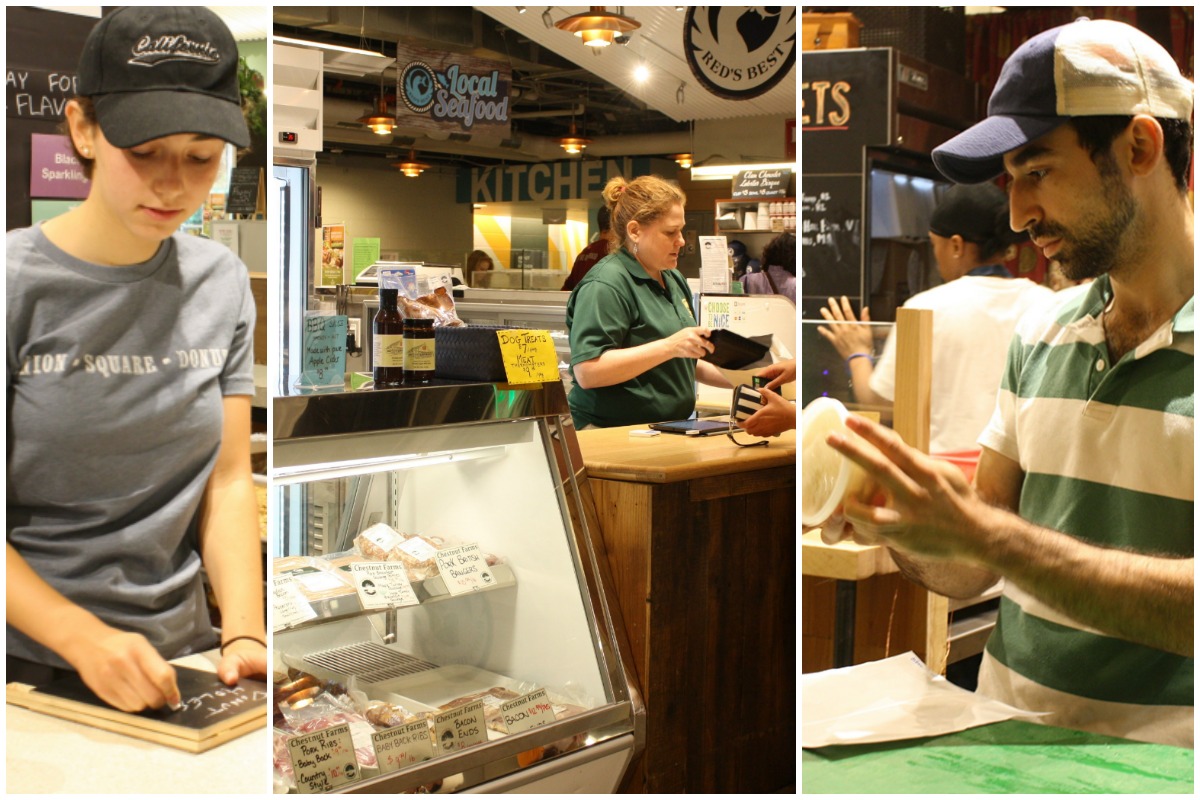 While a Union Square Donuts employee scratches the day’s flavors on a chalkboard (the doughnuts are trucked over fresh each morning from Somerville) just before the market opens at 8 a.m., the sweets you can already begin to smell are the ones being made over at Red Apple Farm’s stall, near the Congress Street entrance. Ben Sanden, the company’s Boston inventory manager, is making the apple cider minis today. He’s worked at the Phillipston farm for almost a decade. The treats he’s now coating in cinnamon and sugar are probably the most iconic of BPM scents—Sanden recalls selling 30,000 doughnuts during the market’s grand opening.

Like most food startups, to pay for its operating costs, the BPM charges vendors a rental fee, and also collects a percentage of their monthly sales, Cronin says. As a nonprofit, the BPM is driven by its mission to provide local food access, not by the bottom line, so it strives to keep rents low, she says, but hasn’t provided Boston with those figures.

“We wouldn’t be here if it wasn’t for the mission. It’s really important, and the mission creates a better market, we think,” Cronin says. “To come into the market and see Stillman’s and Siena [farm stands], but maybe also get your lunch. That’s what we’re going for.”

In addition to the produce grown or selected by the aforementioned farms (two of Massachusetts’ best-known) and grab-and-go lunch spots like the Noodle Lab, Bon Me, and Beantown Pastrami, the market is abundant with locally sourced specialty products, often made right on site. Cronin estimates the breakdown of the current 35 vendors if roughly one-third farmers, one-third makers, and one-third prepared food. Among the products made on site is Nella Pasta. This morning, Avery Perry is extruding semolina-spinach linguini for take-home packages.

“I have the ability to be able to go over to our farms and see what local, fresh produce they have in-house and see what kind of pasta I want to make from there,” the Johnson and Wales graduate says.

For example, to make beet pasta, an earlier season favorite, Perry roasted off Siena Farms beets before puréeing them, and replaced the recipe’s typical water with that nutrient-packed, colorful slurry. Perry oversaw the kitchens in a Charlestown restaurant and café before joining the women-owned small business. Nella Pasta offers good work-life balance for a new dad like himself, he says.

Across the aisle, another dad is demonstrating good work-life balance: Andrew Jarboe hangs his 4-year-old daughter Maren’s helmet on the handlebar of her scooter after handing her a pastry. The “pink” doughnut—it’s Union Square’s raspberry lime rickey—is Maren’s breakfast before a special day with her dad, who’s a teacher on summer break. 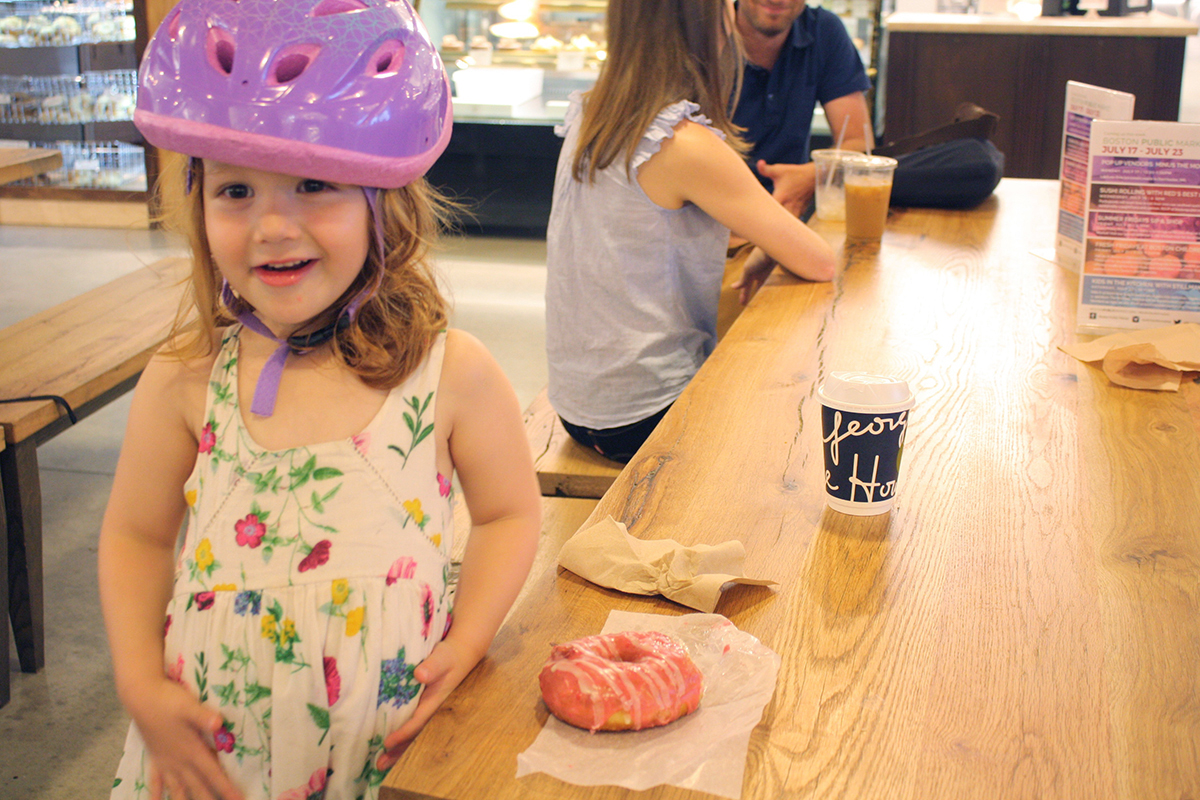 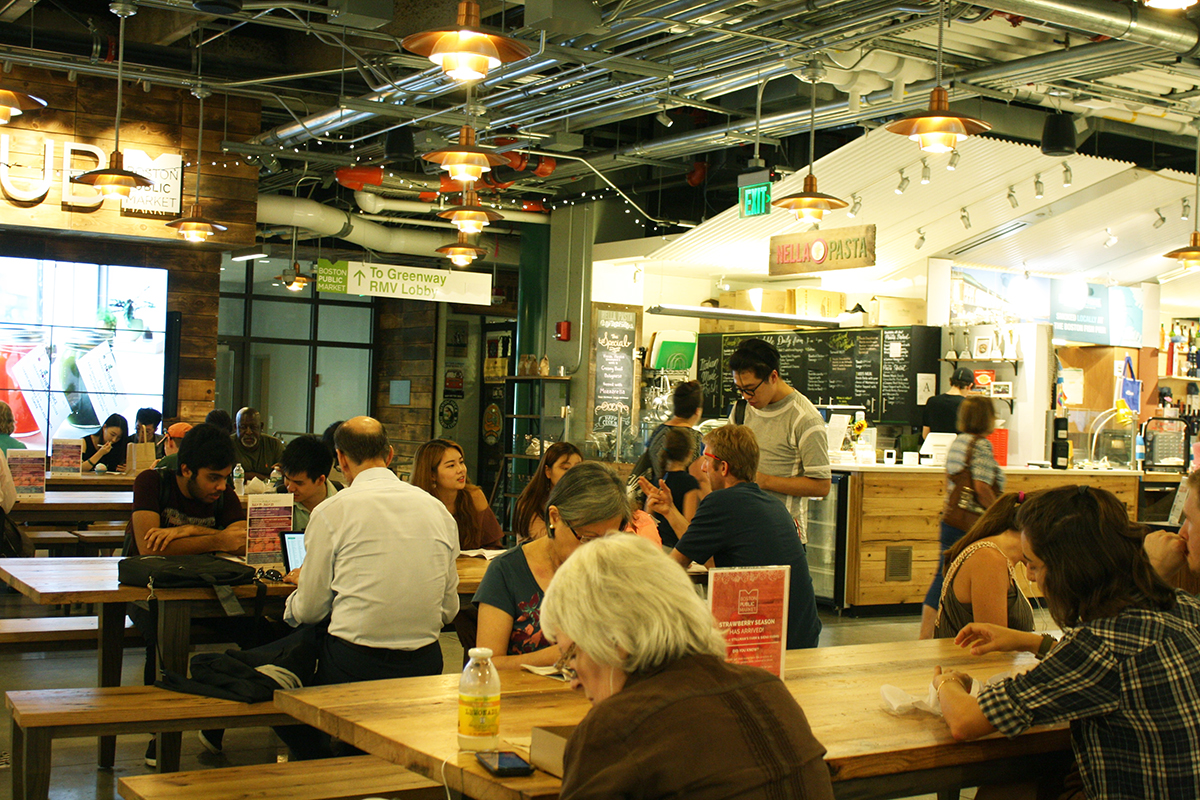 It’s not all commuters who stop in at the market—tourists, locals who said they were “treating themselves,” and food-curious students describe most of the people I spoke with over my time at 100 Hanover Street.

It’s worth chatting with the vendors and those managing their stalls, like Evan Reseska, 24, the second generation of Boston Honey Company. His family business began on a whim, and it now has a few thousand bee colonies all over eastern Mass., and an educational gift shop at the BPM with a viewing hive in the heart of Boston.

Then there’s Haily Tran, who’s leading a cheese sampling at Appleton Farms. She’s a volunteer with the Trustees, a nonprofit conservation organization that oversees nearly 25,000 acres throughout Massachusetts, including the circa 1636 Ipswich dairy Appleton Farms and its market stall.

The booth carries the most variety of Massachusetts cheeses anywhere. Tran, a cheese lover who begins an international development masters degree at MIT this fall, is passionate about her four hours per week volunteering there.

“I get to decide what we put out, [so, like today, I can] show people [that] cow cheese can be more versatile than your common hard cheeses, like gouda and cheddar,” Tran explains, handing me two wooden spoonfuls of soft cheeses. One is buttery and creamy, and the other is tangy from the use of raw milk—it pairs well with a honey roasted bite of Q’s Nuts from across the aisle, she tells me. 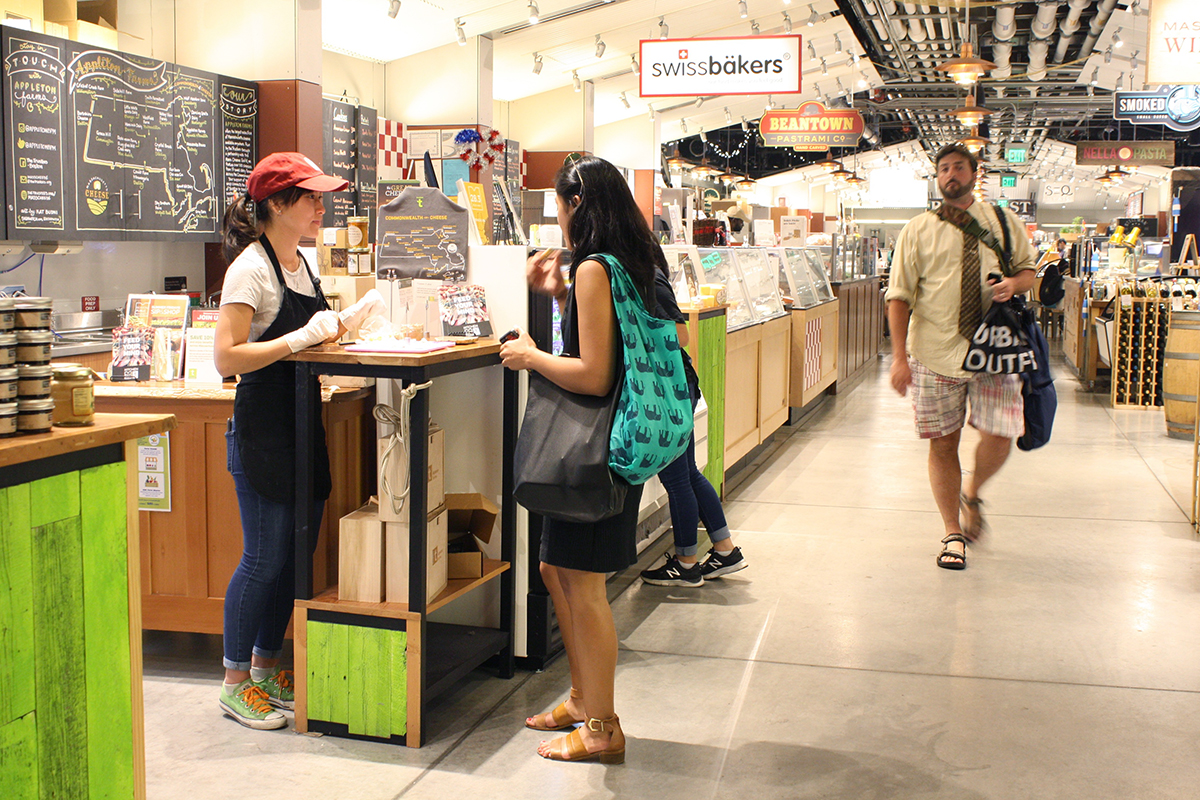 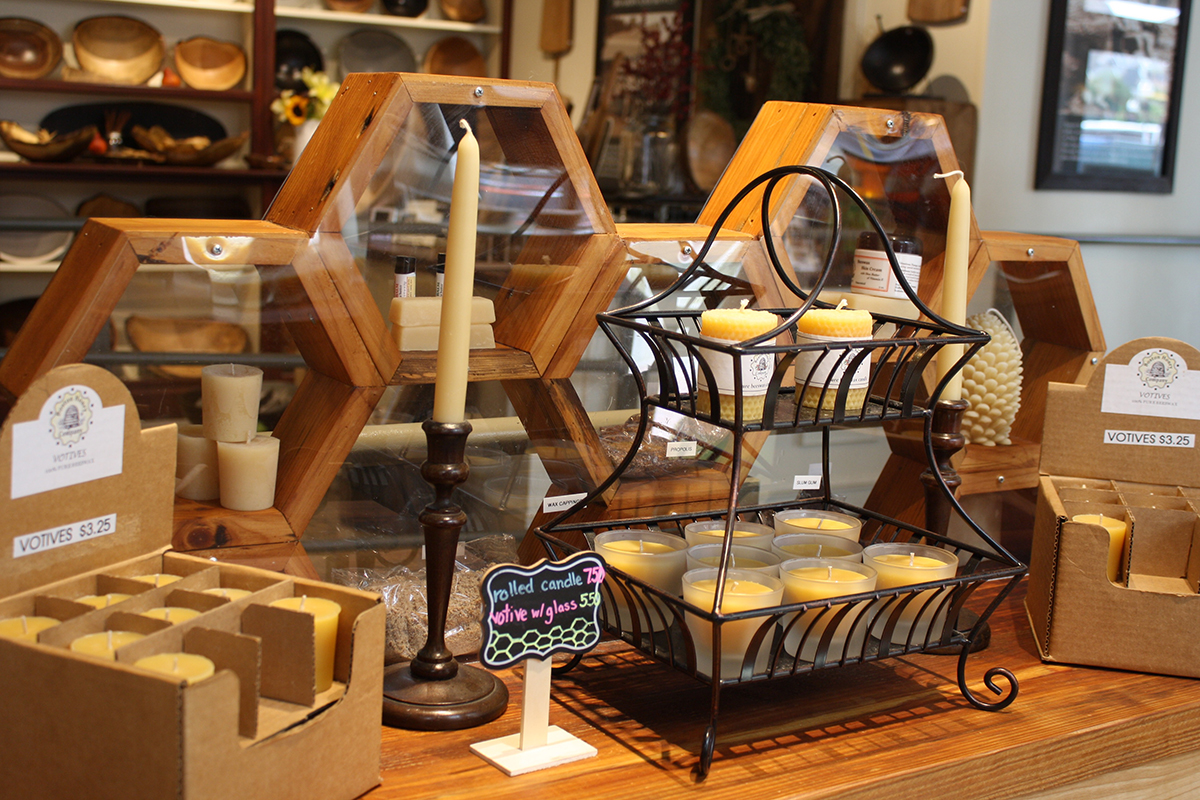 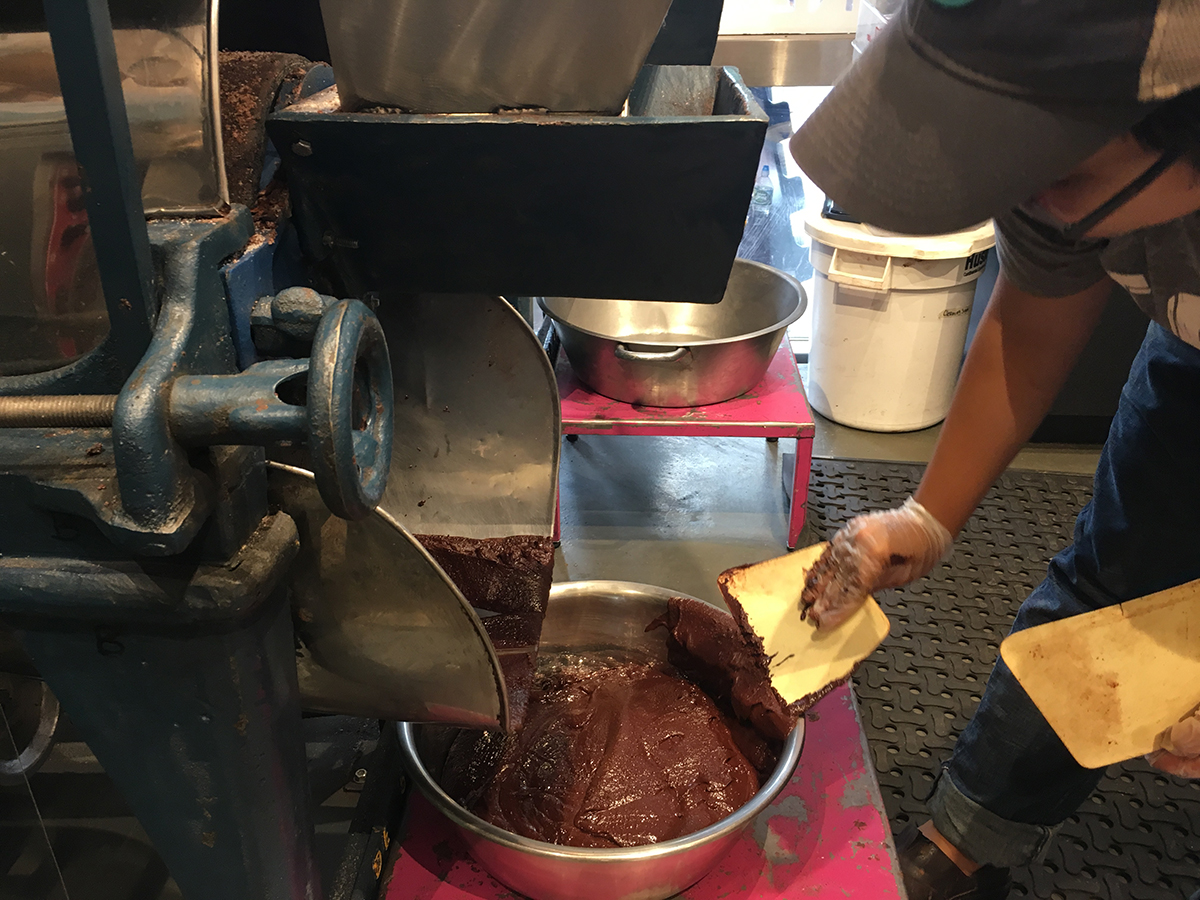 Taza Chocolate might be your next best bet to get a sample. Listen for a loud grinding noise, followed by the scent of dark chocolate floating through the air—manager Christine Vistro is milling a 28-pound batch of cacao beans on the booth’s handmade molinos (traditional Mexican stone mills). Because the Boston stall sells Taza’s unique chocolate beverages, Vistro grinds the whole bean, husk and all. She moves the 100 percent dark chocolate paste to a second molino, where she processes it again with sugar to produce a 40 percent chocolate for the bar’s drinks.

If you happen to be passing by Taza while Vistro is doing this, which happens about every other day as needed, stick around for a taste of the 40 percent chocolate.

Meanwhile, Levend has been lacquering bagels and building sandwiches all morning. Most everyone skimming their screens or a copy of the Globe at the communal farmhouse tables in the middle of the market has a bagel, an iced coffee, or both.

By this time, Beantown Pastrami’s John Girard has already sliced the brined, smoked, and steamed beef briskets for the day’s sandwiches. Inna Khitrik and her son, Alex, owners of Inna’s Kitchen, are unloading a cart of bulk containers of falafel, quinoa tabbouleh, zhoug (hot sauce), and ready-to-heat knishes, made at Commonwealth Kitchen in Dorchester, for the BPM’s busiest weekday hour (between noon and 1 p.m.).

In the afternoon, the lobsters populating the tank outside Red’s Best have awoken for a more dormant state. I spend a fair amount of time watching them climb over each other, marveling at how active (and fresh) they are. Later, a delivery from Stow Greenhouses makes that central stall, spanning the Hanover-parallel hallway on the way to the restrooms, even brighter with lilies and sunflowers.

“It’s almost like different layers,” Cronin says. “There’s the day-to-day layer, but every week, every month, brings something new.” 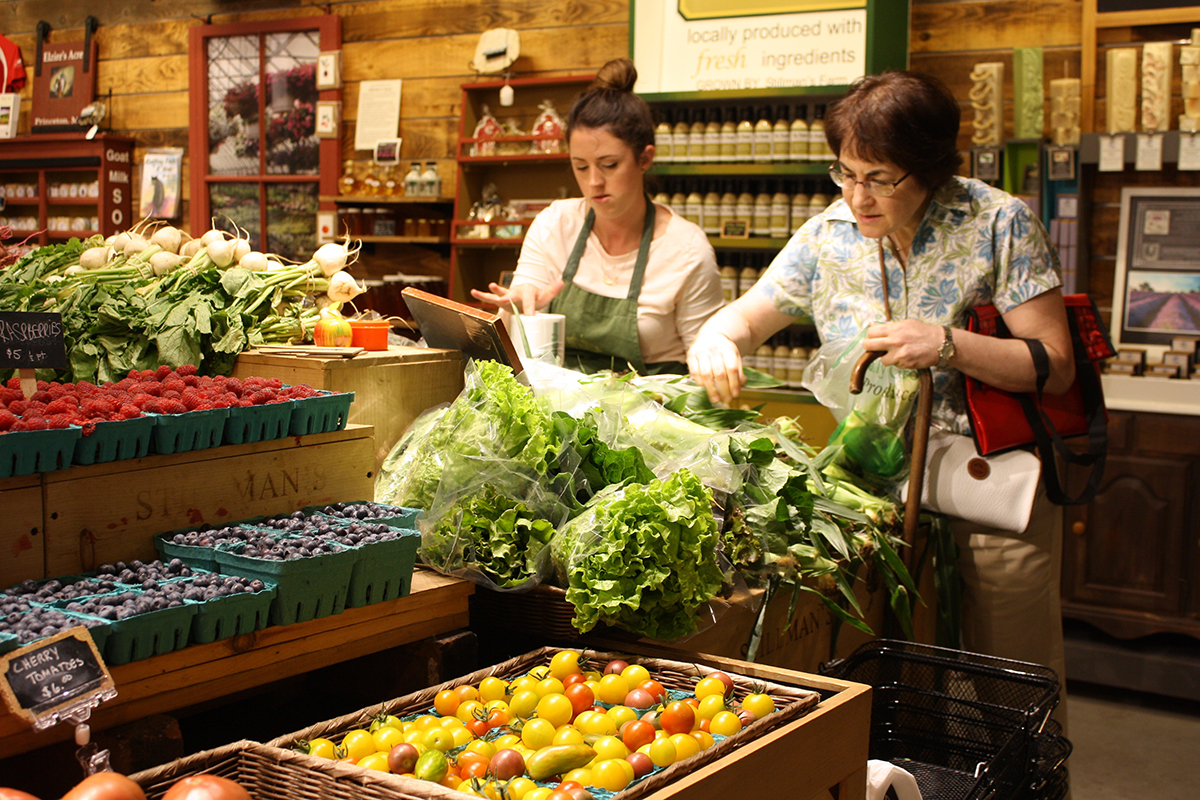 Shopping for corn at Stillman’s Farm at the Boston Public Market. / Photo by Jacqueline Cain 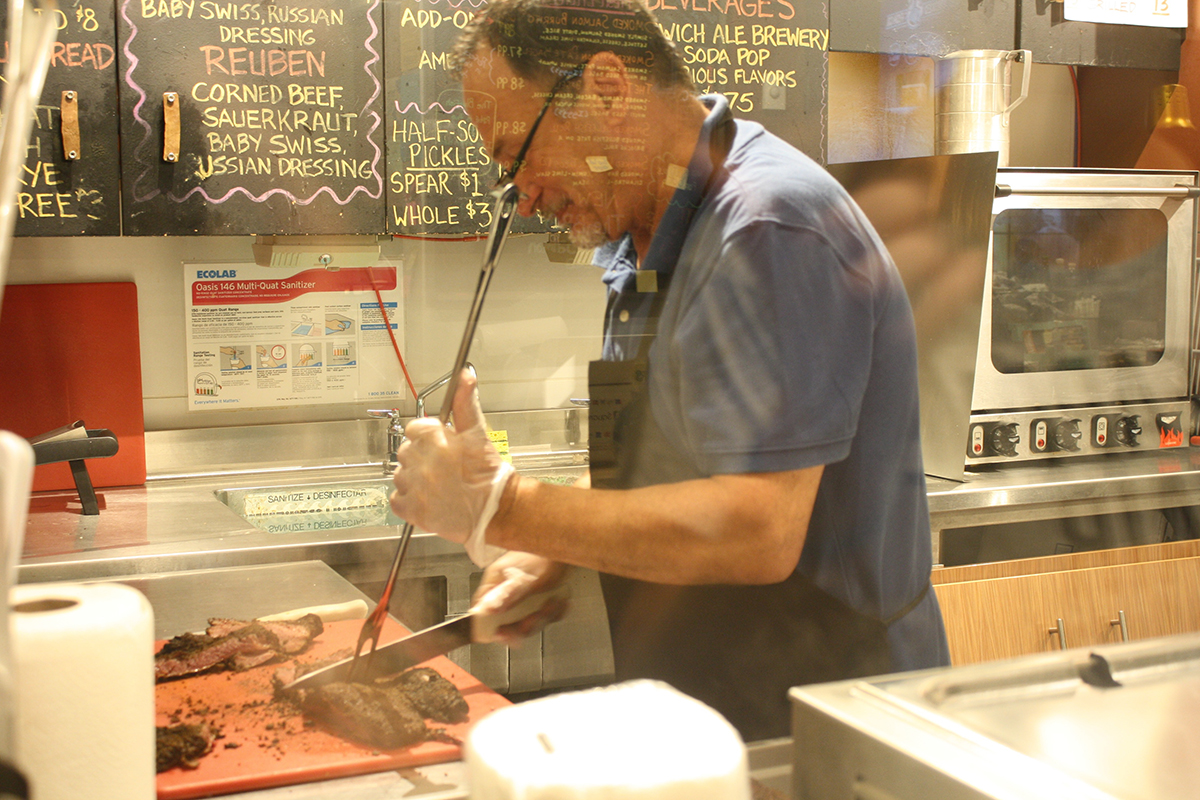 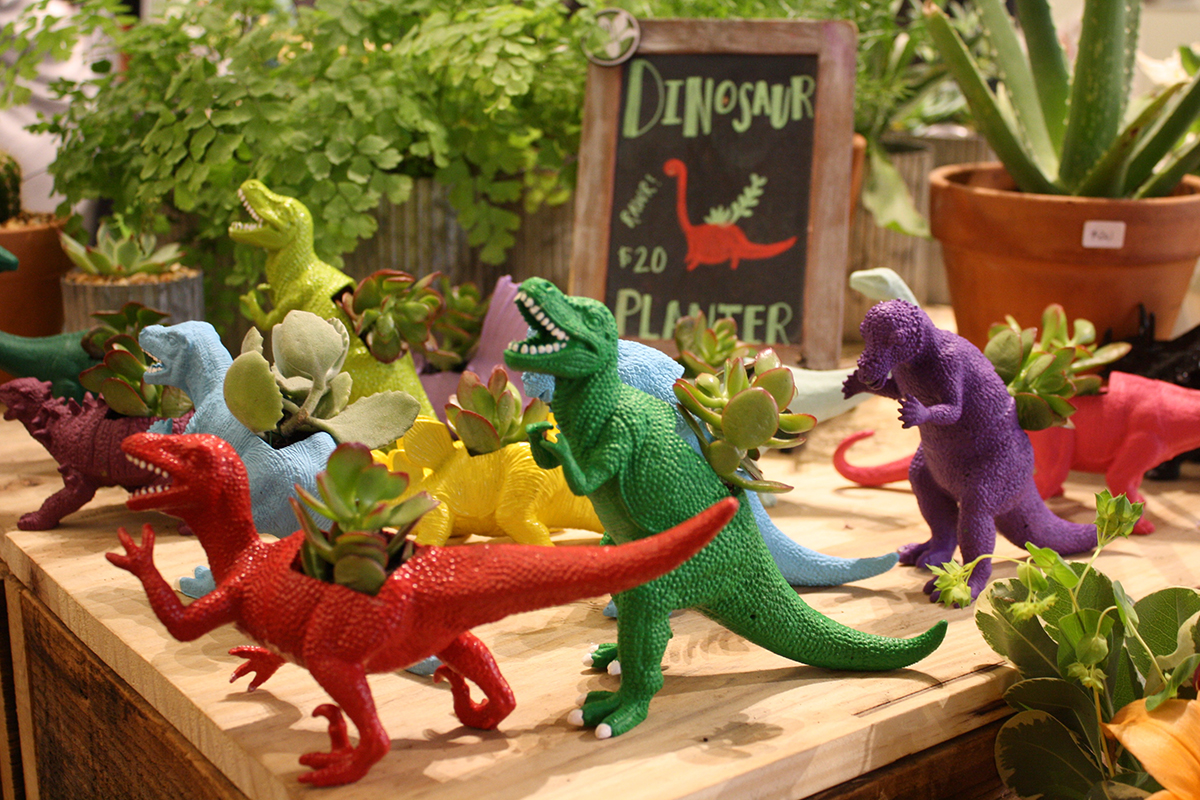