Prairie Fire Is Now Open in the Former Lineage Space 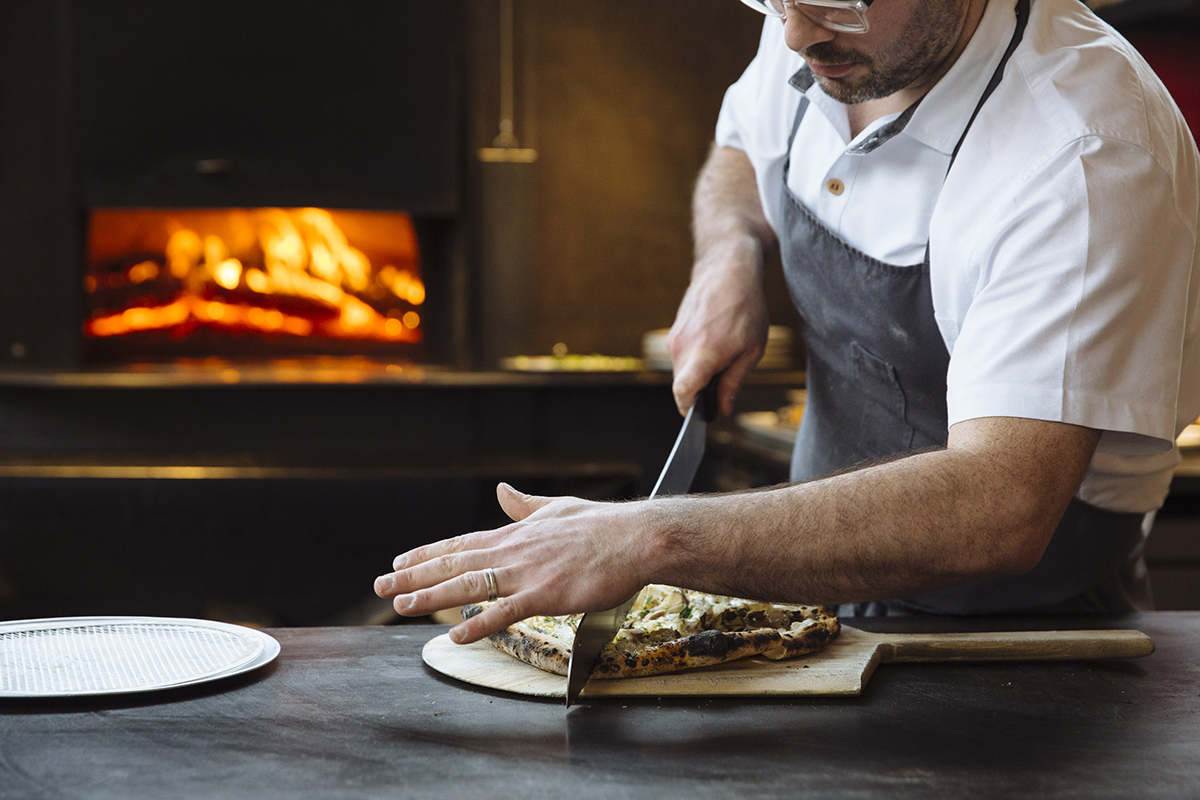 Thousands of new college students weren’t the only ones who moved into Brookline on September 1. A new restaurant from the team behind Milton’s Steel & Rye did, too. Prairie Fire is now open in Coolidge Corner, in the Harvard Street space that was formerly home to Lineage.

First reported back in March, Prairie Fire is a little sibling spot to Steel & Rye, which debuted to much acclaim in 2012, from partners Dan Kerrigan, Bill Scannell, and chef Brendan Joy. Like at Steel & Rye, Joy (Bondir, Clio, Sportello) sources fresh, seasonal vegetables and heritage grains for his dishes. Check out the opening menu online. It will change frequently with the seasons, and Kerrigan says to expect to see it grow a bit—he wants to add sandwiches—as the team gets comfortable.

The menu is centered on wood-fired pizzas and house-made pastas (full or half-size servings) and things that pair with those mains. That includes fire-roasted vegetables and New England oysters finished in the wood-fired oven, but it also means some raw seafood and a selection of salads, and lighter takes on bar bites, like chicken and pork meatballs. Cassidy Salus, Joy’s wife and a fixture in the kitchen at Steel & Rye, is an instrumental part of the second kitchen, too, Kerrigan says. She’s spearheading the production of pizza and pasta doughs, desserts, and house-made breads.

A wood-fired oven, custom-modified by craftsman Jason Hoynash of Blue Barn, Inc., is a focal point behind Prairie Fire’s bar, as it is in Milton. But overall, the restaurants don’t necessarily look like siblings.

“The aesthetic [of Steel & Rye] is very much a reaction to its building and space, which is quite unique,” Kerrigan says—it’s a former ambulance garage. They took the same approach at Prairie Fire, which is small, but linear.

When you walk in, a long, 25-seat bar spans the room, with two drink-making stations and two cooking stations behind it. An enclosed kitchen at the back of the room is mainly used for pasta production. Butcher block is in use throughout the restaurant, for its practical use rolling out doughs and cutting pasta, and also to recall that aesthetically.

Ted Gallagher, general manager at Steel & Rye, developed the beverage program at Prairie Fire. While it has a full liquor license and a cocktail menu, the focus there is a well-balanced selection of beers on draft—a dozen local brews and imports, from Night Shift, Evil Twin, Shacksbury, Blackberry Farm, and more to start—plus about a dozen each of white and red wines by the glass.

“We’re certainly carrying through the same level of [drink-making] knowledge and ability from our program at Steel & Rye, but we’re looking to feature a lot of beer and a lot of wine, a nice blend of things we think work well with the food,” Kerrigan says.

Prairie Fire’s door was quietly unlocked on Friday evening, with just an announcement on its Instagram account. Boston Restaurant Talked picked it up over the weekend. Prairie Fire is open nightly at 4:30 p.m. for now, though lunch service will come down the line.

“What I’d really like to see is the restaurant develop as an asset for the community in the sense that it’s a place for thoughtful, well-prepared, but simple food, any time of the day,” Kerrigan says.

For that reason as well, the small spot is not taking reservations, and it doesn’t plan to, he adds. The full menu is available until 10 p.m., at tables and at the bar, with pizzas extending to 11 p.m. on weeknights and midnight on the weekends.