A guide to what to eat when it opens this month in Somerville. 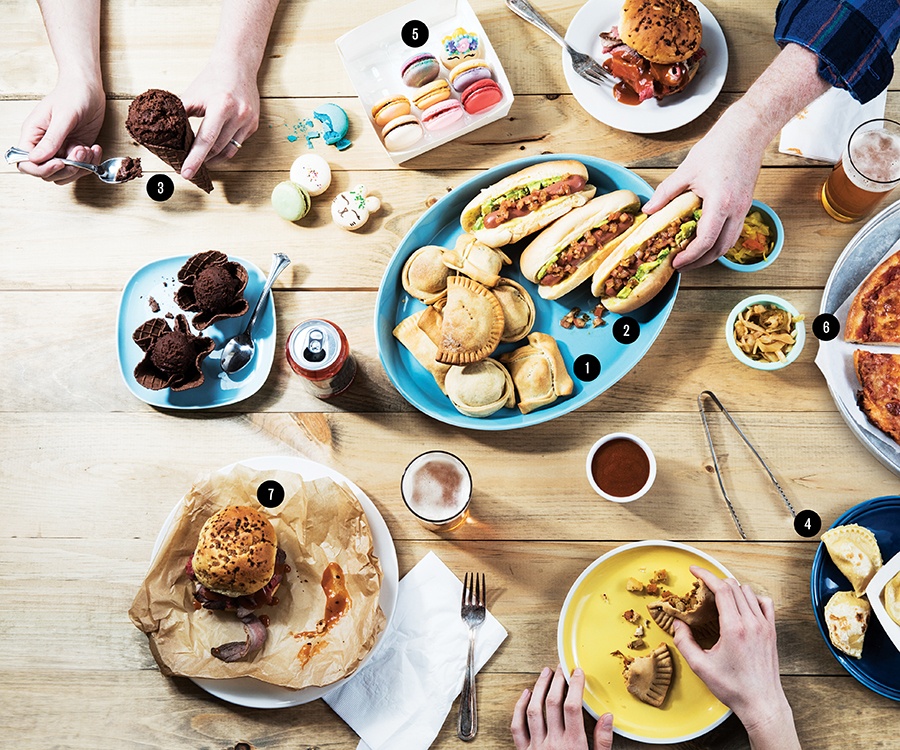 Set to open this month in Somerville’s Union Square, Bow Market will house indie retailers, artists, and 14 food and drink vendors, many of whom are setting up permanent storefronts for the first time after finding success as pop-ups and selling at farmers’ markets. Here’s a taste of five purveyors to whet your appetite.

When they met years ago in Miami, Melissa Stefanini and Sebastian Galvez bonded over the food traditions of their South American roots, particularly empanadas. The couple eventually ended up in Boston, where they’ve gained a following for their takes on the stuffed pastries, including a ratatouille version (1). Also look to the duo for completos, Chilean-style hot dogs (2) with toppings such as avocado and crushed potato chips.

Leave it to someone with a background in physics and pastry to come up with the ultimate ice cream alternative: cocoa cones filled with fluffy dark-chocolate mousse (3) infused with natural flavors such as blackberry rose and sour cherry. Alexandra Whisnant, an alum of Le Cordon Bleu in Paris who studied science at Duke, will be scooping the airy dessert, made with Valrhona and TCHO chocolates, as well as selling her signature bonbons.

Vanessa and Casey White got their start in pierogi-making as middle schoolers helping out at their grandfather’s Eastern European market in western Massachusetts. Now the sisters behind Jaju—which takes its name from the Polish word for grandfather—use his dough recipe for their more-modern spin on the plump dumplings (4). You’ll find varieties ranging from classic potato and cheese to Buffalo chicken, paired with complementary snacks such as kielbasa sliders.

Anyone who’s attempted to make traditional French macarons knows it’s not an easy art, or science, to master. Maca owner Tamy Chung infuses her perfect pâtisseries (5) with some whimsy, offering unconventional flavors such as Fruity Pebbles and character cookies (if you’ve never bitten into a unicorn macaron, you’re missing out). Chung expects to stock more than a dozen varieties, available packaged in pretty boxes or as individual pieces ready to be devoured on the spot.

For their new venture, Mike and Patty’s owners Mike Gurevich and Ania Zaroda are gifting Somerville with the South Shore’s and North Shore’s most quintessential foods: bar pizza (6) and roast beef sandwiches (7), respectively. The former will be crispy and cheese-laden (including a vegan version), while the latter will aim for the ultimate squishy combination of bread, beef, and barbecue sauce. “Our tasting research has been substantial,” says Gurevich, who grew up in Salem and Lynn.