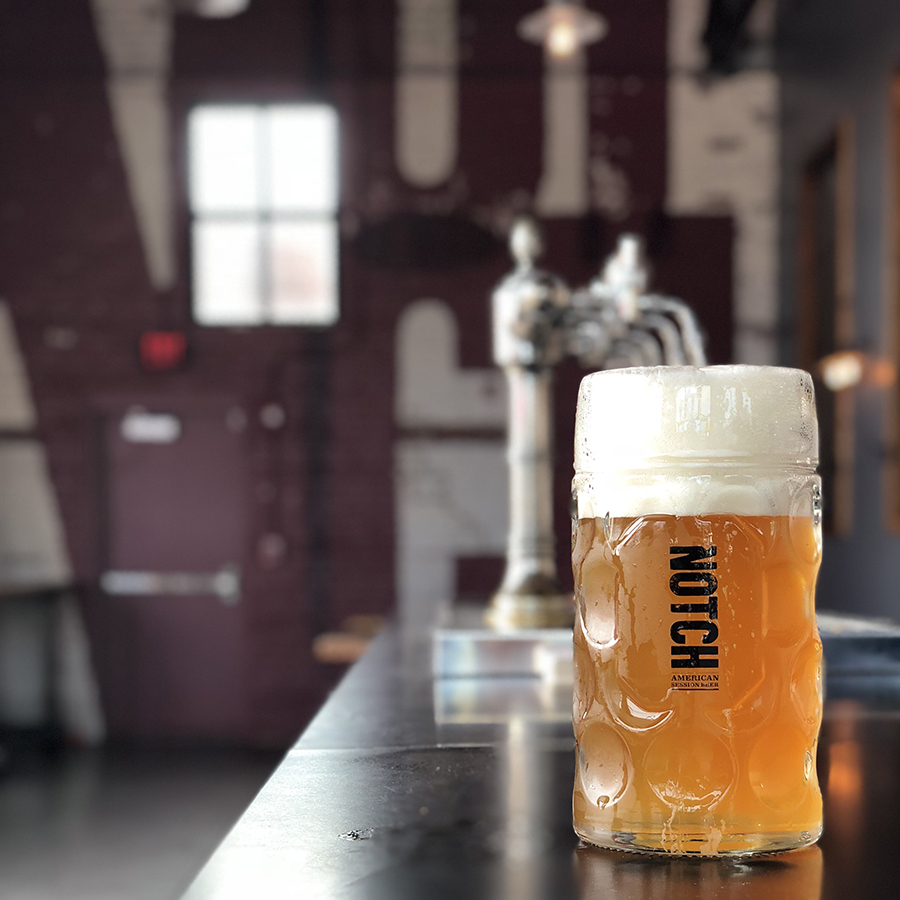 A liter of Voll Projekt Festbier on the bar at the Notch taproom in Salem. / Photo provided

Planning to notch a few pints this Oktoberfest season? You could head to Salem, where Notch Brewing is finally flexing its skills with full-strength beer: a side project called Voll Projekt officially launches this weekend with a 5.8-percent Oktoberfest-style lager called Festbier.

Save for a couple taproom-only beer releases, the Salem-based Notch hasn’t produced anything higher than 4.5 percent alcohol-by-volume. Inspired by the standard, lower-alcohol brews in German, Czech, British, and other European beer cultures, American “session” beer is the niche head brewer and cofounder Chris Lohring carved into the market back in 2010 when he launched his brand of full-flavored, low-proof lagers and ales; the company is, in fact, named for the nick made to keep a record when you’re having more than one.

Voll Projekt ups the alcohol ante, without making too strong a departure.

“You look at the way the Germans, and even the Czechs categorize their beer, and it’s typically ‘lower [strength],’ ‘full,’ and ‘strong.’ In the U.S., for some reason, it’s either ‘weak’ or ‘strong.’ But there’s this whole category in the range of 5-6 percent alcohol, which is most of the beer consumed in the world. Those are the styles we haven’t done,” Lohring explains.

Last year, as he and brewer Brienne Allan got more familiar with Notch’s custom-built brewhouse in Salem, they started experimenting with full-strength beer, or vollbier as the Germans call it. Loggerhead, a 7.5-percent German bock, was a well-received taproom exclusive this past spring.

“But I was uncomfortable putting those out under the Notch name,” Lohring says. “If people go out and drink Notch right now, they know they won’t get in trouble as quick. If we start putting out beers above 4.5 percent under the Notch brand, we’re breaking a promise.”

The Voll Projekt brand is about maintaining that sense of responsibility more than it is about market repositioning, Lohring adds—so don’t hold your breath for boozy, dank, and hazy New England-style IPAs just yet.

“We’re not doing this so we can jump on the bandwagon,” Lohring says. He’s quick to add that he loves a well-made New England IPA, and points out that Notch already produces those hoppy styles with Dog & Pony Show pale ale, and Raw Power session IPA.

But with Voll Projekt, Lohring gets to take full advantage of the brewhouse, which was designed to triple-decoct, open-ferment, and naturally carbonate lagers—Czech-style processes meant to produce full-flavored session beers. “But they make good full-strength beers, too,” Lohring says.

And he’s hopeful the departure from session beers will, in turn, make Notch standards even better across the board. “When you brew outside of what your range is, you’ll learn. We’ve done all this work to make our session beers the best they can be, and I think we can take that to different strength levels and have that be successful.”

The Voll Projekt debut, Festbier, gets tapped this Sunday, Sept. 23, during Notch’s second annual Oktoberfest party with Karl’s Sausage Kitchen, and it should stick around for a week, Lohring estimates.

The production staff already has a 12-month lineup of future full-strength beers planned out, from a simple ~5-percent Dortmunder, to dark Czech-style lagers. Notch has taken over additional space in its Salem industrial lot and is currently building out a larger production and packaging area. Lohring says beer lovers can expect to see more variety, from Notch and the Voll Projekt, start to hit the market as early as November. Stay in the loop about future full-strength releases by following Voll Projekt on Facebook.