Love Art Poke will open this summer in the Financial District, and "an express location" is also headed for the West End. 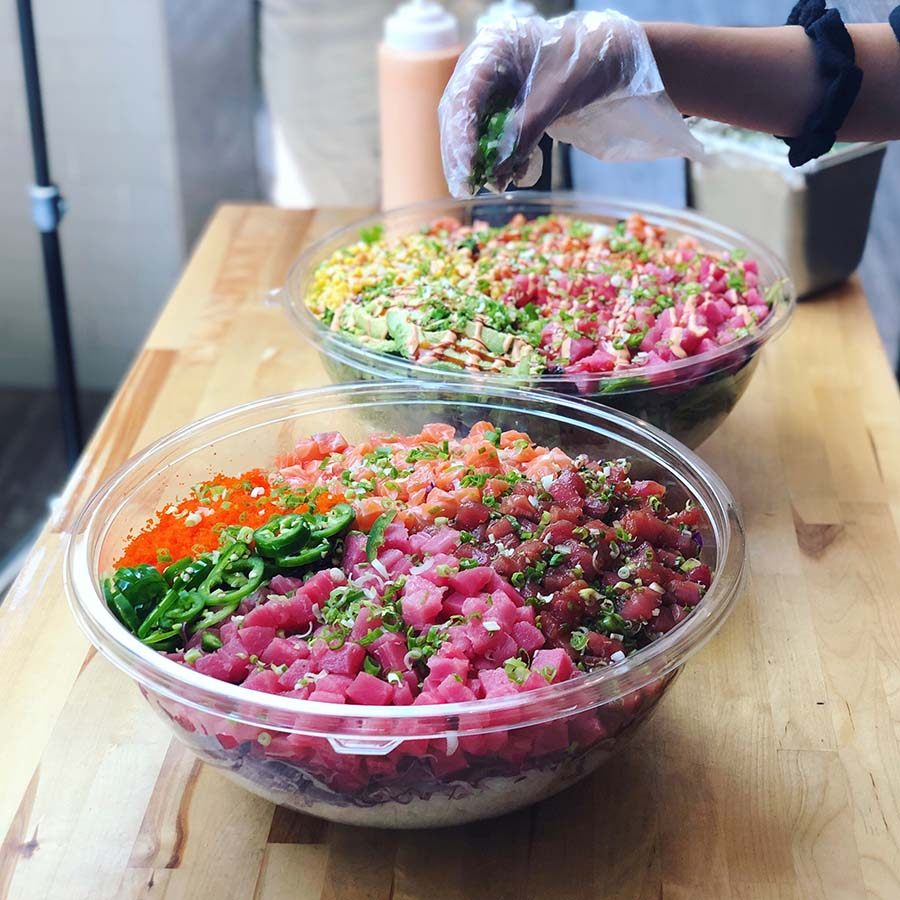 A group of fast-casual, Pacific-inspired restaurants is spreading the love into downtown Boston. Love Art Sushi, a Berklee-area spot for sushi burritos and more, is getting two new, poke-focused sister spots this year: Love Art Poke, coming soon to Congress Square in the Financial District; and Poke by Love Art, opening later this year at the Beverly building, near North Station.

The latest from Momo No Yume, Inc. partners Ronald Liu and Jessica Chiep, Love Art Poke and Poke by Love Art will join the original Boston sushi spot, as well as a noodle shop called Love Art Udon, which landed near Boston University in 2018. Momo No Yume also just launched a “ghost” restaurant called Nani Chick’n Bunz, Eater Boston reports, which delivers a variety of fried chicken sandwiches via Uber Eats, and is also getting in on the pop-up scene.

Both of the forthcoming brick-and-mortar menus focus on poke—raw, marinated seafood and/or vegetable salads. Served over rice or greens, poke is a traditional snack in Hawaii, and a hot (but chilled) trend in fast-casual dining around the country.

Love Art Poke will serve up such items like the Spicy Hawaiian poke bowl, topped with shoyu-marinated tuna and mixed-in veggies; the Hilo Tako, featuring seared octopus marinated in a light citrus dressing with crunchy radish; and vegan options, like a wakame seaweed salad, and Hawaiian inari (seasoned fried tofu). Poke by Love Art will be “an express location” with a smaller menu of similar dishes.

“We’ll be working with speciality ingredients like octopus and [six to eight] different species of seaweed to create a more diverse, chef-driven concept that is still quick and easy to access in a fast-casual format,” Liu says.

The Love Art brand is also growing its catering business; while it’s currently run out of the Fenway-area sushi spot, the catering kitchen will move to Congress Square by early fall, Liu says.

Love Art Poke is headed for 40 Water Street, part of the city block-sized Congress Square development from the firm Related Beal. Incorporating five historic buildings at the site of the former Fidelity Investments headquarters, the project aims to connect Government Center, Faneuil Hall, Post Office Square, and Downtown Crossing. Congress Square will have 43,000-square feet of new retail as a “pedestrian-oriented food and beverage destination,” plus office space up above.

The Beverly outpost is also a Related Beal project. Poke by Love Art is the final storefront to get filled in the workforce-housing building, which is also home to A&B Burgers, a location of Central Rock Gym, and a 220-room Courtyard by Marriott hotel.

“We recognize the demand for fast and healthy food options in the city,” Liu said in a press release. “The Beverly and Congress Square are situated in two prime locations that attract a multitude of people walking through the area every day, and we look forward to becoming a part of the community.”

Both Love Art Poke and Poke by Love Art are on track for late summer/early fall openings, Liu says. Stay tuned on Instagram to follow along with the progress.