Go inside Geppetto, a Long-Awaited Italian Restaurant Opening In Cambridge This Weekend

Stocked with inspired pastas and an awesome amaro cart, it's the capstone to a three-part project from noted chef Will Gilson. 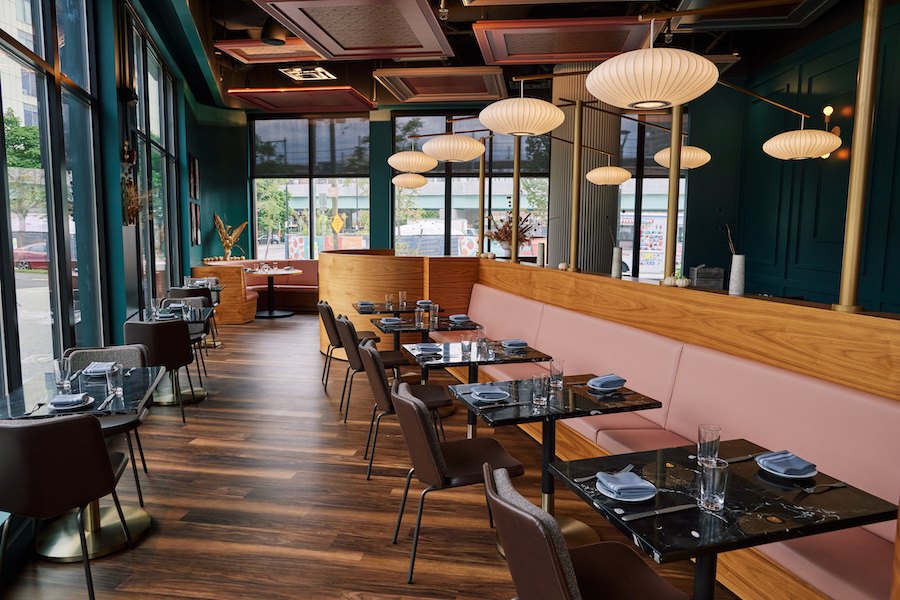 Most chefs will tell you that trying to open a restaurant in the middle of an unpredictable pandemic—one that constantly upends construction schedules, hiring processes, supply chains, and countless other details—is like trying to cross a highway while dodging 18-wheelers.

For chef Will Gilson, this metaphor is perhaps a bit on the nose.

“I was walking down the street in Chicago, and I almost got hit by a truck,” says Gilson, whose Cambridge restaurant Puritan & Co. has been a perennial favorite for modern New England cuisine since 2012. During his time in the Windy City, Gilson happened to be stewing on names for one of his next projects back here at home, an Italian restaurant. And after he collected himself from the traffic mishap, he managed to glimpse a word on the side of the truck as it went whizzing by: Geppetto’s.

Tomorrow, Saturday, Oct. 2, Gilson will finally open Geppetto in Cambridge Crossing, a new mixed-use development on the city’s east side. Its name, inspired (minus the possessive form) by that near-miss with disaster, is an apt one: After all, the chef always managed to identify moments of inspiration even as he bobbed and weaved his way through a treacherous environment for running restaurants, never mind launching them. 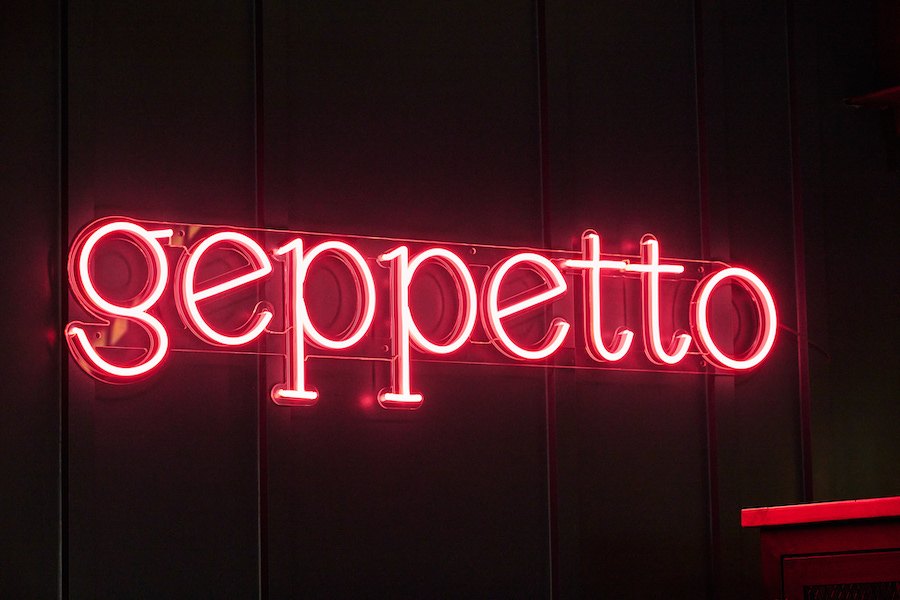 Somehow, though, he’s done it over and over again. Geppetto is actually the last of three restaurants that Gilson has opened at Cambridge Crossing since October 2020. First came Cafe Beatrice, an all-day spot named for his daughter. It was followed in November by the Lexington, a destination for New American cuisine, cocktails, and a hell of a roof deck. And then, during the subsequent winter months, Gilson kicked off a takeout- and delivery-only preview of Geppetto, serving Sicilian-style pizza, lasagna, and a few other hearty Italian comfort dishes that proved to be exceptionally popular while locals were huddled up inside. 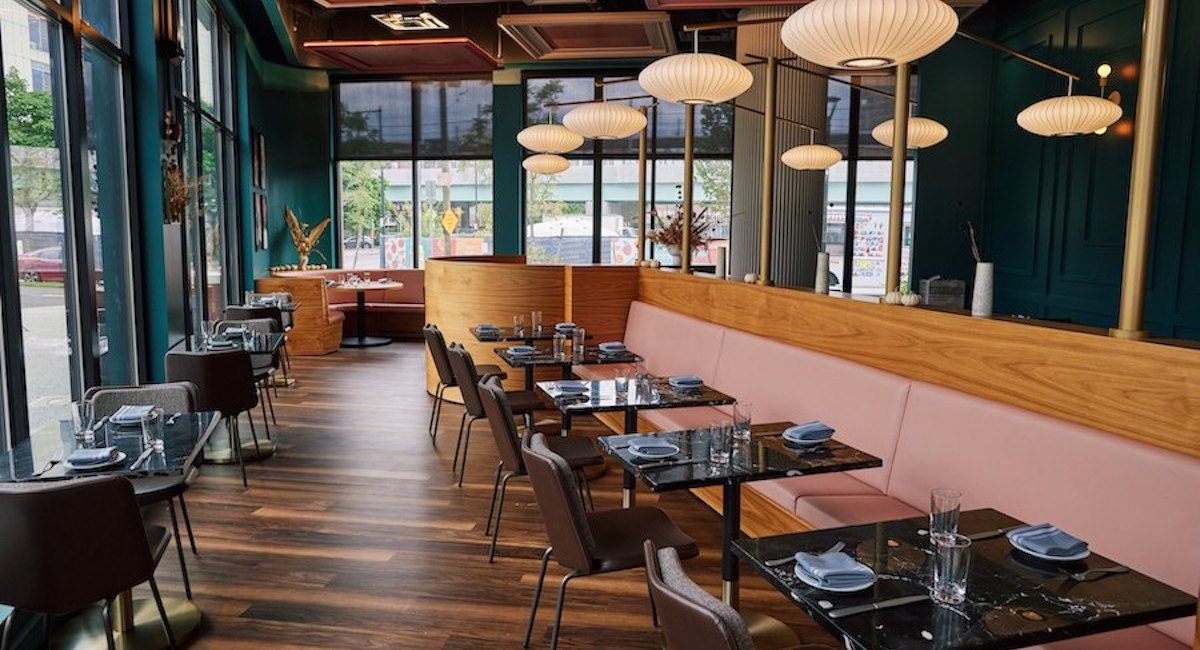 When the real thing opens this weekend, though, guests will find the chef’s fully realized vision for the place—and it is markedly different than what the standard takeout fare suggested. (Fear not, you can still find the pizza at Cafe Beatrice.) In its true form, Geppetto looks to elevated (but not fancy-pants) Italian cookery from across the Boot, and burnishes it with the farm-sourced New England ingredients and New American sensibility for which Gilson is known. 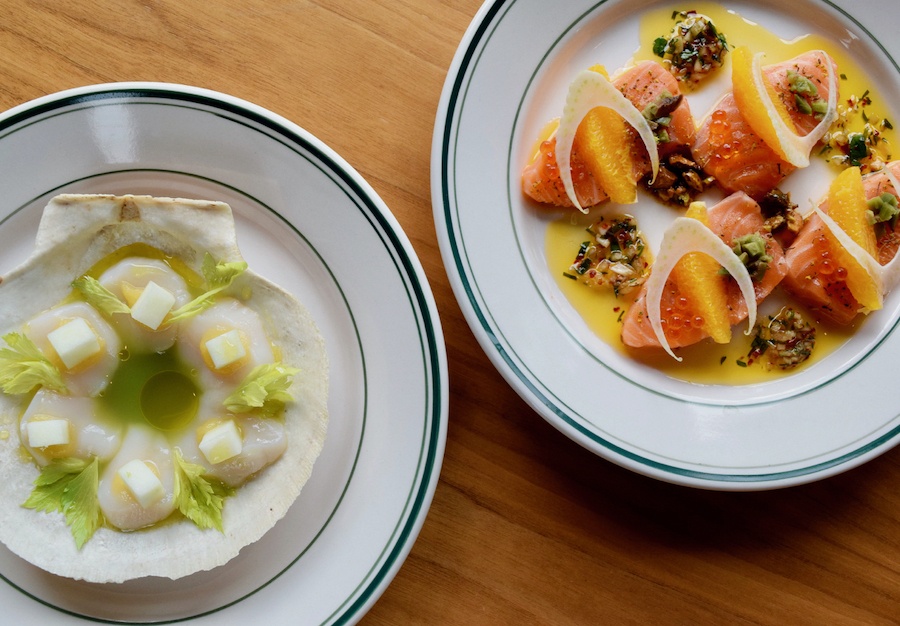 After all, he says, a lot of people are opening Italian restaurants lately. (He’s certainly not wrong.) To stand out, it makes sense to embrace an approach that’s already set him apart.

“The thing about running restaurants these days is that everybody can create their own version of something, and it’s up to the public to decide whether or not they like it,” Gilson says. “But as a chef you have to make sure that your unique stamp is on it. Otherwise, it just falls into the fray of manufactured restaurant concepts.” 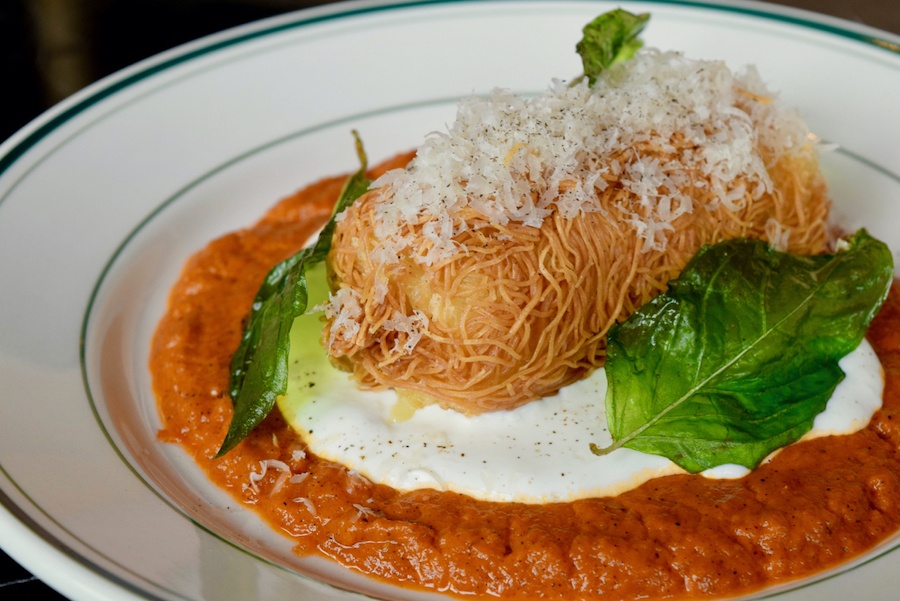 On the food front, Geppetto stands out with a curated menu that covers the Italian bases with nuance and a bit of playfulness. You’ll start with breads like black truffle and taleggio cornetto, as well as apps like kataif-encased fried mozzarella served with charred tomato and stracciatella; move on to crudos, such as salmon with orange, olive, and pistachio; and then dig into pastas, such as beet cavatelli with corned brisket and hen-of-the-woods mushrooms, and spinach tagliatelle with mussels, basil butter, confit garlic, and lemon.

The pastas are all made in-house by “pasta consigliere” chef Tony Susi, whose Sage restaurants were notable pioneers of contemporary Italian in Boston. A few shareable meals round out the menu, such as the charcoal-grilled swordfish with five-herb pesto, pumpkin, and celery root. 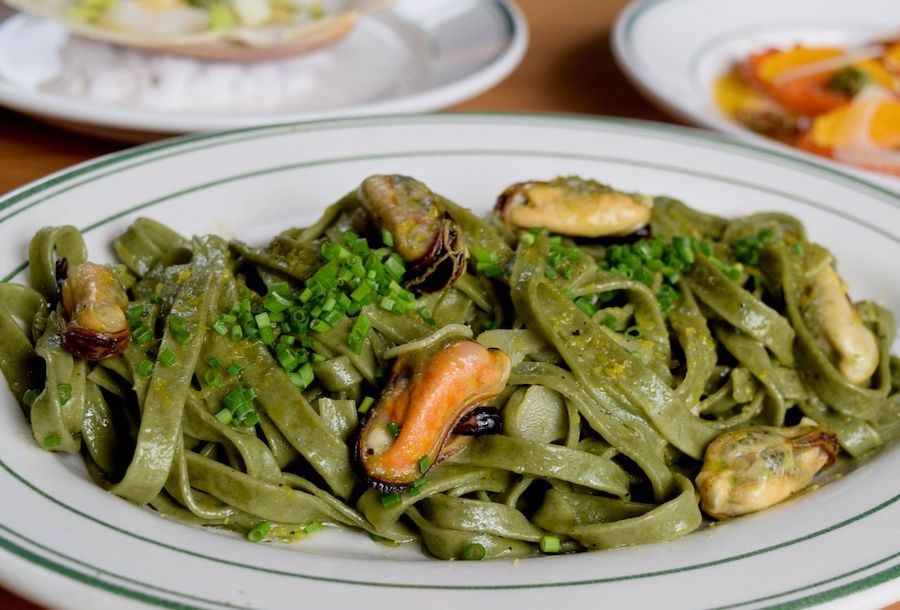 The space, meanwhile, is swathed in sophisticated tones of soft teal and blush, copper accents, and colorful pops of faux flower arrangements. After you’ve hunkered down in a plush banquette, you can start with a glass of wine or one of several cocktails on draft, including a Negroni of exclusively Italian spirits. Drink-wise, though, the highlight has got to be the amaro cart that roves the room dispensing digestifs—or, even better, pouring them over pastry chef Brian Mercury’s house made gelato for an affogato-inspired dessert. 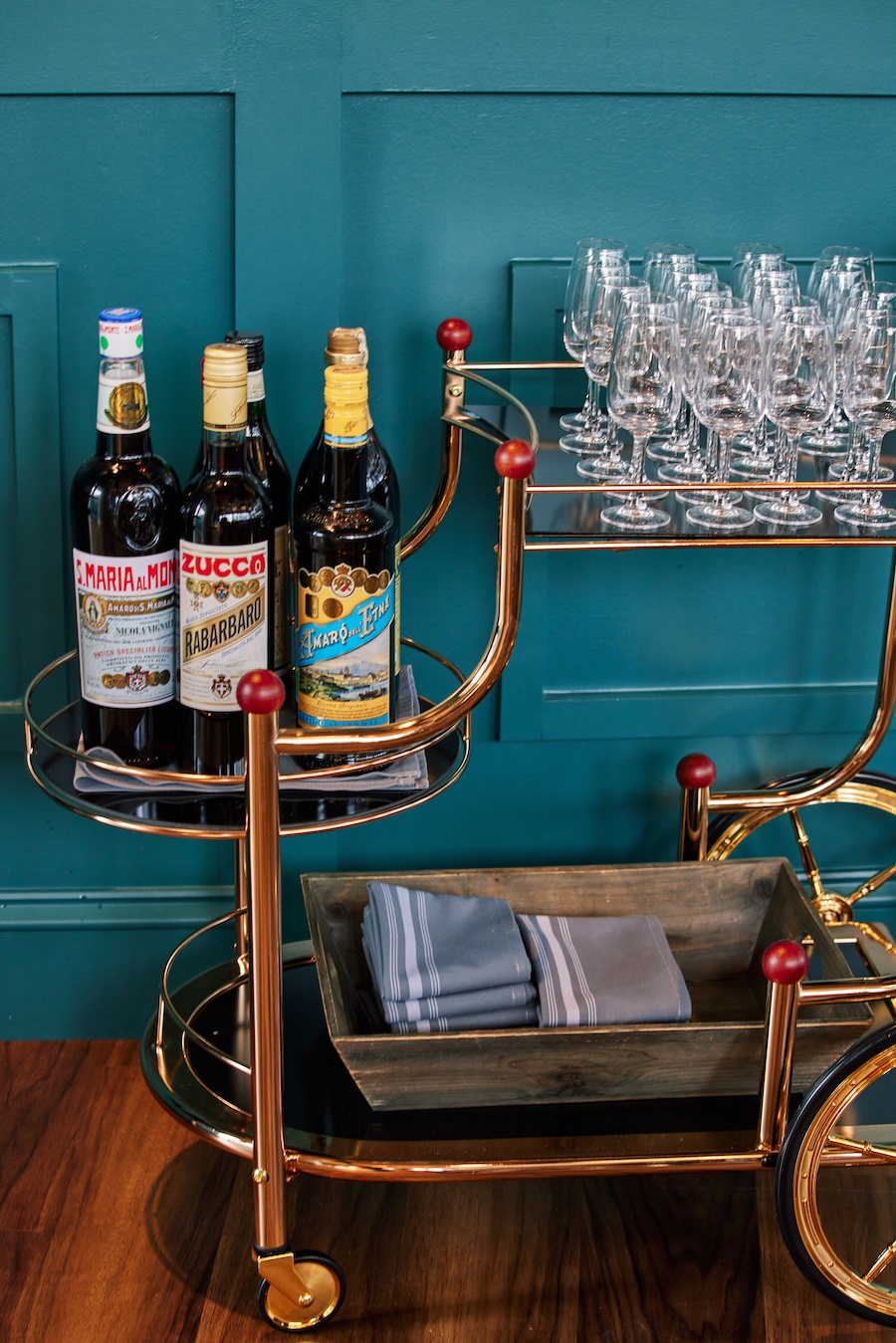 As the capstone to his multi-venue Cambridge project Geppetto itself is a sweet ending to what Gilson jokes is one of the longest launch periods the local restaurant industry has ever scene. That said, now that he’s made it through the travails of a pandemic-time opening, it’s also the start of a new beginning for Gilson and his guests and staff, who are finally getting back to the business of dining out. 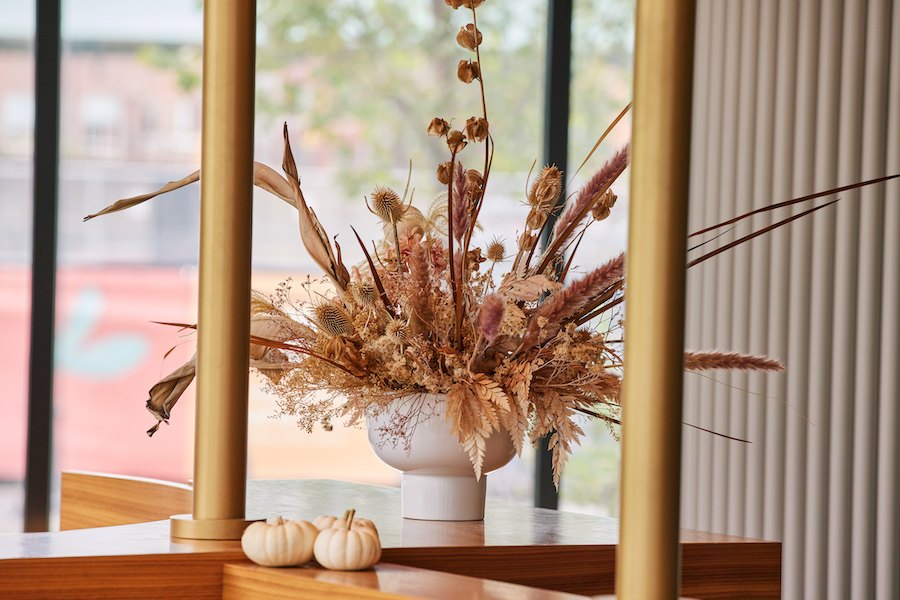 “The reality of the situation is, people love human connection,” Gilson says, reflecting on the trajectory of the restaurant world right now. “Over the last 18 months, I’ve heard more and more from people that they missed that. So here we are. Let’s see if we’re right.” 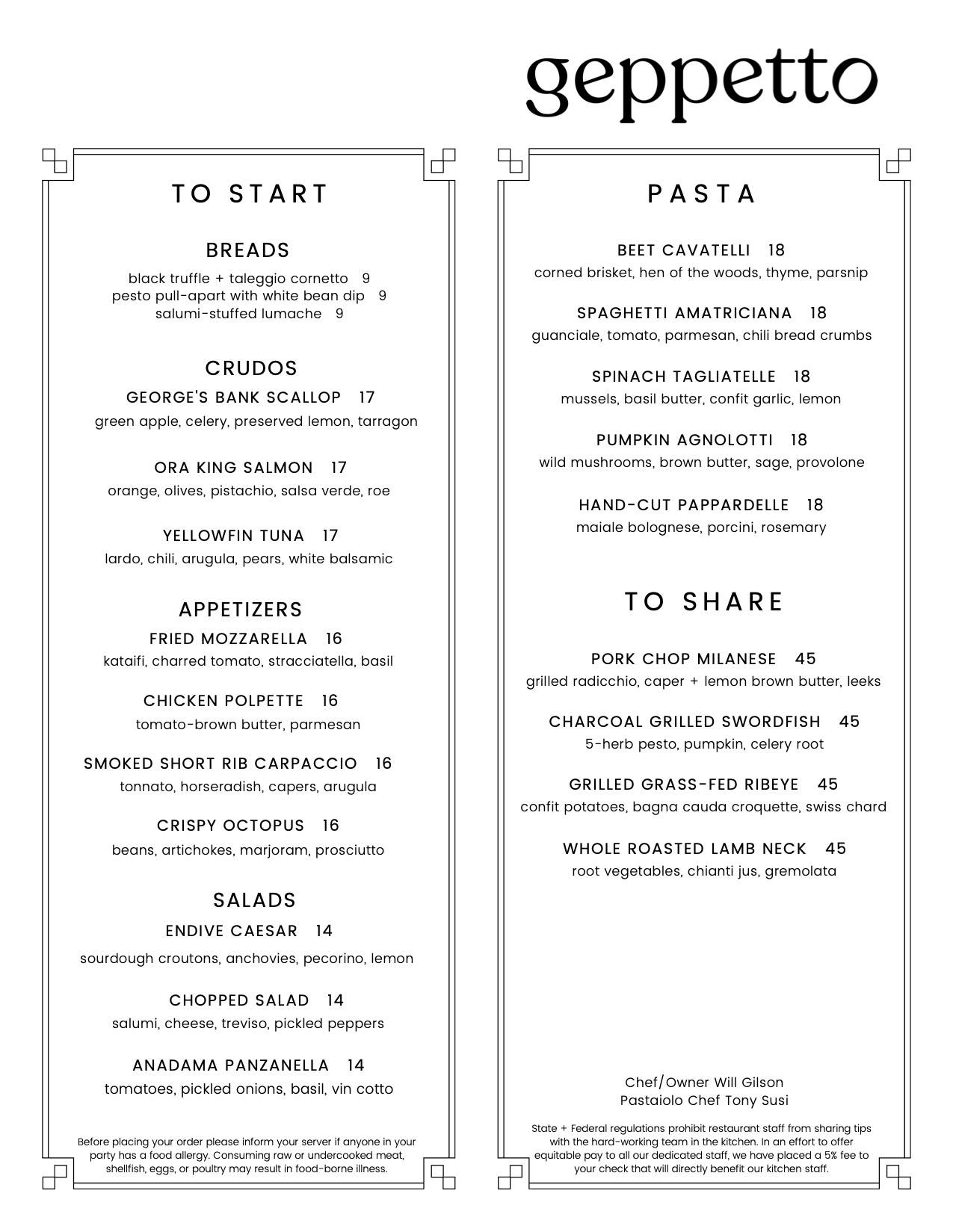