It’s been a very long break for the venue—and for Louis DiBiccari, the latest chef to helm its culinary residency program. 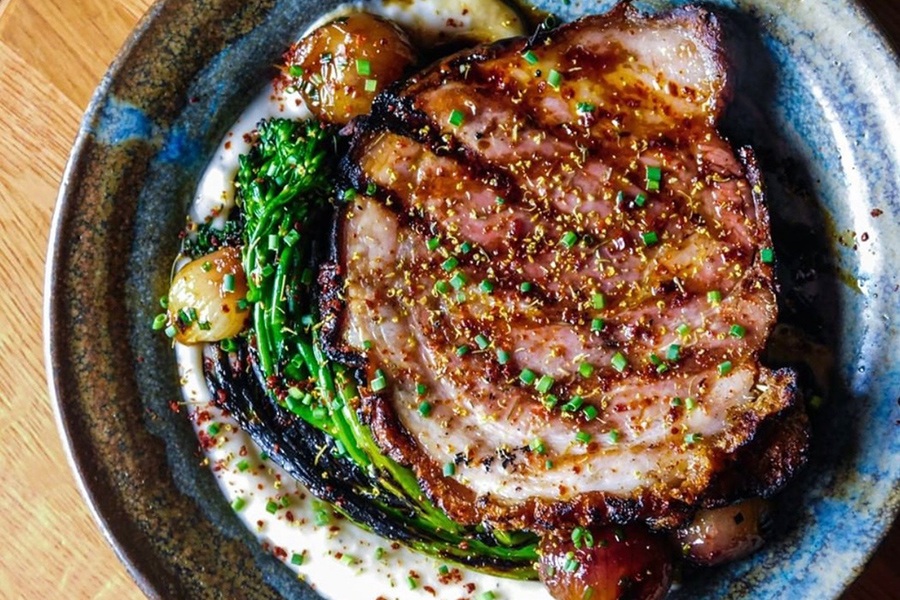 Call the comeback of Wink & Nod—the South End cocktail bar and culinary incubator that returned this week for the first time since March 2020—one heck of a pandemic pivot. It’s not just the reopening of the physical space that’s been a long time coming: Chef Louis DiBiccari, who is running the first culinary residency at Wink & Nod 2.0, is bouncing back after a five-year absence in the kitchen. His new project is SubRosa, inspired by Mediterranean and Middle Eastern cuisines.

Nodding to the obvious, Euz Azevedo—owner and president of Boston Nightlife Ventures, the group behind the handsome 159-seat spot and several others around the city—knew a basement-level speakeasy-inspired bar would’ve made lots of folks uneasy earlier in the pandemic. “We spent quite a lot of money investing in a sophisticated air filtration system, which is part of why we got delayed to reopen,” Azevedo says. “We’re very excited to be back to the neighborhood.” 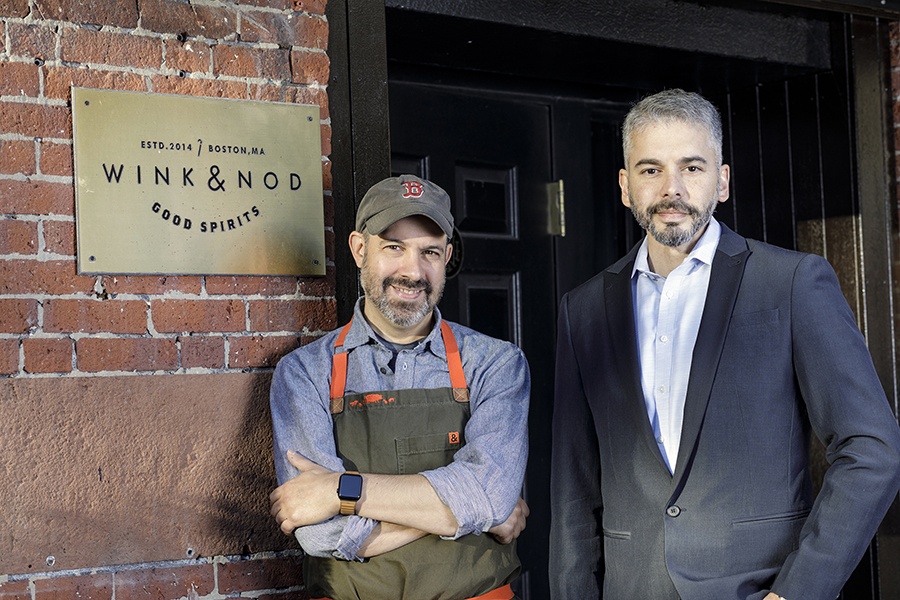 As for DiBiccari, SubRosa is a renaissance, which is perfect for a concept that is both an art gallery and a restaurant. It’s his first time running a full kitchen since closing his Fort Point restaurant, Tavern Road, in 2017, though he ran Somerville gallery and cocktail bar Create for a few years in between. “It’s been a long road back,” he says. “When you open your dream restaurant, which I thought Tavern Road was, and then you look at it closing, you say ‘Maybe I can’t do this. Maybe I need to do some soul-searching.’ And I did.”

The soul-searching meant moving to Nantucket for the summer of 2021 with his girlfriend Meredith Fitzgerald, who Angela and Seth Raynor tapped as the general manager and wine director for the final season of their famed restaurant, the Pearl. There, as DiBiccari puts it, he got lost in the woods every day, mulling his next step. He’d pick up goodies at the farmers’ market and mess around with recipes, finally deciding, “You need to just get back on that horse and ride some more.” In the time since Nantucket, he and Fitzgerald moved to Medford, where he kept tinkering with recipes, and quietly used friends as guinea pigs. Next thing he knew, he was halfway to a new menu.

“I liked the name SubRosa because it really speaks directly to that underground culture of cocktail bars and art galleries,” he says. The name means “under the rose” in Latin, which hints at hush-hush meetings in rose gardens and hidden rooms. “What’s down there?” he asks of those secret spaces. “Treasure? Dead bodies? I don’t know,” he adds with a laugh. 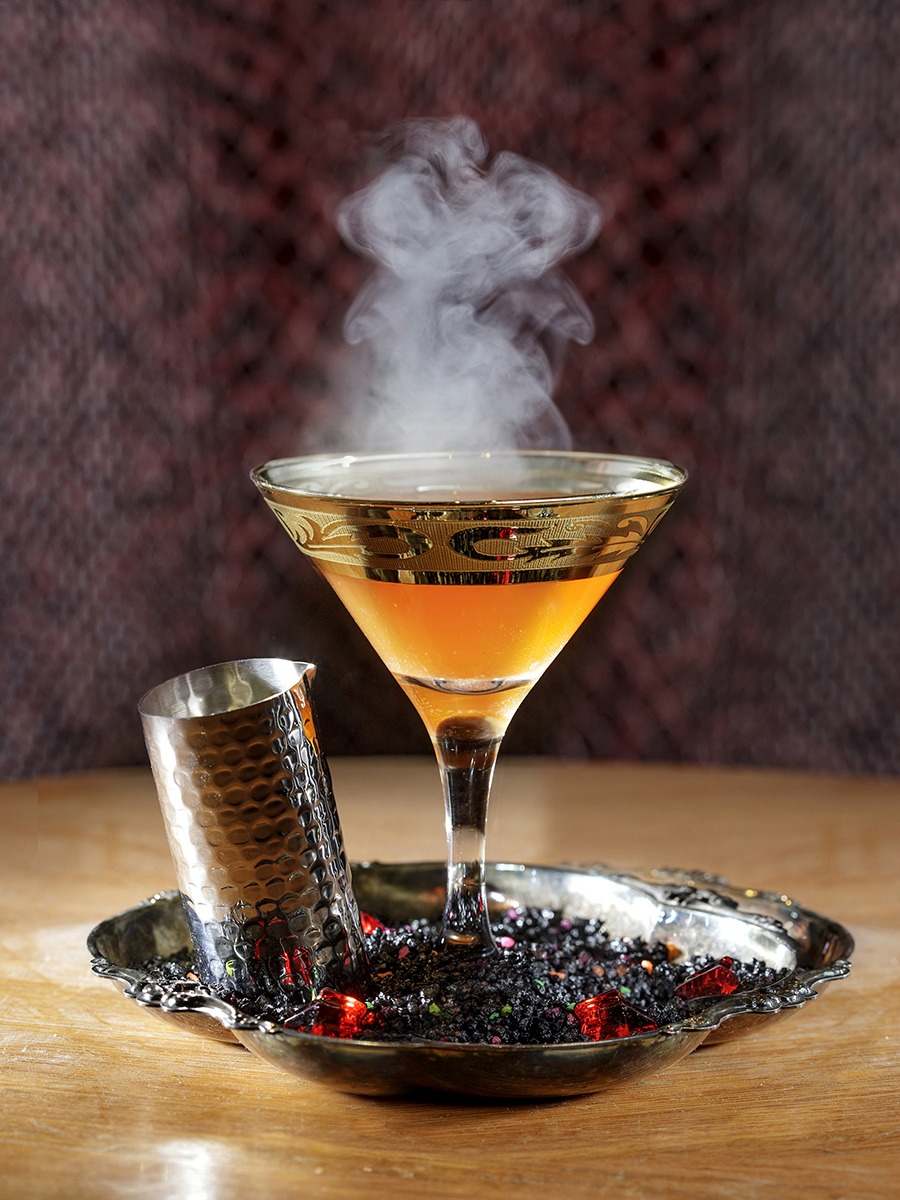 A cocktail at Wink & Nod. / Photo courtesy of Wink & Nod

Put his menu of vibrant flavors in the “treasure” category, with goodies like smoked salmon pâté spotted with pickled mustard seeds, served alongside roasted honeycup squash and a classic burger. It’s tempting to call the menu shareable, though DiBiccari says that eating is a communal experience and everything is shareable. Use the prices, then, as your portion cheat sheet. Snack on the crostini with French Chabichou du Poitou goat cheese and citrus marmalade if you’re hanging in the lounge with cocktails, or dive headlong into the chicharrón-like porchetta served with grilled broccolini and oven-dried grapes for a heartier meal.

His favorite dish on the menu is the crudo, which features Cape Cod bay scallops served with radish, dill, pimenton, and sesame. The star just might be his passata sauce, based on the Italian tradition of gathering San Marzano and plum tomatoes at the end of the summer and crafting a preserved sauce. He adds honey and the decidedly un-Italian yuzu for zing. “If you open a jar of this stuff, it’s unbelievable,” he says. “It smells like summertime.”

Other highlights include steak frites with a generous helping of a rich red wine jus—based on a roasted veal bone stock, the sauce takes three days to make—and a house-made spaghetti with green crab gravy that pays homage to his Italian grandmother’s lobster gravy. The hummus is probably the thing he worked on the longest, he says. After sampling the hummus at popular Israeli spot Dizengoff in Philadelphia, he pulled the dish off the menu at Tavern Road for months while he relearned how to make the spread. He also served the roasted garlic and lemony delight at his previous Wink & Nod pop-up, Humaari; at SubRosa, it’s spiked with Turkish chili pepper. 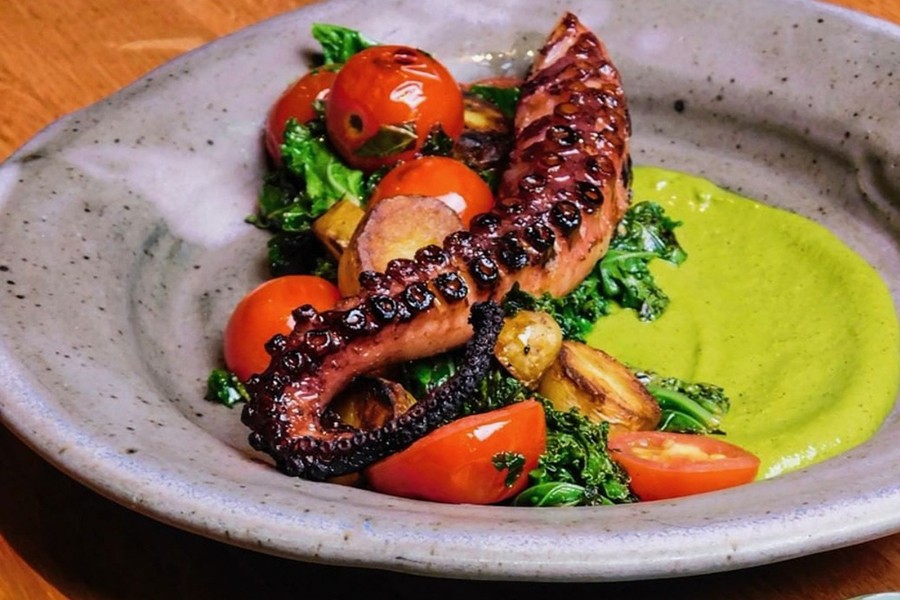 The menu also boasts bites built around offerings of micro-vendors who popped up during the pandemic, including arancini by Koselig Posto, pupusas by Dos Manos Kitchen, and vegan gyoza by Mimi’s Chūka Diner. Meanwhile, Maria Linquata of Beeda Baking Co. delights with dessert, which includes an old-school caramel apple upside-down cake on the opening menu. “I’ve been able to outsource to people that could make these products better than myself,” DiBiccari says, “and they’re people that I really wanna support.”

Up next, he’ll help support local artists, picking who will grace the walls of the restaurant over the next few weeks. For now, though? You can come on in and savor his own masterpieces on the plate. 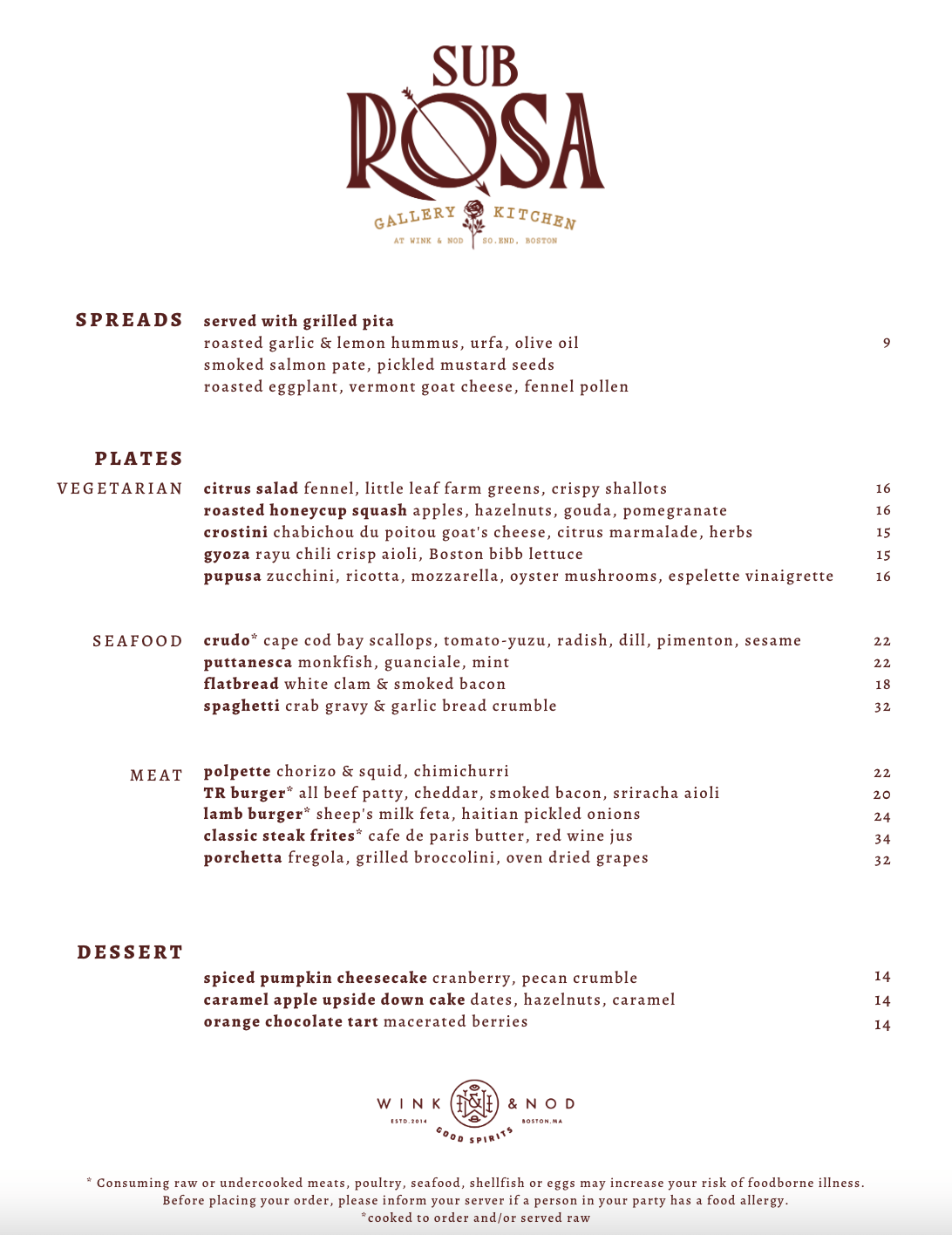 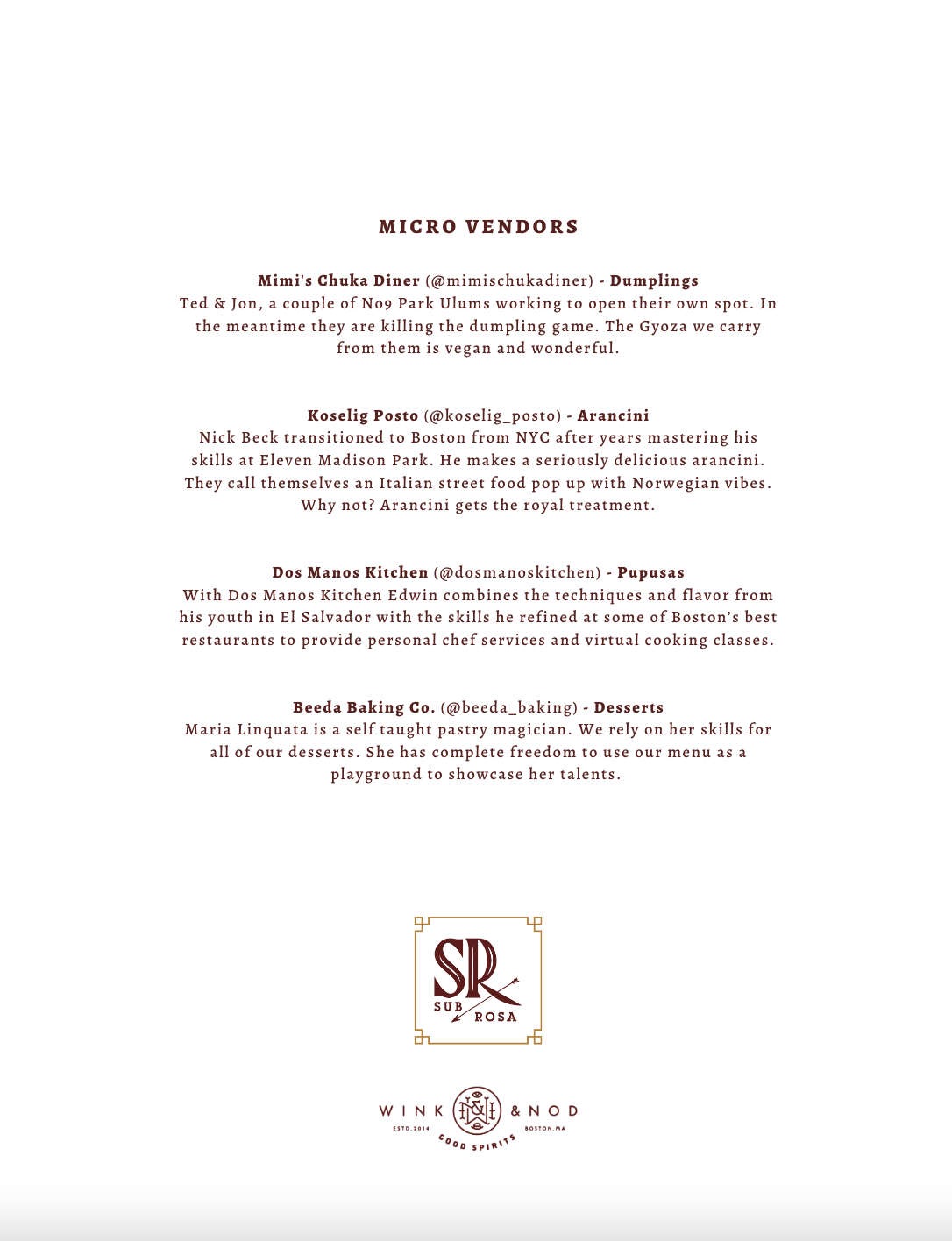