Where to find the top varieties around town. 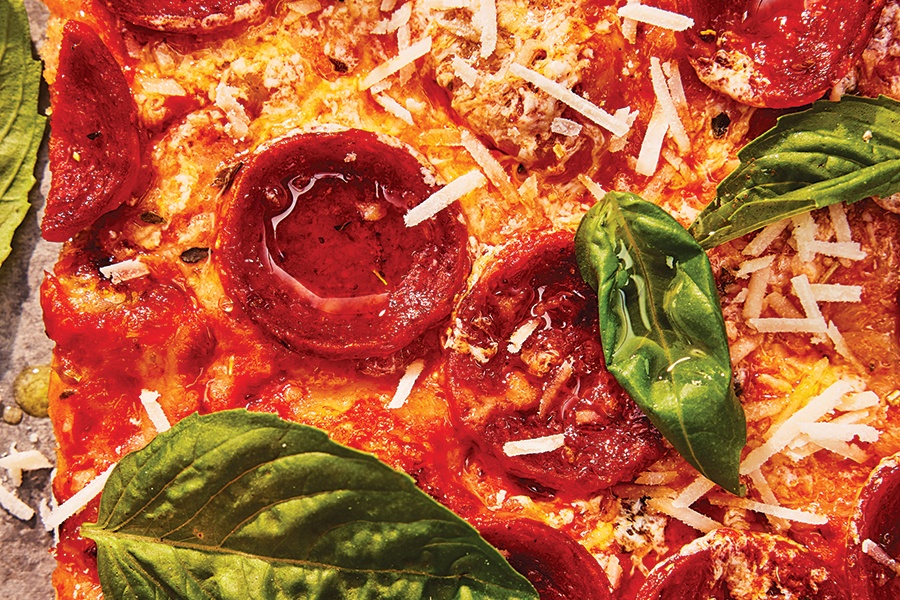 Authentic Neapolitan pizza must follow very specific rules, but lots of locals nod to the style with a soft, puffy crust; a quick trip into a hot wood-fired oven; and lots of fresh, local toppings.

In the Neapolitan style, this Davis Square restaurant blasts its beautiful pizzas in a wood-fired oven that reaches more than 850 degrees and makes its mozzarella in-house daily. The flour and San Marzano tomatoes come straight from Italy, but Posto highlights local purveyors for most of its other ingredients. There’s a classic margherita, sure, but you’ll also find everything from “Spicy Meat Lovers” to a white pizza topped with Brussels sprouts, smoked bacon, maple syrup, and an egg.

A caveat: This new Cambridge restaurant’s pizza isn’t quite Neapolitan; it’s actually a Neapolitan offshoot called canotto (which means dinghy, because the extra-puffy crust looks like a raft). No one else in town is offering this style (yet), but it’s only a matter of time before the super-fluffy Neapolitan-ish pies build a following here. Si Cara tops them with some unexpected ingredient combos, like lamb with pickled eggplant and sesame gremolata. 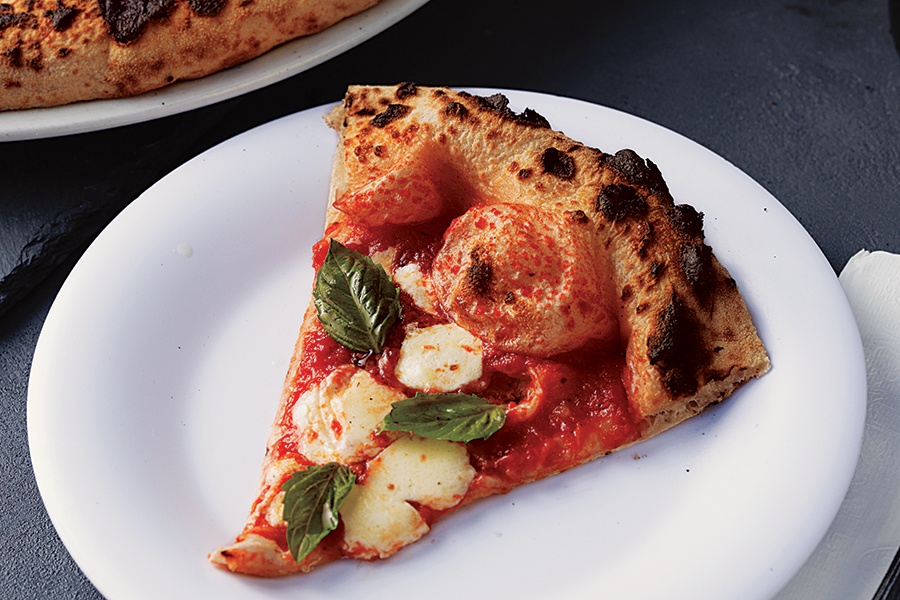 This tiny nook in Chelsea has been serving some of Greater Boston’s best Neapolitan-inspired pizza since opening in 2015, with a char-spotted crust that’s light as a cloud. Although the team takes the craft seriously, they’re not afraid to have a little fun: There’s Nutella pizza for dessert. But back to themain course—the salsiccia is a must, topped with house-made fennel sausage, cherry peppers, pecorino, and oregano. 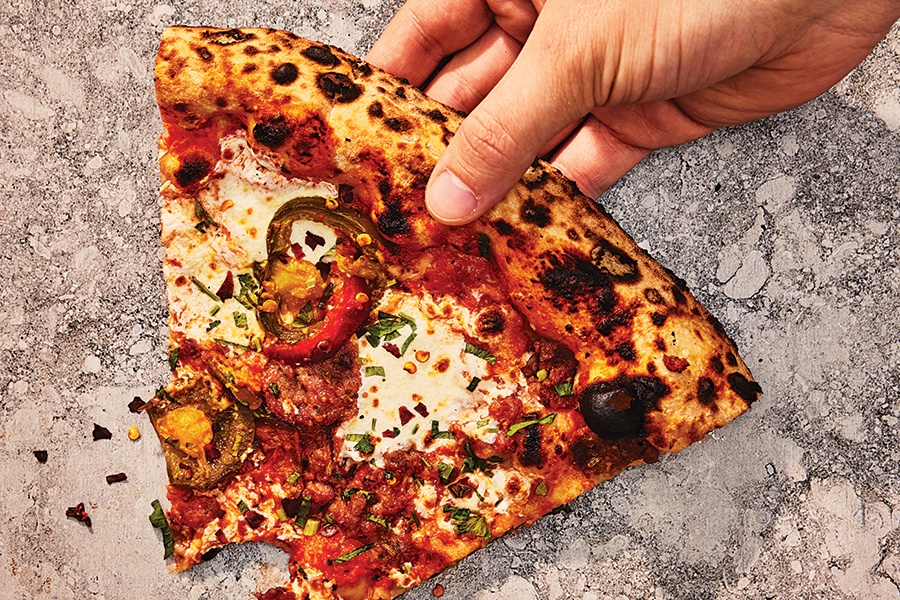 Wood-Fired (but Not Neapolitan)

Other local spots keep the wood-fired oven but deviate farther from the Neapolitan rulebook, toying with quirky toppings, aggressive char, and a blend of influences from other favorite pizza styles.

Both Stoked locations are a delight, and both make killer pizza, but if you’re looking for wood-fired, head to the original in Brookline. The lineup of 12-inch pies starts simple with selections like pepperoni (crumbled, not sliced!) with optional hot honey (say yes) and ends somewhere in cheeseburger-pizza land. Also on the menu: ample vegetarian options and a terrific lineup of tropical cocktails.

The popular Kendall Square spot makes its own mozzarella and gives its pizza dough 30-plus hours to ferment, which creates plenty of character to stand up to hearty toppings like the meat trio on the “Carnivore”—soppressata, sausage, and bacon—or the world’s most controversial pizza, the Hawaiian, with smoked pork shoulder and roasted pineapple salsa. The creative beer list adds to the fun.

Patio season, in particular, is a blast at this Charlestown favorite, but head in year-round to enjoy wood-fired pizzas (and wood-roasted accompaniments like meatballs and mussels) and craft beer. You can’t go wrong with the “Killa B” (Genoa salami, tomato sauce, mozzarella, and local hot honey) or the spicy clam pizza (local clams, tomato sauce, pecorino, chili flakes, and gremolata). 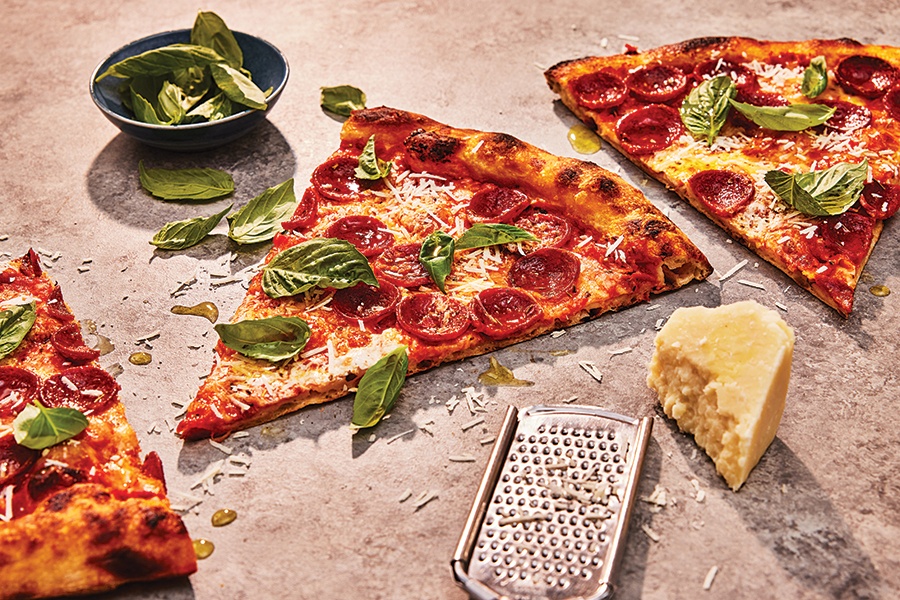 You’ll find a few exemplary versions around Greater Boston, although most shops will be quick to call their pizza anything but New York–style. Whatever the name, these hand-tossed, thin-crust masterpieces scratch the same itch and lend themselves particularly well to slices.

One of Greater Boston’s best pizzas right now is served at a casual sandwich shop in Everett. The Square Deli’s hand-tossed pizzas feature naturally leavened dough—that means it rises without commercial yeast—resulting in crust with a bit of extra personality and a perfect balance between chewy and crispy. The pepperoni, which forms little cups with charred edges, is a must-try.

This funky little Davis Square pizzeria is just plain fun, from the house-made gelato to the cassette-tape collection. As for the pizza, it’s big and floppy, with New York-ish vibes, but it’s sort of its own thing. The toppings are always interesting, whether kung pao chicken, bacon with chili maple syrup, or a seasonal special like late-summer peaches with roast pork and balsamic glaze.

Beacon Hill workers know what’s up: This weekday-only pizzeria in the shadow of the State House offers gigantic thin-crust slices—a full quarter of a 16-inch pie—that’ll fuel you for the rest of the day. Cheese and pepperoni slices are always available, as well as a special of the day, or explore the full pizza selection with toppings like grilled chicken with basil pesto or Italian sausage with garlic and crushed red pepper. 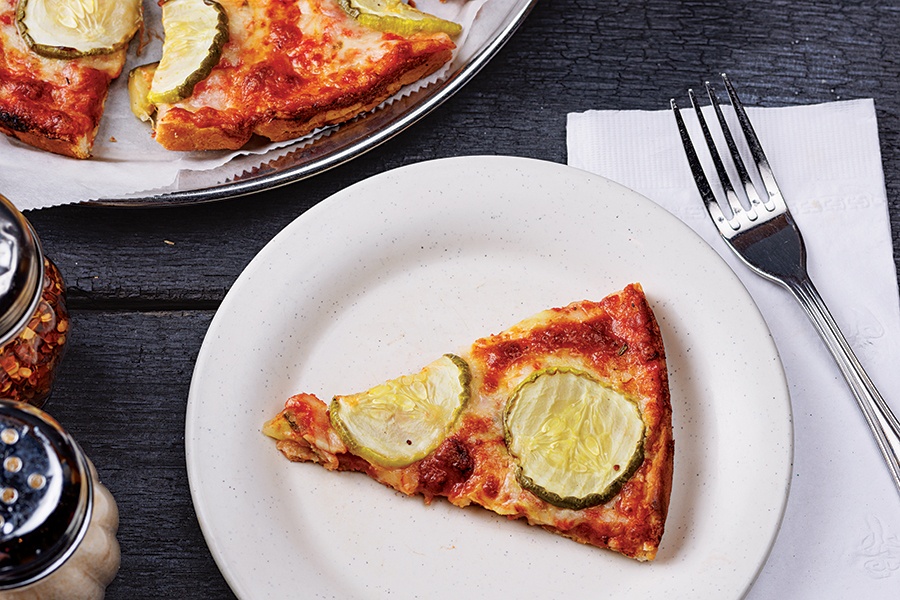 A true Massachusetts classic, this 10-inch round pan pizza features cheese—definitely cheddar, sometimes blended with mozzarella—that goes all the way to the edge, resulting in a “lacy” charred crust. Locals are passionate about their favorite spot, but since we can only include a few here, we’re highlighting one south-of-Boston mainstay (of many!) along with two much newer spots closer to the city.

Head down to Stoughton to get a feel for old-school bar pizza (Town Spa’s recipe—or, rather, the recipe by “Henry the Pizza King”—dates to 1955). You have to order the pickle pizza, and you have to order it with a side of honey mustard. Go ahead, dip the pizza in the honey mustard. Weird? Maybe. Delicious? Absolutely.

This pizza spot may be located in Southie within Castle Island Brewing Co., but the family behind Bardo’s has deep ties south of the city, having run the Randolph event space Lombardo’s for decades. Bardo’s pizzas remain true to the style, with a mozzarella-and-sharp-cheddar-cheese blend and simple toppings like linguiça and, of course, pickles. Or go a little modern with options like the “Cluckin’ Hot” with hot sauce, chicken cutlet, provolone, and red onion.

At Bow Market in Somerville, you’ll find another homage to South Shore bar pizza: Hot Box, from the team behind the sandwich shop Mike & Patty’s. It offers two regional specialties: South Shore pizza and North Shore roast beef. The pizza features a house tomato sauce, mozzarella-and-cheddar blend, and toppings like Buffalo chicken or onion and mushroom. Pair it with a beverage from one of Bow’s other vendors—beer from Remnant Brewing, perhaps, or wine from Rebel Rebel. 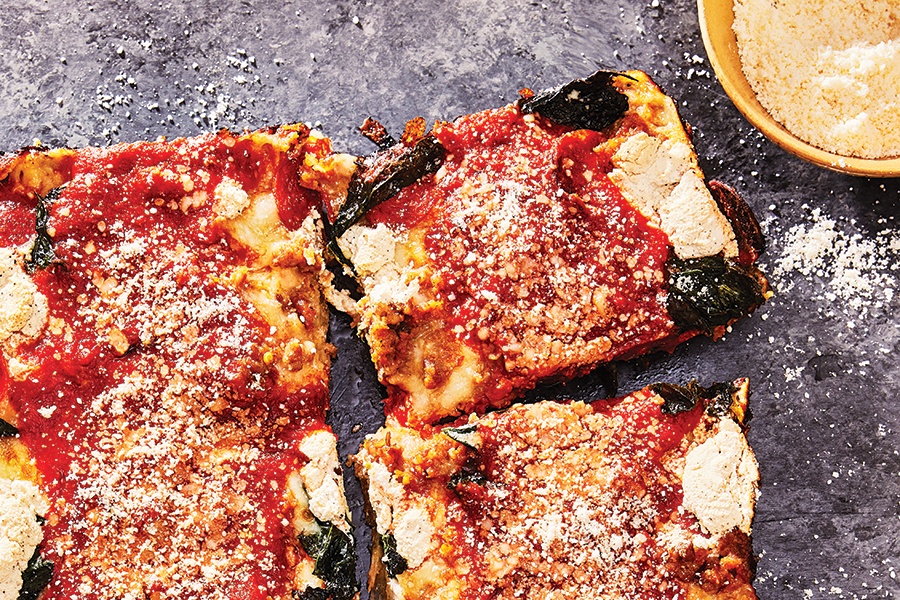 Mix a South Shore bar pie with Sicilian and put the cheese (ideally mild Wisconsin brick) on before the sauce, and you get Detroit-style pizza. A thick and spongy rectangle sliced into squares, it’s a comforting pie that moved east into the Boston area about five years ago.

This Somerville restaurant, which opened in 2019, bases its Detroit-style pizza on a pan–pizza dough recipe chef-owner Kenny Schweizer learned as a kid working at a restaurant near Utica, New York (pan pizzas are a little bit universal). The beef barbacoa pizza is a popular pick at Avenue, with braised short rib, pico de gallo, cilantro pesto, and beef jus. Bonus for plant-based eaters: A vegan cheese substitute can be requested on any of Avenue’s pizzas.

This no-frills takeout joint in Swampscott was one of the first to bring the style to Greater Boston back in 2017, after cofounder Dario Paone fell in love with Detroit-style pizza in New York, of all places, thanks to the Brooklyn-based chain Emmy Squared. Volo also sells round New York–style pies, but it’s best known for its 10-by-14-inch crispy-edged Detroit pizzas, topped with mild mozzarella, a swoosh of sauce, and toppings like chorizo with poblanos.

Night Shift knows that beer and hearty Detroit-style pizza are a great match. So a little over a year after its 2019 opening, it ditched the flatbreads from its menu, got a new oven, and started churning out Detroit squares developed with Little Branch Hospitality, a company that includes members of the Branch Line and Shy Bird teams. On offer: red pizzas like the “Shifty” (jalapeño, salami, ricotta, hot honey) and white pizzas like the “Figgy Piggy” (prosciutto, burrata, tomato-fig jam, black pepper).

“My favorite is Pino’s in Cleveland Circle (mushroom and pepperoni, reg, or Sicilian). Pino’s is my childhood pizza joint…it’s best the second day, reheated in a cast-iron pan with a lid.”

“Joanie’s Pizza in Chelmsford—hands-down the best pizza I’ve had in Massachusetts. The owners met working in the fine-dining scene in Boston. They use local, freshly milled flour, which really makes the difference. My favorite pie is called ‘The Truth’: It has eggplant, ricotta, caramelized onions, and hot honey. Slices are only served at lunch.”

“Galleria Umberto is the shit. Definitely my favorite slice. I’m also a die-hard Regina’s fan, but I’m old-school. Gotta give a shout-out to my Somerville peeps, too: Mamma Lisa’s gets us through some tough days.”

“My favorite slice of pizza has to be from Ernesto’s in the North End. I love the barbecue chicken—the sauce is tangy, the crust is crispy with a perfect undercarriage, and it has the right amount of cheese. And the size—come on! It’s a quarter of the pizza.”

—Nick Calias
Director of food and beverage, the Colonnade Hotel

First published in the print edition of the December 2022 issue, with the headline “Pizza Party!”