Mei Mei has opened its new dumpling factory, café, and classroom space in South Boston, and the oozy-egg scallion pancake sandwich is on the menu. 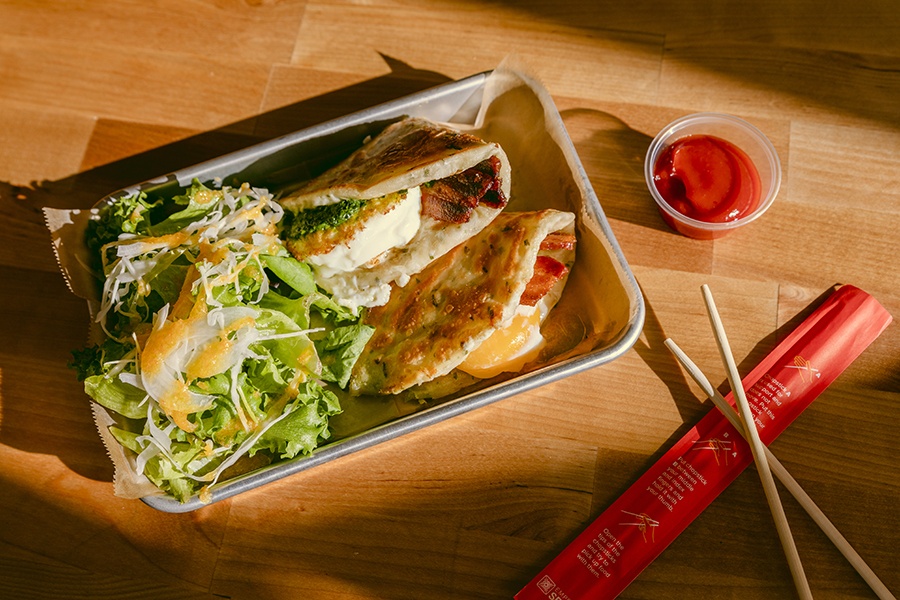 Picture a sandwich, but the bread is a folded scallion pancake. Inside, there are two oozy eggs, melted Vermont cheddar, an herb-packed green pesto sauce, and optional bacon. Add a side of spicy ketchup, and you’ve got a Double Awesome.

“It’s kind of like a quesadilla, crossed with a breakfast sandwich, crossed with a flatbread sandwich,” says Mei Mei cofounder Irene Li. The Double Awesome has been a Boston favorite since the Chinese-American food business got its start as a food truck over a decade ago, but it hasn’t been available regularly since the pandemic started, when Mei Mei’s Audubon Circle restaurant changed gears and eventually closed. Now, Mei Mei is back—this time as a South Boston dumpling factory, classroom space, and café. And, delightfully, so is the Double Awesome.

“It’s the kind of food that we would eat as kids,” says Li, who founded Mei Mei with siblings Andy and Margaret. “When you have a Chinese pantry and you’re also an American kid, you’re going to make yourself a scallion pancake grilled cheese at some point; it’s just going to happen. I love it because it’s kind of an expression of our point of view, who we are, and how we think about food.”

A quick primer on the evolution of Mei Mei over the years. In 2012, the business began as a food truck, then called Mei Mei Street Kitchen, and quickly made a name for itself thanks to tasty Chinese-American fare like the aforementioned Double Awesome and a focus on local, responsible sourcing. An Audubon Circle restaurant opened the following year, still highlighting fun street foods (including award-winning dumplings), but also getting into creative full-service dinners. 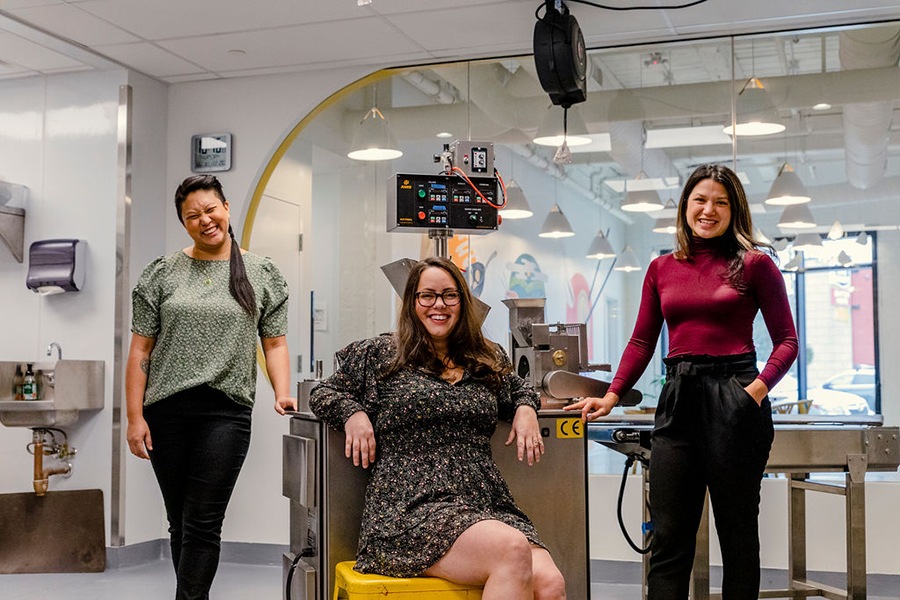 Along the way, there were a variety of changes, including a transition to open-book management in 2017—a practice that allowed the entire staff to have full access to the restaurant’s financial information. (The restaurant still uses a modified version of this model today, says Li, who even gave the general public a detailed look into what it costs to run the restaurant a few years later). Also during the Audubon years: the addition of a bottled-sauce line, a temporary takeout location inside a Seaport shipping container, and a cookbook.

There was a trio of big 2018 updates: Li officially took over operations as her siblings moved on to new adventures; the food truck came off the road, except for private events; and the restaurant moved away from full-service dinners, switching to a fast-casual, all-day menu.

Then, 2020 hit. The Mei Mei dining room closed in March; at the end of September, Li announced publicly that Mei Mei would become “maybe a packaged dumpling company, maybe a virtual events and catering business, but almost certainly not a restaurant.”

“We were trying every possible way to keep the business afloat,” says Li about that period. (There were virtual cooking classes and prepared food pickup, for example, while Li and the team also busied themselves with community service, including getting groceries to frontline workers.) A regular customer suggested that the team try setting up at his local farmers market, since Mei Mei has such a focus on farms and local food. Li was initially hesitant, she says, because vending at a farmers market is more for startup businesses, not a bigger company that’s been around for years. “Then my business partners were like, ‘Irene, we’re a startup again. This is COVID.’” 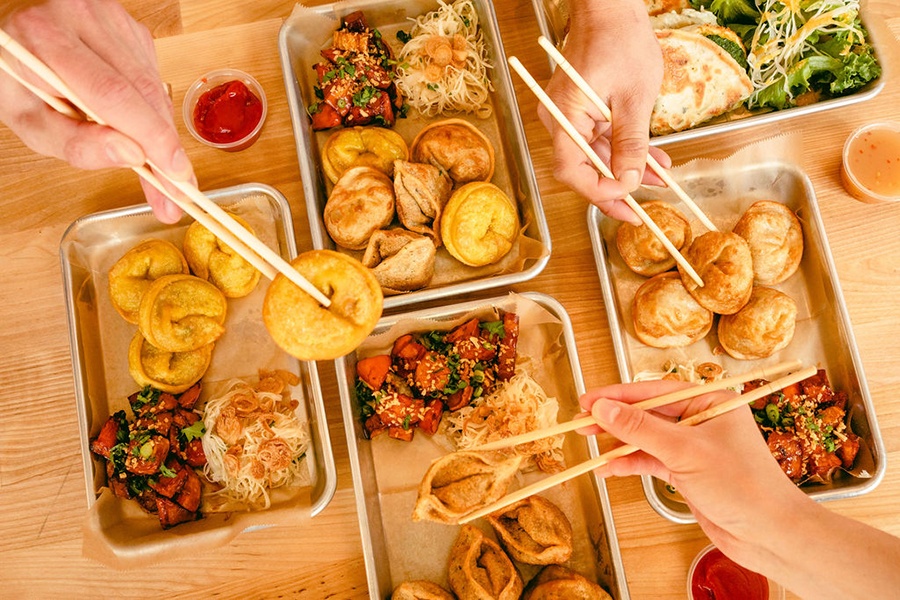 So off they went with some dumplings and other items. “That first day, we actually had to restock twice, I think, because people were just going crazy,” says Li. “To have that feeling during COVID of, ‘Oh my god, something’s working,’—that was really huge and jumpstarted our trajectory toward what it would look like to be a dumpling company.”

To be a dumpling company, Mei Mei needed a different space: The cozy, sunny Audubon Circle address wouldn’t cut it for a wholesale operation. But then an opportunity came up at South Boston’s Iron Works development, also home to pickleball bar PKL and a Castle Island Brewing Co. taproom (complete with its own pizzeria), among other businesses. Building out the space was an expensive project, and it required some community support through NuMarket, a crowdsourcing platform that gives fans the ability to help fund a business in exchange for 120% back in credits to use once the business opens. The new space allows for both wholesale and USDA certification, the latter permitting wholesale products containing meat, like, say, Mei Mei’s lemongrass pork dumplings.

Mei Mei debuted its shiny new Iron Works space last week. “The way we think about it is like a brewery but for dumplings,” says Li. A giant window between the dining room and the production floor at the new location is “kind of reminiscent of the food truck,” she points out. “You can go, you can see stuff being made, maybe get a little tour. You get to experience part of the process, and then you have a snack, and you buy a six-pack to take home—you know, of dumplings.” The café portion is sort of secondary to the larger goal of expanding the wholesale dumpling business, but it’s the most community-facing part of the equation, and there’s a “symbiosis” between all the elements, says Li.

“It’s an important way to remind guests that a lot of work goes into this, there are real people who make this food—and it’s also really entertaining to watch the machines. I think that it builds so much appreciation for a product when you can see how it’s being made.” 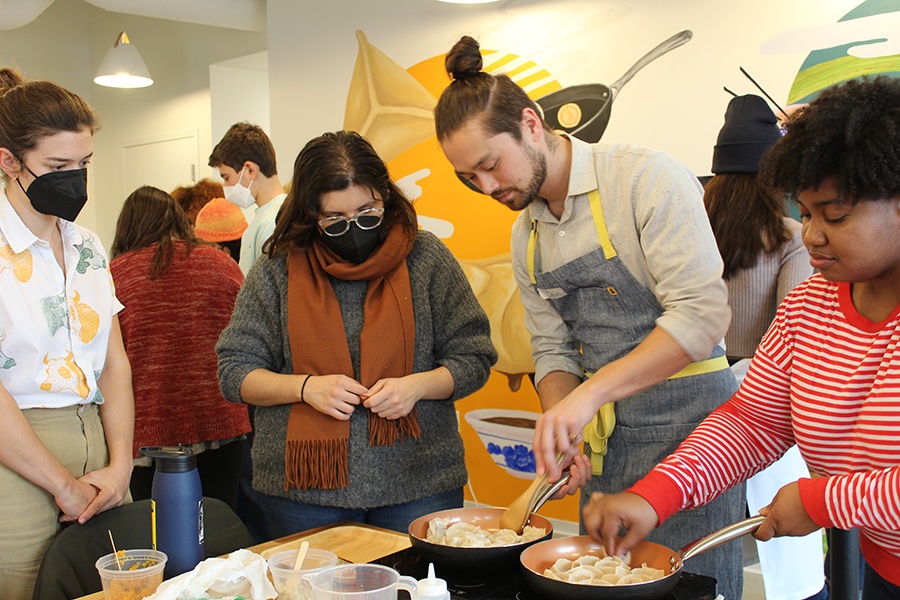 The café, which is geared toward lunchtime for now, is serving hot dumplings, that famous Double Awesome, and a couple other snacks. On the dumpling side, you won’t want to miss the cheddar scallion potato dumpling. “That has a very special place in my heart,” says Li. “I grew up in Brookline, where I ate many delicious knishes and other starches filled with other starches, so I never get sick of those. I think people who have eaten stuffed foods, or grew up eating stuffed foods from other cultures, also connect with that.”

New menu items might be coming later in the year, says Li, “and we’ll start thinking about [hosting] pop-ups,” noting a love of supporting other folks “doing cool food stuff.”

On the wholesale side, Li and the team are “very ambitious,” she says. “It’s such a great feeling to know that we can produce as many dumplings as Boston wants to eat—or at least we’re getting there.” While they’re starting with small local retailers, the hope is to expand to local grocery chains, then regional, then eventually national. “This is a totally different business than running a restaurant, so we know we have a ton to learn,” Li admits. “But we have ambitions to share our approach to dumplings—the taste of New England that is a Mei Mei dumpling—very far and very wide.”

For now, Mei Mei is open from noon to 6 p.m. Thursday through Saturday (starting January 26), with plans to add Wednesday into the mix in mid-February; plus, in-person and virtual dumpling-making classes are up and running. Li expects the team will “really be settling into a groove” next month. “Come warm up with a Double Awesome when it sucks in February.” 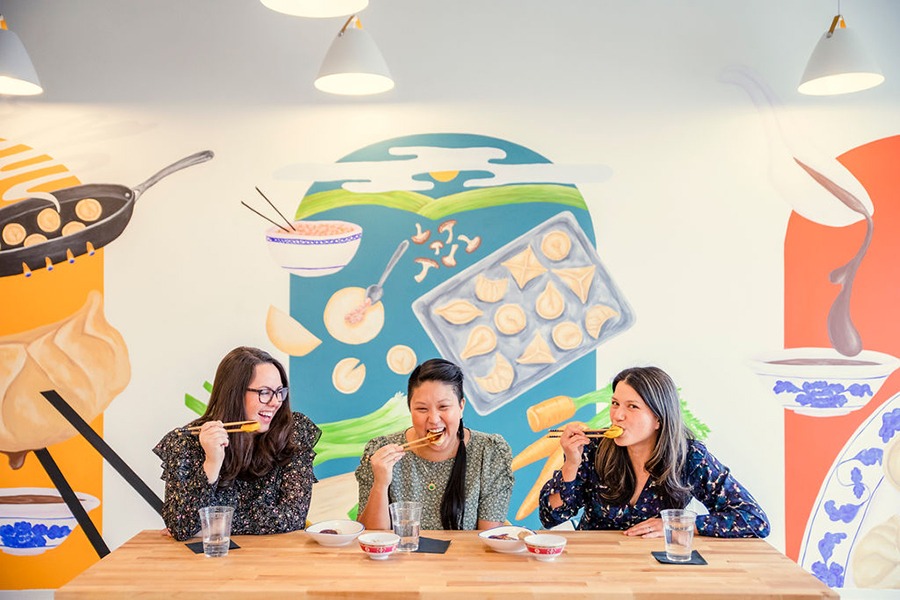