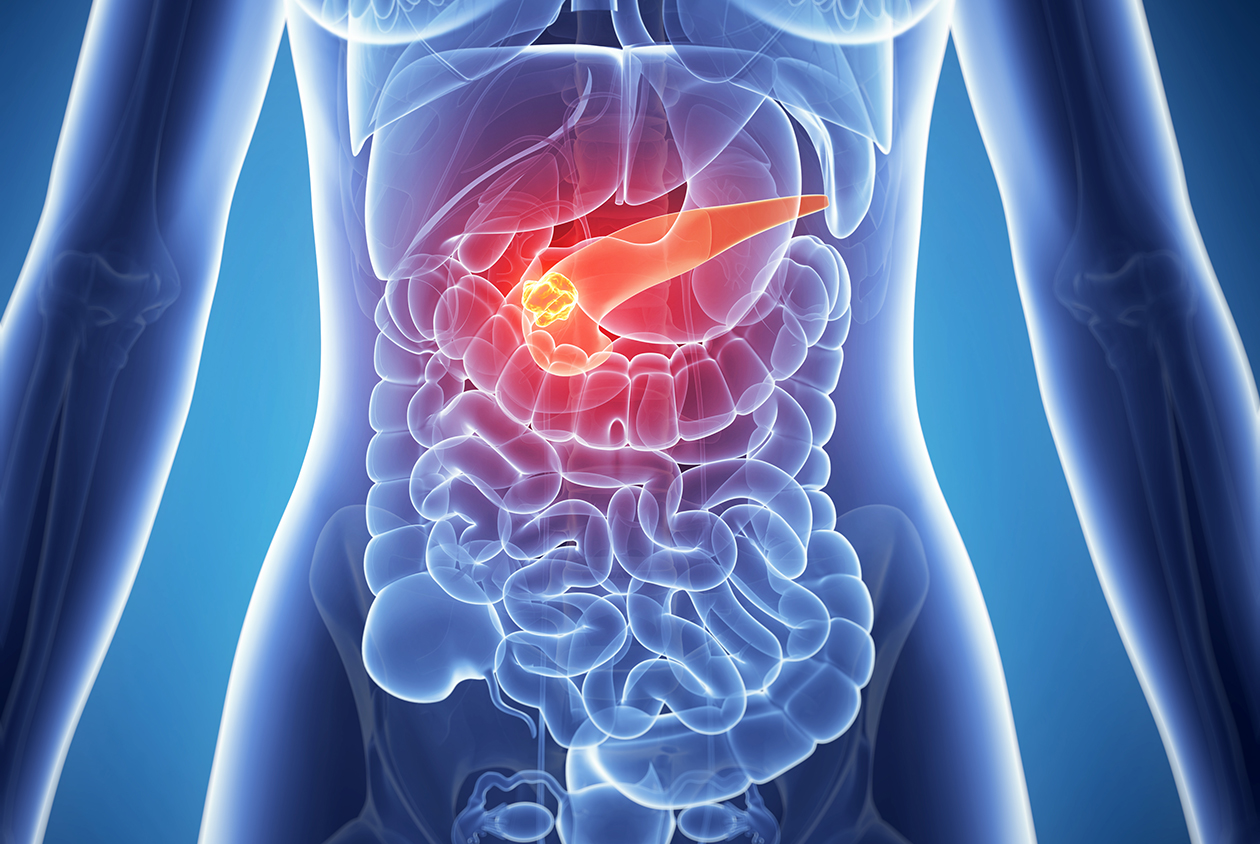 Jack Benny, Sally Ride, Steve Jobs, Margaret Mead, M. Scott Peck and Patrick Swayze have something in common: all were diagnosed with pancreatic cancer, an extremely fast-growing disease that often gives little warning until it’s too late. Researchers from the Massachusetts General Hospital Cancer Center have identified a new therapeutic target that may offer new hope for treating this disease.

Currently, chemotherapy is the primary treatment for pancreatic ductal adenocarcinoma (PDAC), the most lethal form of pancreatic cancer – one with less than a five percent survival rate after a year. Although researchers don’t know much about the molecular processes that determine tumor growth in PDAC cases, they do know that mutation in a gene called KRAS, which is involved in the regulation of cell division, is prominent in PDAC. But targeting that gene has been very difficult, and the hope is that better understanding of the mechanics of the tumors themselves could lead to alternative effective treatments.

Raul Mostoslavsky, MD, PhD, at the Mass General Cancer Center and Associate Professor of Oncology at Harvard Medical School, identified a pathway that is responsible for tumor growth in 30-40% of PDAC patients. He and his team discovered that the cancer’s growth depends on the expression of the protein lin28b, which is regulated by an enzyme called sirtuin 6 (SIRT6).

Mostoslavsky’s research shows that reduced levels of SIRT6 can activate the lin28b protein in PDAC cells, kicking it into high gear and stimulating tumor growth. However, knocking out the gene that codes for the lin28b protein could stop cancer cell growth, making it a strong therapeutic target for PDAC cancer.

SIRT6’s role in PDAC is important for several reasons. SIRT6 is involved in the rearrangement of chromatin (the protein, RNA and DNA that make up chromosomes), allowing DNA-binding proteins to access DNA and control gene expression (“epigenetic regulation”). On a cellular level, a deficiency of SIRT6 contributes to the growth of colon cancer, and is also associated with stomach, skin and squamous cell carcinomas. Based on that knowledge, the SIRT6 enzyme might be a broad tumor suppressor.

To determine the specific relationship between SIRT6 and PDAC cancer growth, the researchers conducted a genome-wide analysis of chromatin changes in PDAC. What surprised them was that its role in PDAC is different than it is in colon cancer, in which it produces what is called “Warburg effect” that enhances tumor growth by stimulating excess glucose uptake.

The other part of the puzzle involves lin28b’s role in PDAC. Its functional role and how it is activated are not well understood, and researchers have not previously studied lin28b in relation to PDAC. What they do know is that it is an oncofetal protein, which means it is typically present in embryonic stem cells during fetal development. It’s also found in adults with certain cancers. “One possibility is that these cells are up-regulating these [lin28b] fetal proteins to make the cells look more embryo-like,” Mostoslavsky says. Embryonic stem cells are poorly differentiated (less specific). When cancer cells are less specific, the tumors grow more aggressively.

Lin28b inhibits the production of a family of 12 tumor suppressor microRNAs (MiRNAs). They tend to be suppressed in embryonic tissues, but highly expressed in normal adult cells. This is the opposite of what lin28b does. Since lin28b is not normally expressed in adult cells, drug therapies targeting it might have an easier job. “I strongly believe that inhibiting lin28b with small molecules will have a major effect, at least on this particular subset of pancreatic cancer,” Mostoslavsky says.

The challenge is getting the drug to the tumor because the pancreas can be difficult to access. However, many labs are developing tools to make access easier.

The Mass General Cancer Center is now offering podcasts centered around our investigators’ recent publications in high-profile journals. Each expert gives insight into who they are and what inspires them to do what they do every day. A deeper dive into their research will better your understanding of where our experts’ ideas come from, where they will go from here, what the future has in store in their particular field of research. Listen to Dr. Mostoslavsky’s podcast on this topic by visiting our episode library. The full article text from our June 2017 Advances at Mass General Cancer Center is available here.