Earlier this year, when Linda Friend checked the work of contractors redoing the walls in her Greek Revival home in Hingham, she found that the plastering and painting were perfect. Too perfect—she no longer could discern the uneven texture of the old horsehair plaster wall. And so Linda sent the workers home, scratching their heads, for a job too well done.

“I didn’t really want it to be perfect,” says Linda, a retired graphic designer. “We decided to paint the rest ourselves and leave the imperfections in the plaster. I wanted a piece of old to remain.”

[sidebar]Linda’s husband, Bill, former general counsel of the now defunct Hills department stores, shares her enthusiasm for history and the charming scars it has left throughout their 1848 property, which comprises a 4,000-square-foot two-story house and a 700-square-foot barn. He points out century-old scribbles on the door of the barn, and collects antique nails from the house in a jar. As we sit in the Friends’ new addition, a soaring contemporary space designed by Cambridge architect Jim Sandell, the couple steer the conversation to the past; they are eager to put this architectural addition in context. 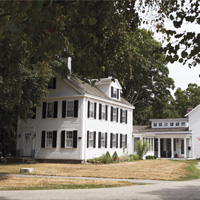 paint, façade with closed pediment, and narrow cornice board that wraps around the whole structure—is part of Glad Tidings, one of Hingham’s six historic districts. Then Bill, who complements his wife’s calm with a jocular demeanor, playfully mentions a seedier snippet of local history. “This was the old stagecoach road, from Plymouth to Boston,” he says of Hingham’s Main Street. “We’re almost exactly halfway. There was a famous house of prostitution up on the corner called Queen Anne’s Corner—[Queen Anne] was a prostitute. There was a big fountain, which is still there; horses would get water while the guys were inside.”

Ever since buying the house in 1988, the Friends, who have a 24-year-old daughter named Elle, have considered it a work in progress. Over recent years, the family felt increasingly constricted by the historic layout: Whereas numerous small rooms with fireplaces made sense for 19th-century heating systems, they make 21st-century entertaining challenging. “The house was difficult to live in because it was long and narrow,” says Linda. “It was very hard to make it a social space. We wanted to open it up and make it lighter.”

The couple turned to Sandell, of Cambridge-based Carr, Lynch and Sandell, to draw up a number of plans for a roomy new kitchen and gathering area. Some fit within the original footprint of the house, others did not. Ultimately, the Friends latched on to Sandell’s proposal to link the house and barn with an addition. The resulting space—which features an entryway, informal living room, pantry, and large kitchen with a clerestory that soars to 16 feet—is spare, spectacular, and soaked with light. 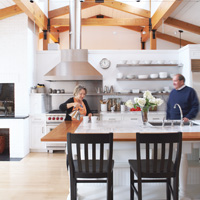 The renovation, including planning and construction, was completed in 2005 after nearly three years’ work (while declining to reveal the exact cost, Linda describes the process as “expensive”). To make the transition from old to new more seamless and the overall look expansive and flowing, several walls on the ground floor were knocked down. Yet the Friends salvaged doors, windows, and radiators from the existing structure and incorporated them wherever they could. “It takes a lot of time to create new materials,” says Sandell. “By preserving, you’re using up less of them.”

All through the house, Linda points out several items that have been recycled over the years—a game of architectural switcheroo that began with previous owners. In the barn, for instance, there are kitchen cabinets that came from an earlier version of the house. The Friends’ addition uses doors from the old house, which also serve as stylistic templates for additional doors and cabinetry in the new kitchen and pantry. The marrying of heating systems was a delicate process—combining old cast-iron radiators and pipes with thin plastic tubing for radiant floor heating—but entirely possible with the help of a like-minded contractor.

Beyond structural elements, the Friends are constantly recycling and rotating antiques in their home. “My dad had five siblings and only one of them had children, apart from me. So we’ve inherited a lot of stuff,” Bill says as he gestures toward a small mountain of furniture in the second floor of the barn. In the library, a newly opened-up room within the home’s original footprint, there are Japanese wooden chests with exotic carvings inherited from an aunt of Bill’s who spent a few years in Okinawa during World War II. In the informal living room that abuts the kitchen, there’s a simple wooden cradle resembling a sled, in which Bill’s grandfather was rocked, as well as Linda and Bill’s daughter.
Although Linda and her husband enjoy unearthing heirlooms and placing them around the house, she adds, “We love the old, but we also love the new.” In the hallway that leads into the guest bedroom, two jaunty antique drums rest beneath a minimalist copper-top side table from Crate & Barrel. 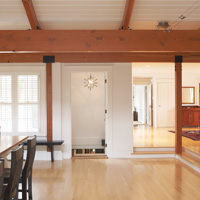 The Friends’ daughter, Elle, on the other hand, looks for any opportunity to avoid buying new things. “My daughter has just put together a compost bin from boards that came off the side of the barn—she’s been after us to compost—so those boards have another life, as well,” Linda says. “She’s into sustainable development. She’s trying to convert us.”

Linda and Bill may credit Elle with showing them the virtues of green living, but the couple made many environment-friendly building decisions intuitively. They opted, for example, against central air conditioning. “I grew up without it,” says Linda, a native midwesterner like her husband. “I like having the windows open.”

Sandell chimes in, observing that the kitchen’s high ceiling attracts hot air through natural convection that can be released by opening the clerestory windows. It is also notable that these windows let in substantial light—so much so that the Friends usually don’t turn on lights in the kitchen until nightfall. Another clever design decision: Sandell chose to keep the wall that separates the kitchen and pantry low, so that sunlight spills over from the clerestory windows to illuminate the smaller space as well.

Perhaps most ingenious about the addition, however, is how subtle and historically sensitive it appears from the outside. When it came time to convince the Hingham Historical Commission that adding on to the Friends’ home would not be out of keeping with tradition, Sandell referenced the book Big House, Little House, Back House, Barn: The Connected Farm Buildings of New England. In it, author Thomas C. Hubka traces the history of regional farms during the 19th century, showing how farmers often connected freestanding structures like homes, barns, and sheds for reasons relating to changing agricultural practices. Although the Friends had different motivations for linking their home and barn, they and Sandell argued that the result would be faithful to historic New England architecture. 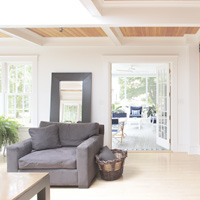 “We knew [the addition] would have to be something that satisfied the historical commission,” says Sandell. “Not necessarily a reproduction, but something that was sympathetic with the house and barn. So we put a lot of energy in trying to do that. There was one member who kept scratching his head a bit. But from the beginning, I think, they realized: They’ve done their homework, this is good.”

The new addition even delivered an unexpected bonus: By connecting the house and barn, the Friends now find they are using a charming porch off the back of the latter that had been largely ignored. “We’re keeping the wicker,” says Linda, eyeing the weathered furniture on which her daughter and husband are slouching. “It needs to be painted but we haven’t gotten there yet.” Adds Bill, “It’s comfortable, and the cat likes it.”