Ready, set, grow with these tips from one of Boston's newest design talents. It takes more than spring’s abundant sunshine to coax a New England backyard back to life. But with picnics and deck parties just around the corner, who has time for a full facelift? Enter outdoor and event consultant Marc Hall. Previously Winston Flowers’ creative director, he now runs his own blossoming company, Marc Hall Designs. Over the years, Hall’s green thumb has transformed even the murkiest of mud puddles into beautiful outdoor oases, all with acute attention to detail (this, after all, is the man who helped design the flowers for Chelsea Clinton’s wedding). Here he gives us the dirt on the latest trends in outdoor design — and explains how to get your patio or backyard summer-ready in no time. Bail Out Your Bulbs
For years we’ve treated tulips as mere garden accents by planting them in dense clumps. But that’s changing, says Hall, thanks in part to the rising popularity of Dutch landscape architect Jacqueline van der Kloet. Her recent designs for major New York City gardens — in which bulbs were spread about like perennials — have created a big splash among landscape devotees. “To avoid mixing up the setting, she recommends using bulbs of the same species in large borders,” Hall says. For a fresh look, plant tulips amid hostas (particularly the variegated species), or among crocuses with a flowering groundcover like leadwort. Bring the Inside Glam Out
Forget clunky deck chairs and cheap umbrellas. Now that manufacturers like Sempre, Loup & Co., Janus et Cie (above), and Gloster have stepped up their game, beautifully styled outdoor furniture has finally come into its own. With so many gorgeous options, designers are thinking of decks and patios as outdoor rooms that require as much careful planning as any interior space. In one project, Hall says, “we built a custom dining table and a kitchen, along with a potager and a birch grove for sitting in the shade. Spaces like these create new and wonderful places to entertain, dine, or just gather.” Get Elemental
“Water and fire are becoming de rigueur in the garden,” says Hall, who is seeing a growing interest in contemporary water walls, incandescent koi ponds, and fire pits. “Recycled-water [features] — designed to be environmentally friendly — require little maintenance and add significant elegance, movement, and sound to the scene,” he says. Fire, on the other hand, adds instant coziness to the great outdoors. To maximize space on a small terrace, Hall suggests looking for a pit that doubles as a coffee table, like Stone Forest’s Vesta Fire Table. 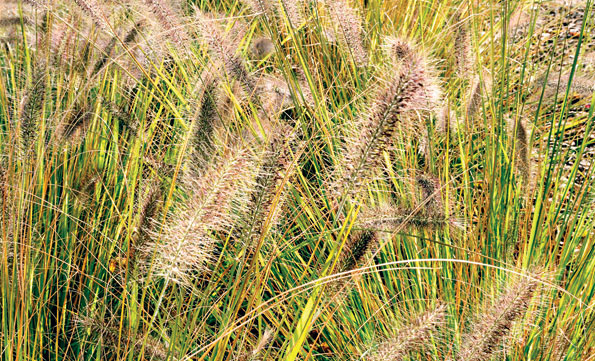 Don’t Hedge Your Bets
Tired of pruning shrubs? “Tall grasses can achieve the same effect, but capture movement that you don’t necessarily get with traditional hedges,” says Hall. Swap out chunky bushes with grass boundaries, screens, or large swaths — varieties like pennisetum and miscanthus flourish in New England’s climate. As you sip lemonade on your porch, the winds will whisper, Thank you.