The project, called Hatched: Breaking through the silence, will give Boston what it desperately needs: Something safe and fun to do outdoors. 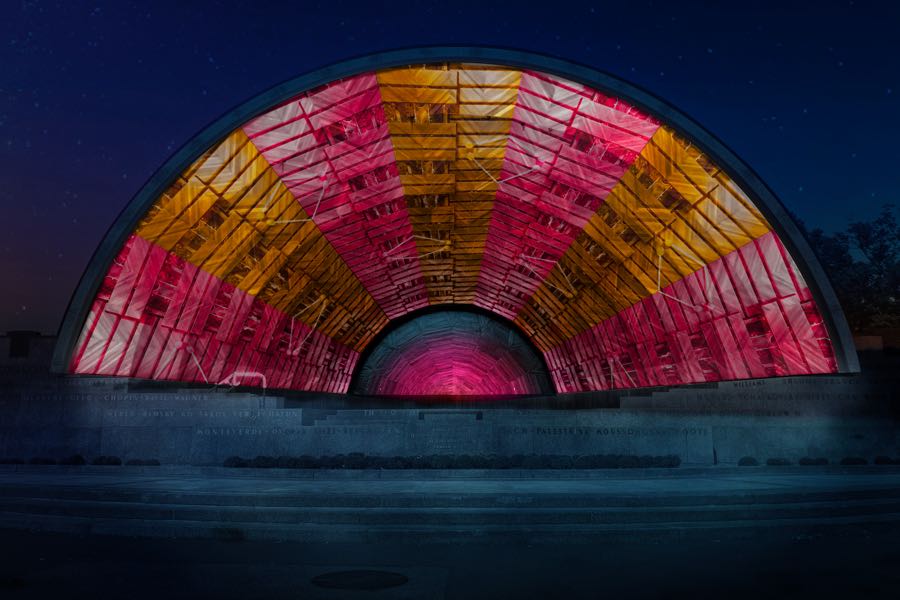 Rendering via the MF Dynamics

As is the case with so many of Boston’s beloved destinations, it’s hard not to think about the Hatch Shell on the Esplanade and get a little bummed out. All the celebrations that would normally take place in its giant shadow, like the Fourth of July Fireworks Spectaculars, the BSO performances, and all the free-to-all concerts held there every year, have been canceled. One of the loudest publicly-accessible outdoor spaces in the city has gone quiet, and dark.

But a new monthlong public art project slated to take over the Hatch Shell this winter will change all that, and in the process, give Bostonians something they have no doubt been craving of late: something cool to do outside.

Beginning later this month, the stage will host what the Esplanade Association is calling a “four week illumination and sound experience.” Called Hatched: Breaking through the silence, it will include laser-projected animations that will fill the 40-foot-tall arch, as well as music that can be played through smartphones and portable speakers.

It debuts on January 22, and viewings will last 15 minutes and run every 20 minutes from 5 p.m. to 9 p.m. each night through February 21. It’s free to all, and the Hatch Shell’s lawn will be open to anyone who wants to see the show up close while keeping a safe distance apart. The projectors, provided by Epson, will be weather-proofed, so the show will go on rain (or snow) or shine. The description of it on the Esplanade’s website sounds really neat:

The projection-mapped visuals for Hatched will celebrate the many sounds that Hatch Shell performers have expressed over the facility’s impressive musical history. Finkelmeier and her team will feature geometric shapes of musical instruments as kaleidoscope pieces, human hands magically tapping, scratching, and creating beats on the surface itself, and colorful animations accentuating the Shell’s Art Deco form – all set to new music composed by Finkelmeier and recorded by local musicians. Featuring a team of predominantly female-identifying artists and directors, Hatched will bring to light a balanced pedestal, an opportunity for underrepresented communities to “break through” and share their skills, vision, and voice.

Hatched is the brainchild of Boston composer and multimedia artist Maria Finkelmeier, of MF Dynamics, who says she hopes the piece will help reinvigorate the stage while it’s otherwise forced to remain in hibernation. “When I think of the Hatch Shell, I envision gorgeous music, community, and a love for my city. Memories of concerts, walks, and bike rides along the Esplanade come to mind,” Finkelmeier says in a statement. “With Hatched, my team and I are elated to create a new type of expression that brings original music, visuals, and new technology to the iconic structure, encouraging viewers to form a new memory of the space – a memory that will carry us into the New Year and beyond, celebrating creativity, resilience, and joy.” 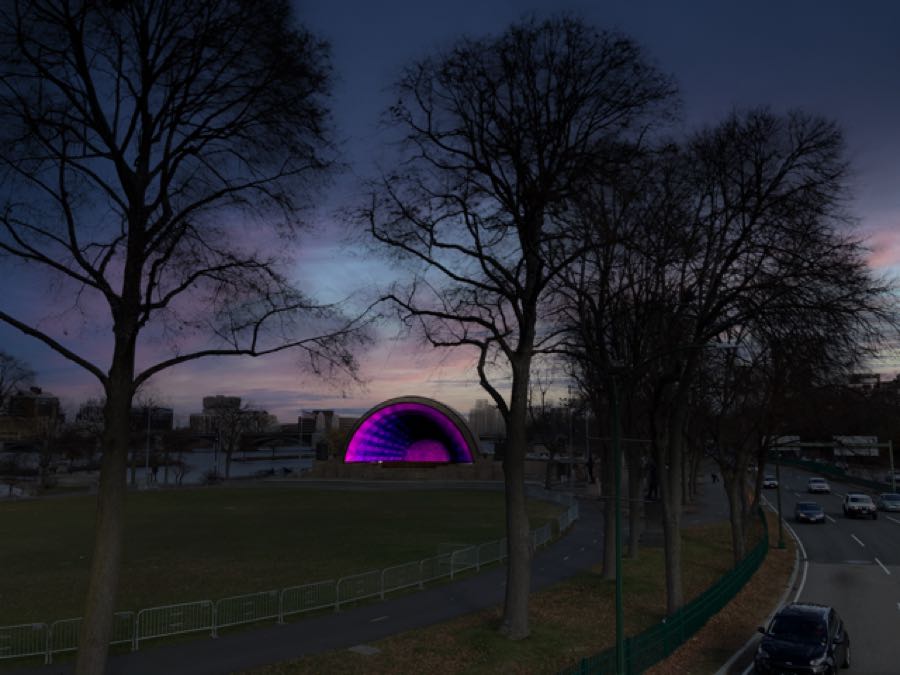 The project is a collaboration between the Esplanade Association and the Massachusetts Department of Conservation and Recreation, which are celebrating two decades of partnership this year. It’s also supported by LuminArtz, the arts group responsible for high-profile light and projection-based arts installations that include the city’s annual Illuminus festival.

At 15 minutes long apiece, the nightly illuminations won’t sustain an entire evening’s worth of socially distanced socializing, nor is it likely to fully satiate those who feel the absence of all that’s been lost at the Hatch Shell of late. Still, Hatched promises to provide what many of us have been sorely missing these days: a place to experience entertainment in a group setting, maybe meet up with a friend or two in a safe outdoor space, and collectively enjoy something nice together. Plus, it might just be the kind of thing that makes a walk down the Esplanade in the winter worth it—a reward for enduring the chilly wind in order to get up close to the action.

Some more information, via the Esplanade Association:

WHERE: Hatch Memorial Shell (best reached on foot from the Arthur Fiedler Footbridge)

HOW TO ENJOY: On foot, along the Esplanade, while wearing a mask and maintaining physical distance from spectators outside your household. The DCR Hatch Shell cannot be accessed by car. There is no site parking or rideshare drop off on site. 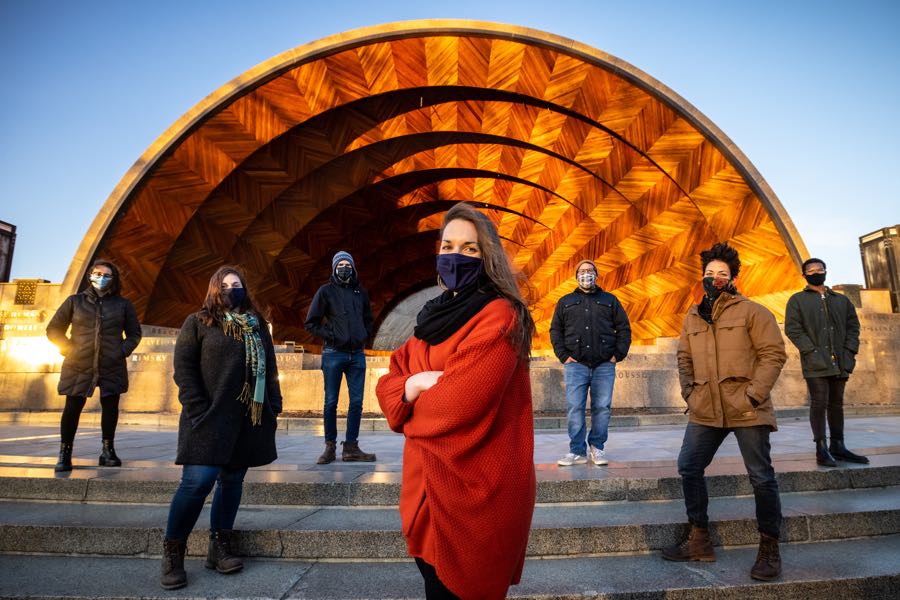 The team behind “Hatched.” Courtesy photo by Aram Boghosian