And yes, the immersive experience is pretty darn cool. 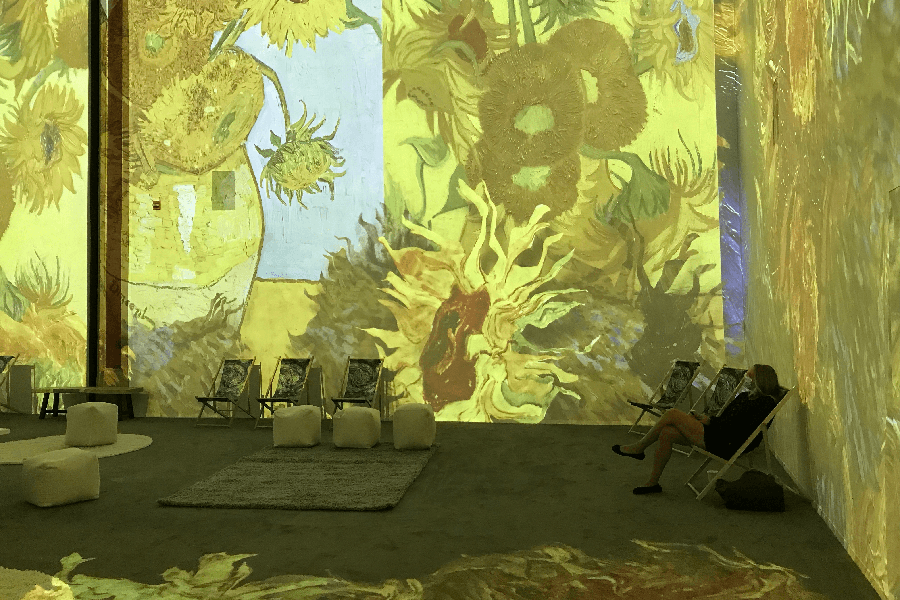 Van Gogh: The Immersive Experience at the Strand Theatre in Dorchester. / Photo by Makena Gera

Since it was first announced in March, Van Gogh: The Immersive Experience has been subject to its fair share of internet chatter. First, it’s one of two nearly identical immersive Van Gogh experiences coming to Boston this year, and the platform selling tickets doesn’t have the best reputation (see: an egregious Better Business Bureau rating). Finally, the “secret location” of the exhibition remained unknown until less than a month before the event’s opening day—which was also postponed.

On Wednesday, September 29 (almost a month after the originally scheduled date of September 1), The Immersive Experience opened to the public at the historic Strand Theatre in Dorchester. The Upham’s Corner mainstay is now hosting floor-to-ceiling iterations of the artist’s most famous works, small galleries that chronicle his life and inspiration, and a virtual reality interactive element.

You’re probably wondering, though, how a multi-thousand-square-foot exhibit could fit into a theater (which usually houses a stage, chairs, and assorted performers). But once you’re inside the truly immersive exhibition, which transports you into the artist’s most famous paintings, it’s hard to even tell you’re in a theater.

First, you travel through long, museum-like hallways that house an introduction to Van Gogh and his work. The space is filled with reproductions of Van Gogh’s pieces—some life-size and some larger-than-life—and informative panels that chronicle his life and inspirations. There’s a canvas print of “Vase with Twelve Sunflowers” and a three-dimensional recreation of his “Bedroom in Arles,” complete with a bed, table, and two chairs. Be on the lookout for a giant bust of Van Gogh’s head, upon which the bright colors of his paintings are projected.

Eventually, you’ll walk down a narrow black-walled hallway and through a set of blackout curtains. There, the immersive part of the exhibition begins.

Four walls of towering two-story screens showcase 360 degrees of Van Gogh’s famous pieces. Crescendoing music and sound effects accompany the 30-minute presentation (which is set on a loop, so you don’t have to worry about missing any of it). Settle in on one of the cushy bean bags, lounge chairs, or plush rugs, and relax while watching the artist’s self-portraits, landscapes, and flowers swirl around you. Stars from “Starry Night Over the Rhone” spin over the floor, crows from “Wheatfield with Crows” fly across the walls, and “Almond Blossom” petals float around the room. 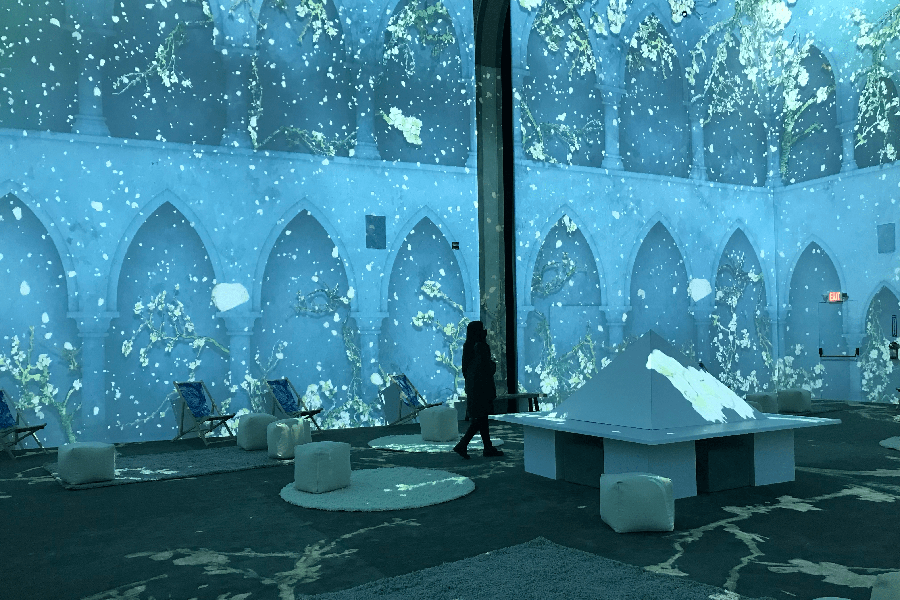 Only if you look up will you see evidence of the Strand Theatre. A gold-leafed archway spans across the center of the man-made immersive room—which has been built on the theater’s floor. To transform the historical space, the Exhibition Hub team (the organization producing the Boston version of the experience, as well as nearly a dozen others across the country) removed the seats in the mezzanine all the way up to the lower balcony, and replaced them with the four-screened structure.

However, they intentionally left the gold arch in plain view, according to Exhibition Hub’s CEO Mario Iacampo. “We wanted to keep the original architecture visible because it adds to the experience, rather than feeling like you’re in an [isolated] box,” he explains. The team also left the elaborate molding uncovered in the lobby and the second floor, increasing the museum-like feel of the space.

Once you exit the immersive experience and (unfortunately) re-enter reality, you’re directed to the second floor. There, Van Gogh coloring pages are available, as is a virtual reality interactive. You have to buy tickets for that separately, but if you’ve got a love for Van Gogh or VR, it’s worth the extra $5. After strapping on the VR headset, you’re transported to the artist’s “Bedroom in Arles.” Taking on the perspective of Van Gogh, you follow him down the stairs (which is the most dizzying part, if you’re prone to motion sickness) and into the French countryside, witnessing the inspiration for his paintings come to life.

Then, as always, you exit through the gift shop.

So if all the hubbub about this thing had you worried, don’t be: you will indeed be getting the immersive experience as promised, and it’s just as Insta-worth as you hoped. And hey, if your weekends are booked this fall, you still have time to visit the OTHER one in December, Imagine: Van Gogh.

My suggestion? Stay in the immersive space for as long as possible. It’s remarkably calming.