Boston Traffic Sucks—Here’s How to Fix It

Our highways are stressful, infuriating, and among the most congested in the world. But everything you thought you knew about traffic—and how to fix it—is wrong. 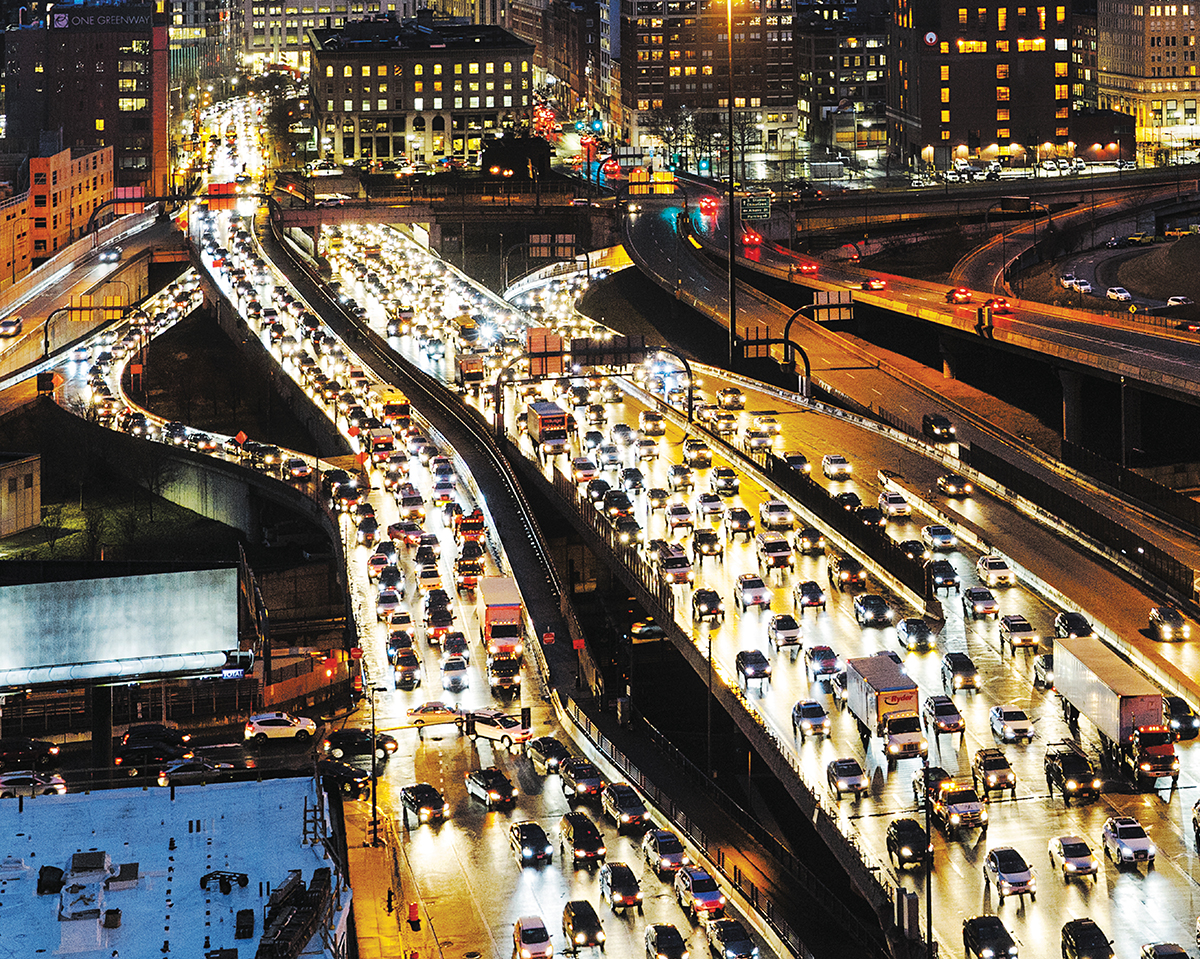 The long road ahead: I-93 South at rush hour. / Photograph by Bob O’Connor

The nightmare begins in your driveway. You live beyond I-495—in southern New Hampshire, Worcester, or near the Cape. You’re there in the outer ’burbs because you wanted a real house with an actual lawn for less than $1,000 per square foot, but now you spend most of your time trying to figure out how to outsmart millions of other Massachusetts commuters. You’re house-rich but time-and-transportation poor, and you’re about to drive your way into the eighth-worst traffic in America.

Even at 5 a.m., every minute counts. To reach your desk in downtown Boston by 9, you have to hit the road before everyone else does. It’s a game you play every morning, waking up before the sprinklers come on, tiptoeing around like a thief in your own house. Not even the dog bothers getting up as you pour your first cup of coffee into the to-go mug, spilling some on the counter. Screw it. You’re up and you’re determined to win the commuting game today. So, let me ask: Do you feel lucky?

Between 5:30 and 6, I-495 has already started filling up as those living closer to the city, jacked up on caffeine and morning radio, sprint out of their suburban enclaves and onto the highways, clogging up the outer exchanges—at I-93 in Andover, the Mass. Pike in Westborough, I-95 in Mansfield. The closer you get to the city, the more headaches you’ll face: By 7, the Southeast Expressway is jammed, and an hour later the Zakim bridge and O’Neill Tunnel combo—an odious 1.9-mile stretch of pavement that soaks up 2.1 million hours of commuters’ time each year—is bumper to bumper.

This is the drama that plays out daily around Boston, where drivers spent an average of about 58 soul-crushing hours stuck in rush-hour traffic in 2016. It turns out we don’t just have one of the worst commutes in the country—we have one of the worst commutes in the world, ranking 18th on the INRIX 2016 Global Traffic Scorecard. It’s a dubious honor, and one that has worse consequences than wasted time. There are health costs—obesity, asthma, sanity, maybe even Alzheimer’s disease—and economic costs, too. In one massive 2013 Boston traffic study, delays along Columbus Avenue in Roxbury, one of the worst corridors in the city, were determined to cumulatively cost drivers more than 174,000 hours per year, and conservatively calculated (at just over $17 per hour) to drain the economy of more than $4 million in revenue.

All of which raises the question: How are we going to fix it? With an estimated 5 percent population increase expected by 2030 in Boston, the painful truth is that no matter how much money we spend improving city infrastructure or the state’s highways, the only thing that will solve Boston’s traffic problems is keeping people off the roads in the first place. And that may be the toughest order of all.

The Zakim bridge and O’Neill Tunnel combo stretches 1.9 miles and soaks up 2.1 million hours of commuters’ time each year.

Drivers spent an average of about 58 hours in rush-hour traffic in 2016.

Motorists cumulatively sit in more than 174,000 hours of delays each year along Columbus Avenue in Roxbury, costing more than $4 million in lost revenue.

In 2016, there were 903 vehicle crashes in Boston requiring Emergency Medical Services.

Prior to World War II, the railroad was king. You took the train to work every morning, and home at night. Urban planning in the 1950s and ’60s, by contrast, centered around one thing: building more federally funded highways for suburbanites. And yet constructing those roadways left city neighborhoods scarred, battered, and fractured. To create what’s currently known as Storrow Drive, for instance, we demolished buildings along the Esplanade, forever severing what is now the city’s most expensive neighborhood from the most delightful Charles River. It’s said that Mrs. Helen Storrow, widow of James and champion of the Esplanade, was appalled that the city was planning to build a “parkway” that would surely desecrate her beloved Back Bay. She eventually lost, and, in a cruel twist, the hideous thing was named after her husband. Around the same time, construction of the Mass. Pike tore holes in dozens of neighborhoods.

The Central Artery, however, was the zenith of 1950s traffic planning. A series of viaducts and tunnels cutting through the city, it gave drivers a bird’s-eye view of downtown, as they sat above the street inhaling gas fumes and frying in the midday sun. Below, the highway’s shadowy underbelly cut off the North End from the rest of the city. Fortunately, all of this was buried underground during the Big Dig, but the city still suffers from the mistakes of the past. “The original Central Artery had something like 11 off-ramps,” explains Ari Ofsevit, a traffic expert who is working on dual master’s degrees in transportation and city planning at MIT. “Now it’s fed by a bunch of gridlocked highways.”

The explosion in midcentury highway building came to a grinding halt with the Inner Belt, a.k.a. I-695, an automotive fantasy of the highest order. What’s now known as Melnea Cass Boulevard would have been part of a highway that cut through almost every cherished area you can imagine—Roxbury, Fenway (in kissing distance of the MFA), Brookline, Cambridge, and Somerville. Only a short piece of the partially elevated thoroughfare was built before the people who had watched the destruction of the West End a few years earlier by the Boston Redevelopment Authority (BRA) finally discovered their activist chops and put a stop to it in the early 1970s. “It’s fair to say that in the ’60s and ’70s, people began to scrutinize the heavy hand of government more,” says Brian Golden, director of the Boston Planning & Development Agency (formerly known as the BRA). “To perform more rigorous cost-benefit analyses, to identify winners and losers, to examine alternatives, and to insist on being heard.”

Still, the damage was done. Highway construction incentivized driving so much that by the early ’70s, rail ridership dropped to the point that the MBTA began abandoning many of its lines. There once was a railway in Northampton that ran into the city, not to mention one from Arlington that could get workers downtown in 18 minutes, among other deserted lines that would have been perfect for today’s commute. Building more roads, in other words, led to a transit “death spiral,” Ofsevit says. “In 1969, rush hour was one hour long. Now it’s six hours long.”

With fewer trains running from the ’burbs to the city, thousands of cars transporting one person each into Longwood, downtown, the universities, and across the river to Cambridge became the new normal, leading to one massive traffic headache. Oh, and don’t forget: While those commuters are at work, they have to park their vehicles somewhere. Considering how valuable land is in Boston, this is the most inefficient way to get humans from point A to point B. All of those cars, whether on the road or in a garage, are taking up too much space—and now there’s nowhere to grow. 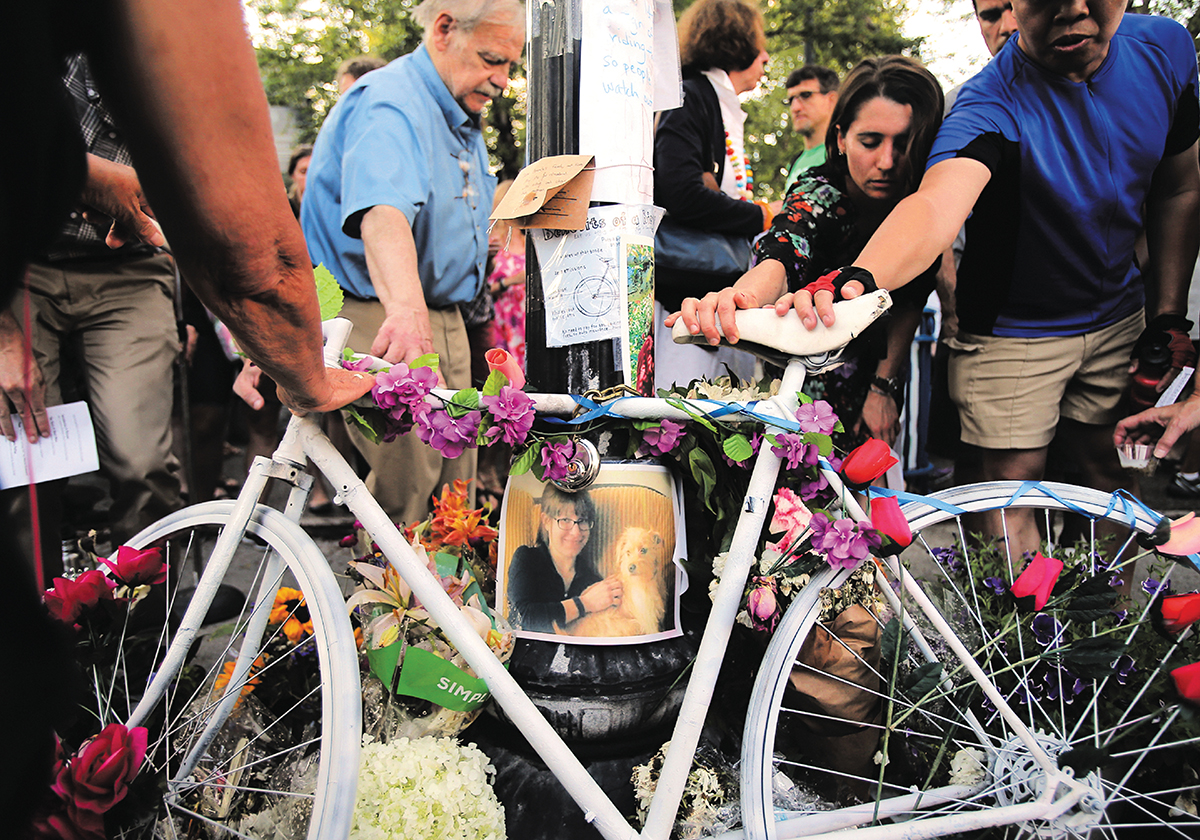 Mourners reach out to touch a “ghost bike” at a vigil for Amanda Phillips, who was struck and killed last summer while bicycling in Inman Square. Mayor Marty Walsh has established Boston’s Vision Zero Task Force to prevent similar fatalities across the river. / Photograph by Lane Turner/Boston Globe/Getty Images

When it comes to traffic, WBZ NewsRadio 1030 reporter Kristen Eck has seen it all, nearly every day, for two decades, usually from 900 feet. Each morning just before 6 a.m., she reports to her company’s Robinson R44 helicopter in Beverly to watch Greater Boston’s heartbreaking traffic ballet from the safety of the air. She monitors everything, looking for problems, especially brake lights.

Typically, she’ll take off and head to Route 128 in Peabody, check for accidents, then follow Route 1 into downtown Boston. At rush hour, little things cause big trouble: a strange-looking animal on the side of the road, stalled cars in the breakdown lane, solar glare. Really, anything can get drivers to tap their brakes, and once that starts, it’s game over.

Even Eck can’t figure it out. “I’ve sat in that [traffic] on my day off and thought, What is this and why is this happening?” she says. Her answer is deeply unsatisfying: “It’s just heavy volume. In some cases widening the road works for a bit, but then it fills up with traffic jams.”

MassDOT Secretary and CEO Stephanie Pollack echoes that sentiment: “MassDOT recognizes that while we may not be able to completely build our way out of congestion, we can ‘smart’ our way out and provide the public with the tools and resources needed to make informed decisions regarding travel routes, modes, and timing.”

What, exactly, does that mean? Well, for one thing, they’re watching us. In a large room featuring a wall of LCD screens, dozens of professionals are monitoring the state’s 3,000 miles of roadway and 7 miles of tunnels at MassDOT’s Highway Operations Center, in South Boston. They see you chatting away on your cell and handing your kids the iPad via 850 security cameras mounted along the state’s highways, and as soon as dispatchers detect an incident, they deploy the appropriate resources. The center also feeds public safety information to 400 variable message boards, keeping you informed about conditions that could affect traffic.

MassDOT communications specialist Patrick Marvin lists the many travel tools the department has created to give people the illusion of control over their commuting destiny. One hundred forty-six “GoTime” signs use Bluetooth data to provide travel times on highways throughout the state, he says, and a new mobile app of the same name allows drivers to get information before hitting the roads. Then there’s MassDOT’s mass511.com, which lets users subscribe to text and email alerts for traffic conditions.

Marvin also notes that MassDOT has transitioned to all-electronic tolling, a $331 million project designed to reduce congestion, increase safety, and decrease pollution. According to MassDOT’s literature, studies indicate Massachusetts’ drivers will save more than 280,000 hours per year. Weekday travel-time data already shows that people commuting eastbound along I-90 from I-495 to South Boston in the morning hours saved as many as 12 minutes during stage two of construction, on average, when compared with the weeks prior to the toll demolition project. Along I-95, meanwhile, MassDOT is building a new lane and shoulder in Needham and Wellesley to accommodate increased traffic.

All of these incremental improvements are cold comfort, however, when you’re stuck in the tar pits. Robert Hibbard, owner of Boston Express delivery service, has made his living shuttling along Route 128 for more than two decades. He doesn’t pull any punches. “Route 128 is still three stinking lanes and they’ve been working on it for years,” Hibbard says. In his opinion, the fix is simple: “Roll back the clock 50 years and make it a five-lane highway.”

That’s not as easy as it sounds. If we’ve learned anything, it’s that adding more capacity only invites more cars. It may seem counterintuitive, yet consider Houston’s infamous Katy Freeway and its whopping 26 traffic lanes. If that sounds like heaven—room for everyone—consider that a few years after this mass of pavement was built, it clogged up worse than ever. Which follows the old adage: If you build it, they will come.