Anti-ICE Protesters Were Arrested Outside the Northeastern President’s Home

They called on Joseph Aoun to sever a contract with the agency. 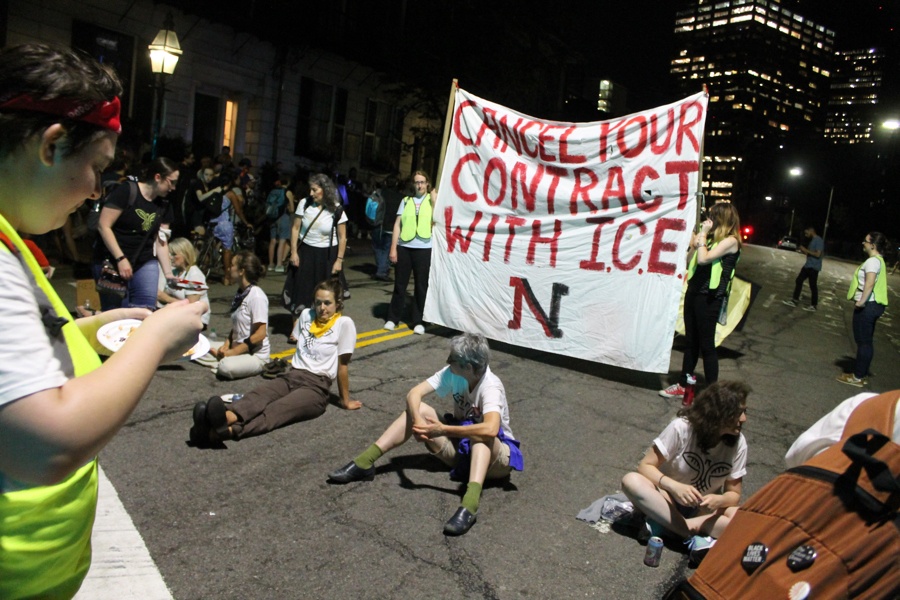 A dozen protesters were arrested outside the home of Northeastern President Joseph Aoun on Tuesday night after a rally calling on the university to sever a contract with ICE, the agency responsible for carrying out Trump’s immigration policy.

Movimiento Cosecha, an immigrant advocacy nonprofit that organized the protest, says 12 people were arrested after refusing to leave the street outside the Aoun’s Beacon Street home. A Boston Police spokesman says 11 protesters were arrested without incident, and described them as “cooperative.” Each are charged with disturbing the peace.

Earlier, hundreds of students and activists had marched there from the Northeastern campus, part of a month’s worth of protest against the university’s multi-million dollar deal to conduct research for Immigration and Customs Enforcement.

“We are fighting to #AbolishICE in Boston,” the group wrote on Twitter, using the hashtag #WeWontBeComplicit. “How? By stopping all research, tech, and funding that goes to ICE.”

Northeastern has defended that contract, noting that it does not involve immigration and is instead focused on tracking “weapons of mass destruction.” Activists have argued that collaborating in any way with ICE is “irresponsible and immoral.” A petition to that effect has more than 2,100 signatures.

“Peaceful protests are the hallmark of a great university. We celebrate the vigorous exchange of competing ideas, which is the basis of higher learning,” Renata Nyul, Northeastern’s vice president for communications, said in a statement, adding, “Our commitment to academic freedom goes beyond protecting what professors say; it also means allowing faculty members to freely pursue research funding in their fields of expertise. Efforts to restrict which federal agencies a faculty member can approach for research funding are antithetical to academic freedom. We hope everyone can agree to support freedom of academic inquiry—most importantly members of our own faculty.”

The protest came the same day as anti-ICE demonstrations in New York at an Amazon store and the offices for Microsoft and Salesforce, as well as at the Comcast Center in Philadelphia.

Out here on the streets to tell @Northeastern to cancel their multi million dollar contract with ICE. #WeWontBeComplicit #AbolishICE pic.twitter.com/lpfKIek1KO

12 arrested in Boston after a 300+ person march, and dozens continued to occupy the streets outside @PresidentAoun’s home demanding he decline the multimillion dollar research grant from ICE. #WeWontBeComplicit #AbolishICE pic.twitter.com/alWVqesRup