Face-Off: Who Won It Best?

Robert Kraft and John Henry both boast multiple championships. But with the Pats season in full swing and the Sox heading into the all-important Winter Baseball Meetings this month, which billionaire owner reigns supreme? 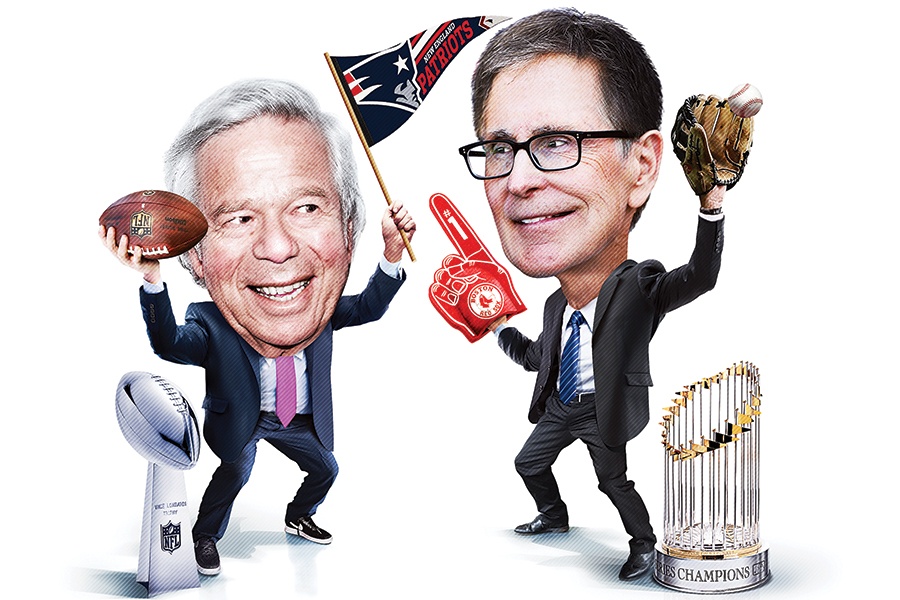 HISTORY
Before Kraft bought the Patriots in 1994, they lost so often they were derided as “the Patsies.” Then he hired football wizard Bill Belichick, drafted future GOAT Tom Brady, and brought home five Super Bowl rings in eight appearances—plus 17 AFC East titles and the NFL’s best-ever regular season (16–0) in 2007.

SCANDALS
Good as the Pats have been under Kraft, they’ve often been mired in scandals that continue to harm their reputation, including 2007’s cloak-and-dagger drama, Spygate; 2015’s caper turned physics lesson, Deflategate; and the Aaron Hernandez saga.

SOCCER
When it comes to his other team, the New England Revolution soccer club, Kraft made sports history by helping to bring Major League Soccer into existence in 1996. Even though his Revs have yet to win a championship, they have played (and lost) in the MLS Cup final five times.

HISTORY
Before Henry bought the Red Sox in 2002, they had suffered more than 80 years of grief, including the torturous 1986 World Series. Henry’s unsentimental approach has yielded four World Series wins in four tries—plus domination of the Yankees-Sox rivalry and a franchise-record-setting 108-win season this year.

STADIUM
Fenway Park was such a relic that former Mayor Tom Menino once endorsed building a new ballpark. Instead, Henry’s $285 million makeover yielded Green Monster seats, a kid-friendly concourse, and upscale concessions that have given Fenway a new future. It’s a rejuvenation—but it’ll cost you plenty to go.

SCANDALS
Henry is a visionary, but he’s still had a few managerial missteps that led, for instance, to GM Theo Epstein temporarily quitting while wearing a gorilla suit, and to manager Terry Francona’s sudden ouster following the team’s infamous “chicken-and-beer” collapse in 2011.

SOCCER
When it comes to his other team, Liverpool FC, Henry and Fenway Sports Group rescued the Premier League titans in 2010. LFC has scored only one trophy since—the League Cup in 2012—but played in this summer’s Champions League final, making Henry one of the world’s top soccer-team owners.

REPUTATION
Henry may hide his generosity behind a closely guarded persona, but his civic pride expressed through his Sox and Boston Globe makes us all feel like MVPs.