Apple Watches and Fitbits were apparently very concerned about us. 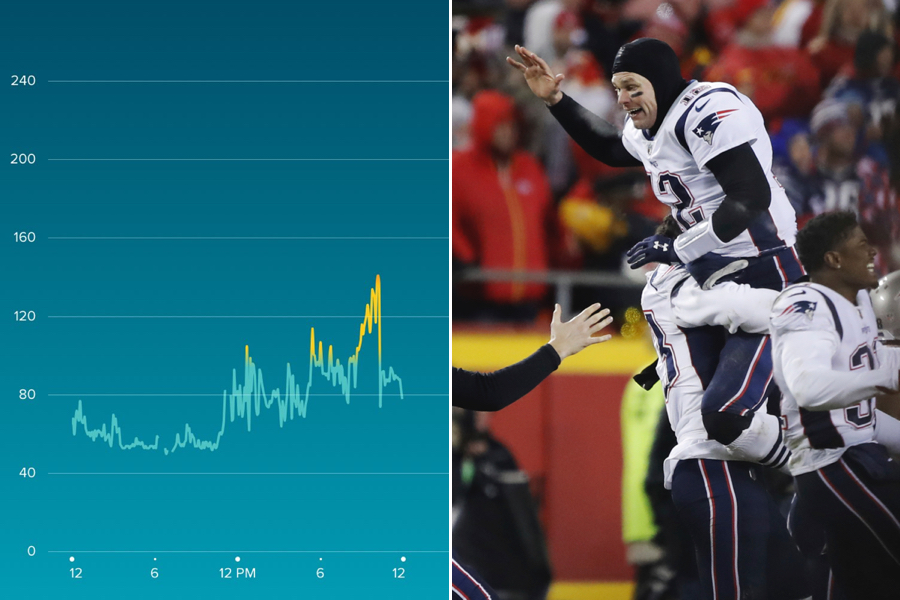 Here in the future, it’s pretty good to be a Patriots fan. The haters and the doubters were proven wrong, Brady and Belichick have reaffirmed their legacy as the greatest mind meld in history, and another shot at a Super Bowl ring is just around the corner.

But let’s be honest: The final minutes of the AFC Championship game with the top-seeded Kansas City Chiefs were a lot, emotionally speaking. Fans around the country were screaming in their living rooms and tweeting feverishly as the game went into overtime.

And hearts were thumping in chests. We don’t have to take fans’ word for it: In a perfect illustration of just how stressful Sunday night’s game was, viewers of last night’s game have been posting screenshots of their heart rates during those last perilous minutes, as captured in real time by their Fitbits, Apple Watches, and other wearable devices.

This was my heart rate during the the Patriots game. FitBit seems to think I was doing some serious cardio. pic.twitter.com/7S3zFqvZPE

Zach Fournier, a 21-year-old student at Assumption College, says his FitBit captured the moment, right around the first overtime third down, that his heart rate rocketed up into cardio territory at around 140 beats per minute—the same rate it typically records when he does high-intensity interval training.

“Earlier in the day I was helping push my friend’s car out of the snow, and it didn’t even spike as high as it did during the game,” says Fournier, who posted a photo of his Fitbit results on Twitter. “It’s pretty funny.”

Not that it surprises him, as a lifelong fan with a lot of investment in this team. “Especially when the ball is in Tom’s hands and he has a chance of making a play, you have confidence, but you’re nervous at the same time. It’s a feeling I’m used to,” he says. “Clearly it doesn’t show any signs of letting up, as far as my heart is concerned.”

As things came down to the wire, says Dylan O’Mahony, 39, of Acton, “I just kind of realized as I was sitting there I was almost having a tough time breathing. So I brought up the heart rate app on the watch and saw it was like three times my resting heart rate.”

It speaks volumes about the #nfl #afcchampionship game when watching the Patriots battle to another Super Bowl gets my heart rate up higher than shoveling snow earlier in the day! 🏟 https://t.co/EzUWa1FbCQ pic.twitter.com/hhDiAjhoXK

He’s fine now, though. “Things went back to normal once the game was over,” Dylan says.

Another viewer tweeted a screenshot of an alert from his Apple Watch, which noticed that his heart rate had spiked, even though he hadn’t moved for several minutes, and feared he might be in trouble. He wasn’t. “I’M WATCHING THE GAME, DUDE!” he tweeted.

Fitbit, the company, has recognized the impact big games have on wearers in the past. Back in 2015, when the Patriots played the Seahawks at Super Bowl LXIX, it says users’ heart rates climbed an average of 10 beats per minute during big plays.

So just how stressful was the AFC Championship game? Plenty of fans wanted the world to know, so they took to social media to share, offering up some biometric proof of the tortures of fandom.

My Fitbit said that my heart rate was around 128 beats per minute during the end of the #Patriots game tonight. I was basically doing cardio sitting down being stressed.

@Patriots you tell how this game went by following my heart rate… pic.twitter.com/FJd19ePlOw

#Patriots got my heart rate up pic.twitter.com/J7Gc168vUG

Thanks to my #AppleWatch I know my heart rate went from 55 to 153 and into afib during the second half of the @Patriots game! Back to a nice steady 60 bpm now. Thanks @RBrex34 #GBR