Trump Has Thoughts on the Patriots and Curt Schilling

He's got Boston sports on the brain. 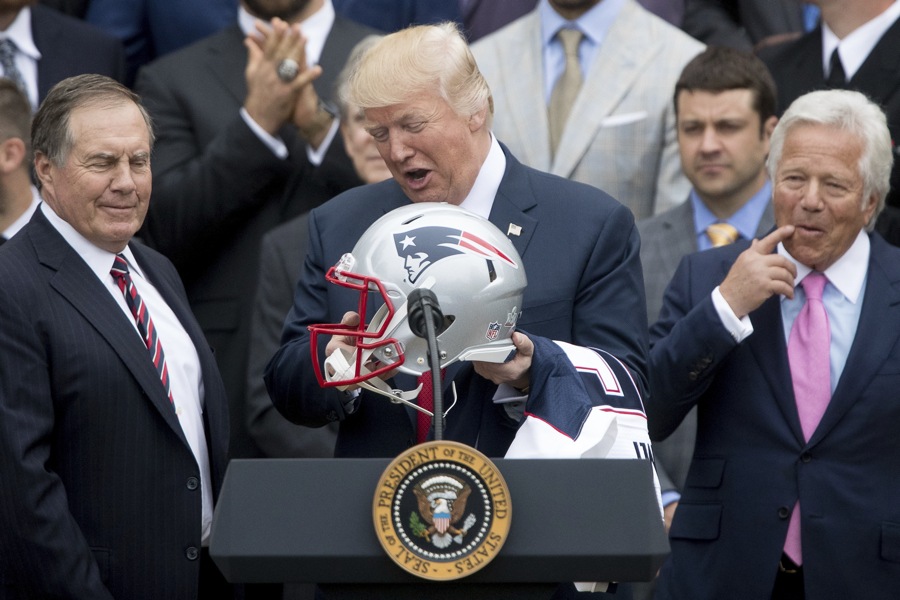 The president has some thoughts on Boston sports right now, and he’s sharing them to his 58 million followers on Twitter.

First, Trump congratulated the Patriots on their win over the Kansas City Chiefs at the AFC Championship, which will send the team to the Super Bowl. In a tweet, he singled out owner Robert Kraft, coach Bill Belichick, and quarterback Tom Brady, all of whom have links to Trump that are well known. Trump notably did not have anything to say about the Los Angeles Rams, the other team that earned a ticket to the Super Bowl yesterday.

Congratulations to Bob Kraft, Bill Belichick, Tom Brady and the entire New England Patriots team on a great game and season. Will be a fantastic Super Bowl!

Later, Trump had another name in the sports world he wanted to boost with the presidential brand: Curt Schilling.

The legendary Red Sox pitcher and World Series hero has so far not been voted into the Baseball Hall of Fame—a fact many have attributed to his erratic and confrontational conservative persona. Schilling was fired by ESPN in 2017 after mocking transgender people with a crude meme, and a tweet about lynching journalists in 2017 prompted the Globe‘s Dan Shaughnessy, who has a say in picking Hall of Famers, to announce he could no longer stomach voting for him (voters are supposed to weigh a players’ “character” as well as their stats)

Schilling has chalked his exclusion up to anti-Trump bias, and said he believes if he had shared a tweet reading “Lynch Trump” instead of the one about killing journalists, he would be in the Hall of Fame already.

Schilling was a guest on the Fox News show Life, Liberty & Levin on Sunday night, which appears to be what caught the president’s attention.

“Curt Schilling deserves to be in the Baseball Hall of Fame. Great record, especially when under pressure and when it mattered most.” Trump wrote on Twitter, in a message that tagged the Fox show’s account on the site. “Do what everyone in Baseball knows is right!”

Curt Schilling deserves to be in the Baseball Hall of Fame. Great record, especially when under pressure and when it mattered most. Do what everyone in Baseball knows is right! @marklevinshow

Hall of Fame ballots were due three weeks ago, on December 31. Schilling will need to show up on 75 percent of them to be inducted; last year his total was 51.2 percent.