Mass. Officials: Be on the Lookout for the Evil Spotted Lanternfly

An invasive species has been hitching rides on potted plants this season. 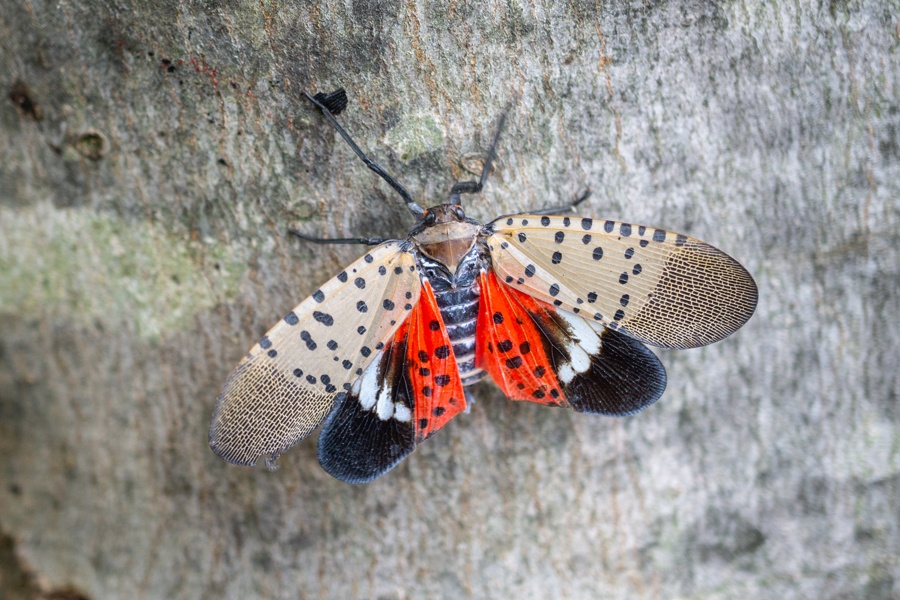 It eats trees and shrubs, it can strike a major blow to fruit crops, it’s big and weird, and for the first time ever, it’s been spotted in Massachusetts.

Folks, meet your new winged enemy: The spotted lanternfly, an evil and destructive invasive species from China that to the alarm of state officials has been discovered inside a Boston home.

According to an announcement from the state’s Department of Agricultural Resources, experts have confirmed that a bug carcass found in a Bostonian’s poinsettia in December was in fact one of the inch-long multicolored insects. It is believed to have hitched a ride here from a poinsettia grower in Pennsylvania, where the bugs arrived from Asia in 2014 and have become an escalating, multi-million dollar pain in the ass.

Officials are now urging anyone who bought a potted plant to check them for the bugs, which have beige spotted wings while sitting still but reveal a second set of red-and-white wings when they hop around.

“Early detection plays an important role in the protection of the economic and ecological resources of our state from invasive species,” MDAR Commissioner John Lebeaux said in a statement. “We ask all residents who have received potted plants this past December to help us protect Massachusetts’ environment and agricultural industries by checking for and reporting signs of spotted lanternfly.”

As there have not been any more sightings, officials don’t believe we have a full-on spotted lanternfly problem in the state—at least, not that we know of just yet.

More information about how to identify them, as well as a form to fill out if you spot one of your own, can be found here.

Why should we be concerned? The bugs feast on sap from trees, shrubs, and vines, spray “sooty mold” everywhere and according to the announcement can “impact a broad range of agricultural commodities, including apples, peaches, grapes/wine, maple syrup, as well as the ornamental nursery industry,” the announcement reads. The New York Times reported last summer that scientists believe a nationwide outbreak of the latnernfly from the parts of eastern Pennsylvania where it’s been quarantined “would be something of a disaster.”

So if you like local wine and cider and syrup, and I know that you do, get to inspecting your plants.

Massachusetts Dept of Ag. Resources is urging residents to be on the lookout for the #invasive spotted lanternfly after a dead adult was found in a Boston home.

It appears to have been unintentionally introduced in December via a shipment of poinsettias.https://t.co/MBXvKA05Xl