The Strange Case of the Martha’s Vineyard Confederate Plaque

The NAACP wants it removed. What was it doing there in the first place? 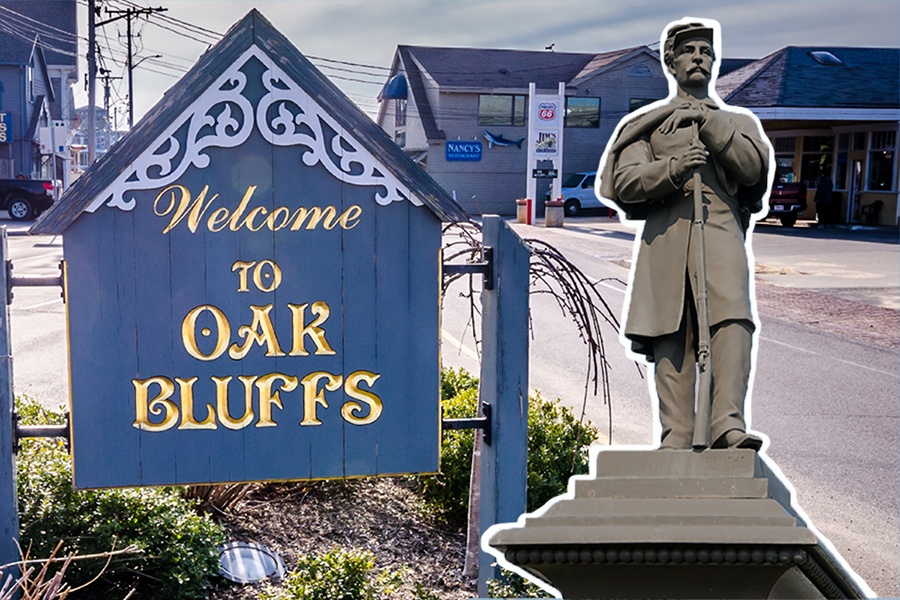 Of all the Confederacy-celebrating monuments in the country, the one found in the Martha’s Vineyard community of Oak Bluffs has got to be one of the strangest.

Didn’t know Martha’s Vineyard had a Confederate monument? Well, technically speaking, it doesn’t. It has a Confederate plaque, installed at the foot of a statue of a Union soldier. It’s weird. It’s complicated. And it’s back in the spotlight after calls from the NAACP to take it down.

It’s an especially unlikely site for such a thing. Oak Bluffs has a long legacy as an African-American vacation destination, and the town’s Inkwell Beach in particular remains a site not just for sun-splashed getaways but for activism and healing.

The story of how an ode to the Confederacy ended up in a place like that begins a few years after the Civil War. In the late 1800s, a man named Charles Strahan, who had fought in defense of slavery for the Confederacy, decided to head north after the war in search of a fresh start in Massachusetts. After an apparently chilly reception from the Vineyard community, Strahan, then the owner of the Martha’s Vineyard Herald, raised money to build a seven-foot-tall statue of a northern soldier, dedicated to the local Union veterans.

When it was erected in 1891, Strahan said he hoped the statue would be seen as a gesture of good will, and that one day his Union-allied neighbors could find it in their hearts to offer “more kindness” to his “old comrades” from the Confederacy and add a plaque to it in their honor—there were, as some might say, fine people on both sides.

“In the years between about 1913 and the mid 1920s, there were a lot of big ceremonies of reconciliation—old white guys in Confederate uniforms and old white guys in Union uniforms shaking hands with each other and declaring that the war had all been a tragic misunderstanding,” says Bow Van Riper, research librarian at the Martha’s Vineyard Museum. “The thing that makes it problematic for some people—some historians, some members of the African American community—is that declaring as they did that the war was just a tragic misunderstanding between brothers erases the meaning that the war was given by Lincoln, which was that the war was a moral campaign against a monstrous evil, which is to say, slavery.”

It took more than 30 years to see Strahan’s dream realized, but in 1925, it happened: A local Union veterans group agreed to add an inscription with some kind words for the Confederacy on the statue.

And that’s how Oak Bluffs ended up with a stone plaque “dedicated by the Union veterans of the Civil War, in honor of the Confederate soldiers.” It proclaimed, “The chasm is closed.” The Union- and Confederacy-honoring monument is still held up as an example of a divided America coming together to heal its wounds.

Nearly a century later, though, the NAACP isn’t buying it. Last weekend, the members of the organization’s local branch voted unanimously to call on the Board of Selectmen to tear down the plaque, as well as a marker installed near the statue to explain its feel-good backstory, both of which the group sees as a bunch of offensive, history-whitewashing baloney.

“The idea of honoring someone and his ilk who took a bullet for the fight to preserve the enslavement of me and my people—and a sizable group that brings literally millions to Martha’s Vineyard every July and August—is downright egregious,” says Clennon King, a Boston historian and filmmaker who has been leading the charge on removing the plaques. “That they can tolerate genuflecting to a group of soldiers who fought to ensure the enslavement of African-Americans is just beyond me.”

Admittedly, this case is a little more nuanced than your typical Robert E. Lee statue or Confederate flag—while those are clear, unambiguous symbols of reverence for the Confederacy, this one is murkier. But King says we should think of it this way: Would Oak Bluffs support a similar statue honoring both American World War II veterans and Nazis? Or a monument to victims of the Armenian Genocide that also gave a nod to its perpetrators? Of course not. So why is this OK?

The NAACP is slated to make the case to selectmen on March 26, asking for the plaques to be moved to a museum. Gail Barmakian, the board’s chairman, confirms the issue is on Tuesday night’s agenda, but couldn’t tell me more about what might come out of the meeting. “We need to all go into this with open minds,” she says.

Recently, though, Massachusetts has shown it’s willing to topple monuments to Confederates. In 2017, officials removed a large stone tablet on George’s Island installed by the Daughters of the Confederacy that paid tribute to Confederate prisoners of war who died there. It was thought to be the only explicit Confederate monument in the state.

On the Vineyard, though, King says he’s already gotten some pushback. You can get a taste of what that looks like in the comments sections of articles in local papers. “Yes! Let’s erase history,” reads one of them, dripping with sarcasm. Another commenter pointed to King’s status as an out-of-towner (King does not live on the Vineyard but has been vacationing there for more than a decade). “No mere ‘frequent visitor to the Island’ has the right to advocate for [the plaque’s] removal solely on the basis of his race,” this person’s message reads, adding, “If the plaque so offends Mr. King, I would respectfully remind him that he has many other choices of vacation destinations.”

But comment boards are never the totality of opinion on a subject, and King says he hopes the community will take a fresh look at the century-old gentlemen’s agreement, and consider the concerns of descendants of slaves. And he hopes more vacationers like him will also speak up about this ode to Confederates in their midst.

“There’s this notion that ‘We came here to relax,'” he says. “There is no vacation from the struggle.”

Update: Officials in Oak Bluffs have decided to punt on the Confederacy-saluting plaque, for now. The Martha’s Vineyard Times reports that the local board of selectmen heard from a passionate crowd—arguing both for and against the plaque—at its meeting on Tuesday but ultimately decided to table the issue. They may vote next month to hold another public hearing, and it’s possible the plaque’s fate could be put to a vote at a special town meeting.