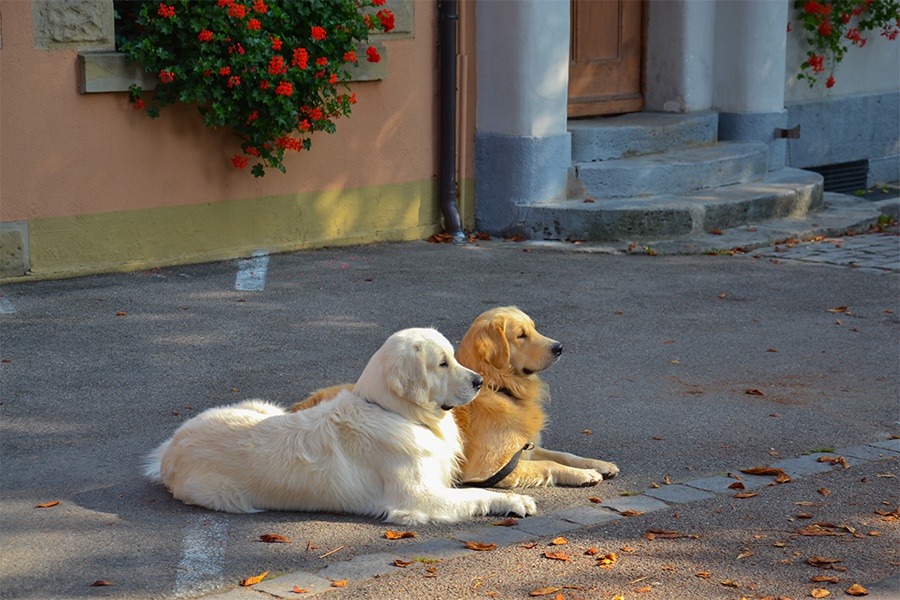 After a generous helping of Easter ham and a steady stream of pastel jelly beans from an all-too-convenient egg-shaped dish, it’s a good idea to take a little stroll to work off the day.

Just follow the example of these two best friends. A pair of gorgeous golden retrievers was spotted strolling down Main Street in Tewksbury yesterday, seemingly joined at the hip.

And, as is usual when out for a walk with a friend, a police car slowly patrolling behind them kept the pair safe, making sure no speedsters could interrupt their Easter jaunt.

Two friends out for an Easter stroll down Main st,Tewksbury.
Heading to Dandi-Lyons for a doggie ice cream!Great job by Tewksbury Police Dept! pic.twitter.com/zSLeYg3OGI

Jim Lyons, chairman of the Massachusetts Republican Party, luckily captured the spectacle on video as soon as he saw it.

“It was funny as heck,” Lyons told the Boston Globe. “They just kind of paraded down the middle of the street like they were supposed to be doing it—and the policeman was following behind the dogs to make sure no one was getting into the dogs’ way.”

Lyons said there was a line of cars down the street backed up by the Sunday processional, making the whole scene look very ceremonial. It helped that the dogs, nearly identical besides a few shades of golden brown, stayed perfectly in sync the whole way, grinning at the beautiful day.

“Heading to Dandi-Lyons for a doggie ice cream!” Lyons tweeted with the video.

He had been leaving the ice cream shop, which he owns, when he saw the dogs.

John Voto, Tewksbury deputy police chief, said that the officer behind them tried to escort them home, but they veered off the road and into a swamp after about half a mile.

Thankfully, on a day made to celebrate miraculous returns, the dogs returned home after police contacted their owner.