Excel Academy Charter High School in East Boston is ramping up security after a woman walked in and filmed a display recognizing Arab American Heritage Month. 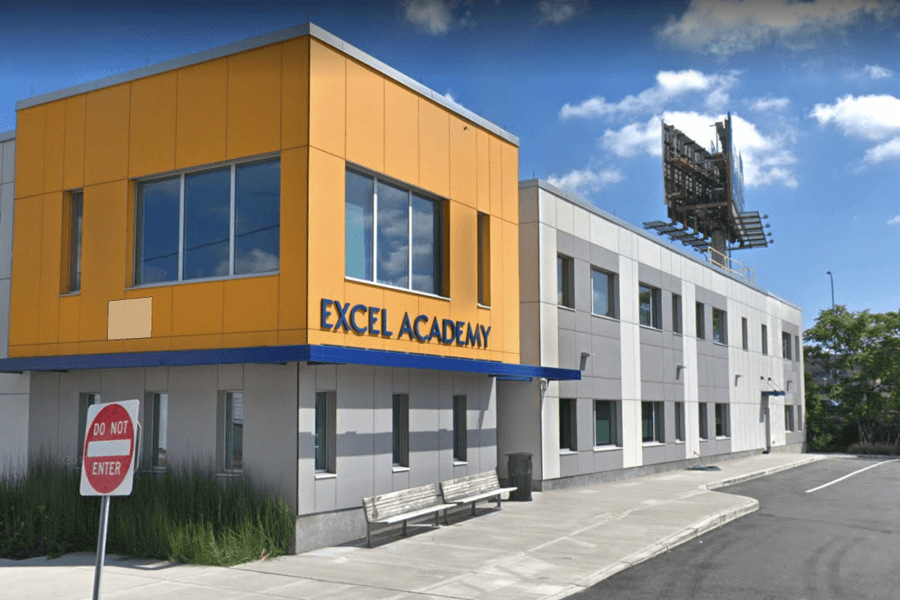 A high school in East Boston is updating security and reaffirming support for its diverse student body after the spread of a disturbing video filmed inside its lobby last month.

The video, posted online April 24, was critical of a display at the Excel Academy Charter High School recognizing Arab American Heritage Month, and has since drawn condemnation from city and state officials. Boston Police also say the incident is under investigation and has been referred to the department’s Civil Rights Unit.

Published by a Facebook user who identifies as “Stiletto,” the video shows a woman walking into the lobby of the school and expressing dismay about photos and signs that had been set up to portray prominent people with Arab heritage.

@universalhub pls RT here is the whole video by the woman irate over Arab Heritage Month at Excel Academy. Why was she never questioned? Why was she let in? Where is security? Why is she so ignorant? pic.twitter.com/BzS8zDwnGB

The clip, which gained wider attention this week, shows the woman recorded herself approaching and entering the school, identifying herself to a school employee as “a concerned grandparent” and then explaining that she planned to record footage of the display. The school employee can be heard in the video telling her she is allowed to do so, as long as she doesn’t film students. The woman then proceeds to the display on a glass wall, which includes pictures of Apple’s Steve Jobs, whose biological father was Syrian, actor Rami Malek, who is the son of Egyptian immigrants, and Rashida Tlaib, the first Palestinian-American elected to Congress.

“We’re in America, man. I don’t like this shit,” the woman says, narrating as the camera pans across the photos. “And there she is, the one that wants to impeach the motherfucker,” she says, referring to Tlaib and the Congresswoman’s support for impeaching President Trump.

“I’m just getting sick to my stomach being here,” she continues. “This is your taxpayer money, where it’s goin.'”

In the caption for the video, she writes, “WTF! Parents, grandparents, tax payers , American citizens- we must be the ones to expose this colonization of our country.”

“Stiletto,” who also goes by the name “Stiletto Dee,” did not respond to multiple requests for comment.

Excel Academy CEO Owen Stearns says that since the incident the school has taken steps to enhance security, including adding new locks to its interior doors, which would prevent visitors from entering the building without clearance from its front office.

“At Excel, we thrive by recognizing and celebrating the diversity of our community,” Stearns said in a statement. “Excel Academy condemns any action or speech that disparages the dignity of any person based on their culture, race, identity, national origin, sexual orientation, religion, immigration status, or other aspect of their identity.”

Boston City Councilor Lydia Edwards, whose district includes Eastie, said in a phone interview she was troubled by the woman’s actions. “Her anger towards it was concerning,” Edwards says. “The fact that she got access with a camera to record in the school is concerning. And so it was really a safety issue initially for me. She has no children in there that I know of, so she had no business in that school. At the end of the day I think right now this is a learning moment and it’s also a unifying moment for the community of East Boston.”

On Thursday evening, Edwards and fellow Eastie representatives Sen. Joe Boncore and Rep. Adrian Madaro responded to the incident with a joint statement in support of Arab-American Bostonians:

Boston’s schools prepare students of our diverse city to be members of a global and welcoming society. Arab-Americans are celebrated members of our communities, whose contributions have enriched our neighborhoods. We applaud Excel Academy for honoring Arab-American Heritage Month during the month of April. Given recent concerns about the safety and wellbeing of students, and Arab-American students in particular, we have contacted school staff to ensure that proper security measures are in place. We firmly reject racism directed against any members of our community, particularly as they celebrate participation and unprecedented representation in government.

“Stiletto” addressed the backlash to the video in a Facebook post on Wednesday, saying she filmed it because she was upset about “the indoctrination of our schools” and the photo of Tlaib. “I feel they shouldn’t teach our youth to glorify a person who threatens to impeach a sitting president,” she wrote, adding, “I have nothing but love & respect for people.” 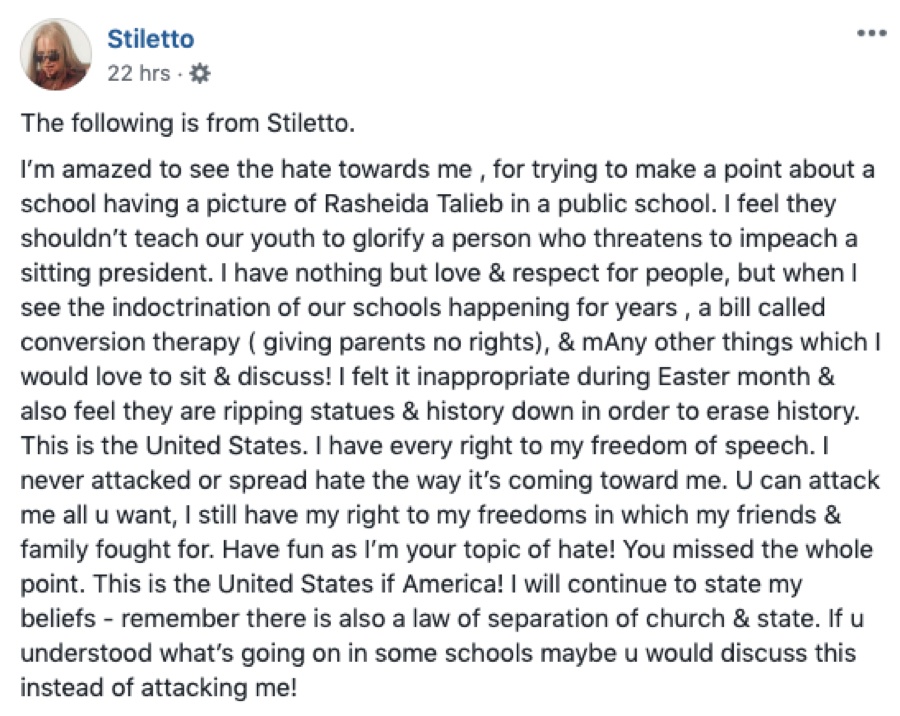 In other Facebook posts, the woman has shared messages critical of Islam. A few days after her trip to the charter school, she posted a recording of herself singing a song about “sharia law,” along with a photo of the illuminated cross in Orient Heights. In one video from last month, which she appears to have filmed, another woman can be seen declaring that Islam is “not a religion” and that, “We cannot allow this horrific ideology in our public schools.”