Complete with food, beer, and a live concert featuring "some of today’s biggest acts in music." 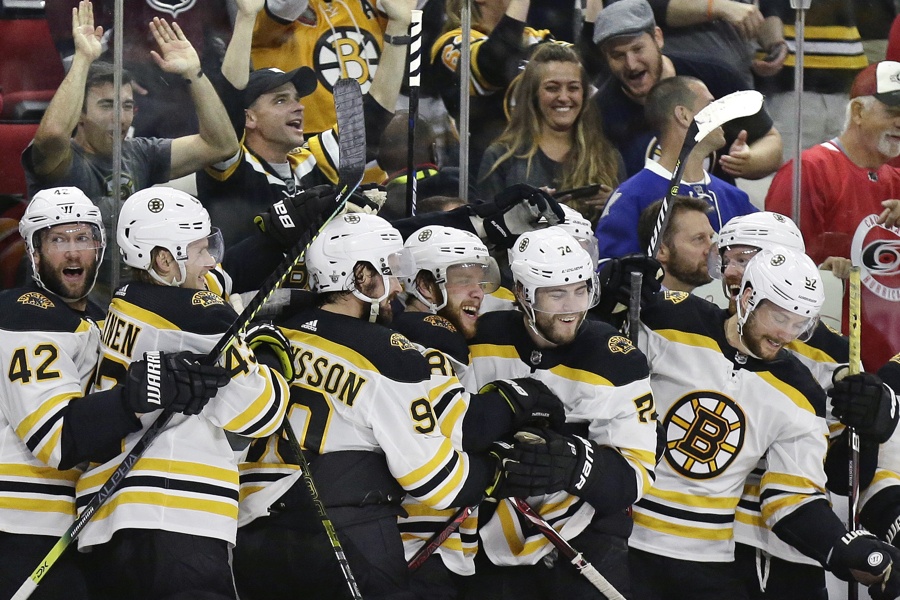 FILE – In this May 16, 2019, file photo, Boston Bruins players celebrate during the closing moments in Game 4 of the team’s NHL hockey Stanley Cup Eastern Conference final victory over against the Carolina Hurricanes in Raleigh, N.C. The Bruins will face the St. Louis Blues in Game 1 of the Stanley Cup Final on Monday, May 27, 2019, in Boston. (AP Photo/Gerry Broome, File)

Don’t worry if you didn’t score a ticket to the Garden to see the Bruins at Monday’s Stanley Cup Game 1. You can still watch the game surrounded by thousands of your closest friends in B’s gear at City Hall Plaza.

The NHL is teaming up with the City of Boston to throw a free outdoor viewing party on the plaza, complete with live music, beer, wine, and food trucks galore. You can come as early as 4:30 p.m., but the music doesn’t start until 6 p.m. The puck drops at 8 p.m.

Is there a better way to celebrate Memorial Day and ring in summer than by watching huge men duke it out on ice with an ice-cold brew in hand? And with Game 1 tickets reselling at around $600 (at the lowest!), City Hall Plaza looks like a winning alternative.

The musical performers haven’t been revealed yet, so keep an eye out on the NHL’s social media pages for the announcement over the weekend. Don’t worry — the press release assures fans that the concert “will include some of today’s biggest acts in music.”

Nothing about the party says that Blues fans can’t join in, but St. Louis transplants stopping by might want to keep a low profile. There’s no telling what a frenzied Boston crowd hungry for their third championship this year will do when they see a blue and gold jersey in their midst.

Temperatures are heating up into the low 80’s over the weekend, but al fresco fans will enjoy a pleasant evening in the high 60’s Monday. So grab some buds, grab a Bud, and sit back to watch Boston hopefully bring home its first title since February.