Hate to see it. 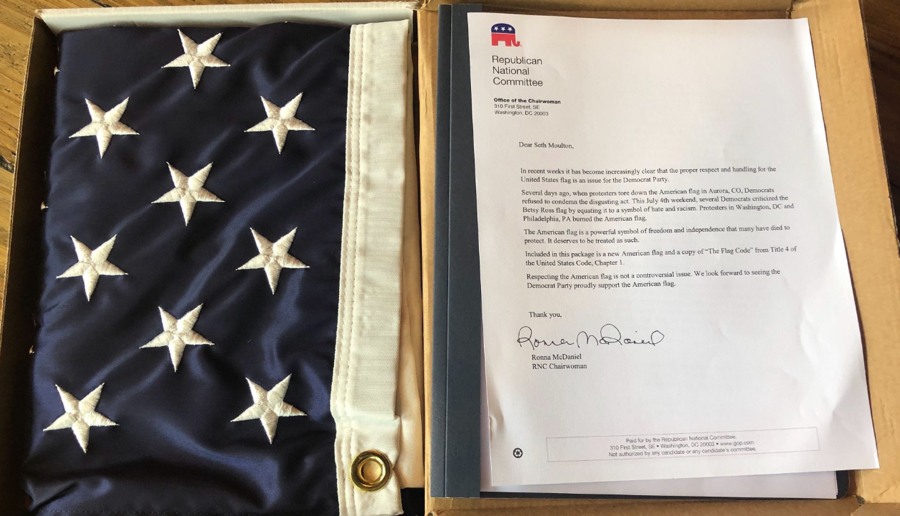 The crack team over at the Republican National Committee hatched a downright genius plan this week. As a snarky reminder from some real patriots about respecting the stars and stripes, the idea was to send Massachusetts Congressman Seth Moulton, a veteran and Democrat running for president, a folded-up American flag and—get his ass—a copy of the U.S. Flag Code.

In a letter to the congressman, RNC chairwoman Ronna McDaniel wrote that she was disappointed in Democrats for not answering her call to condemn protesters for mistreating flags, and also made reference to Nike nixing its Betsy Ross flag sneakers amid backlash to the design. “In recent weeks it has become increasingly clear that the proper respect and handling for the United States flag is an issue for the Democrat [sic] party,” she wrote, adding, “The American flag is a powerful symbol of freedom and independence that many have died to protect. It deserves to be treated as such.”

As Moulton gleefully pointed out on Twitter after receiving his flag lecture in the mail, there was a major oversight from the office of McDaniel, the big time flag-respecter: “Thank you for mailing me the flag and a copy of the flag code,” he wrote. “Next time, show some respect and fold it properly.”

Hey, @GOP thank you for mailing me the flag and a copy of the flag code.

Next time, show some respect and fold it properly. pic.twitter.com/7r2vp3fZ84

While not in the text of the Flag Code itself, according to custom the flag is supposed to be folded up in a triangle. The American Legion even has a breakdown of what each turn in the flag-folding process is meant to symbolize. The flag Moulton received was folded up in a rectangle.

In a follow-up, the GOP’s official Twitter account pinned the blame for the improperly folded flag on the House of Representatives, which is where the party says it bought it. For what it’s worth, behind-the-scenes video does appear to show that official flags available through the Capitol Flag Program are folded up like rectangles and sold in boxes.

You may want to call your office then, Congressman. We bought it from the House of Representatives.

The Flag Code is, of course, violated over and over again in this country, including by institutions of American patriotism such as the NFL, which routinely carries flags horizontally and so on.

But I guess if you’re a high-ranking political figure and making a big flag-related statement to a sitting congressman, you gotta be extra careful about crossing your T’s here. For example, you’d never want to be seen in public using the flag “as wearing apparel,” which according to the Flag Code is forbidden.

.@GOPChairwoman recently sent us the US Flag Code out of “concern” about proper respect for the flag.

She may want to reread Section 8 that forbids disrespectful use of the flag and includes, “The flag should never be used as wearing apparel.”