A father and his two sons went missing after setting off from Plymouth on Sunday morning. 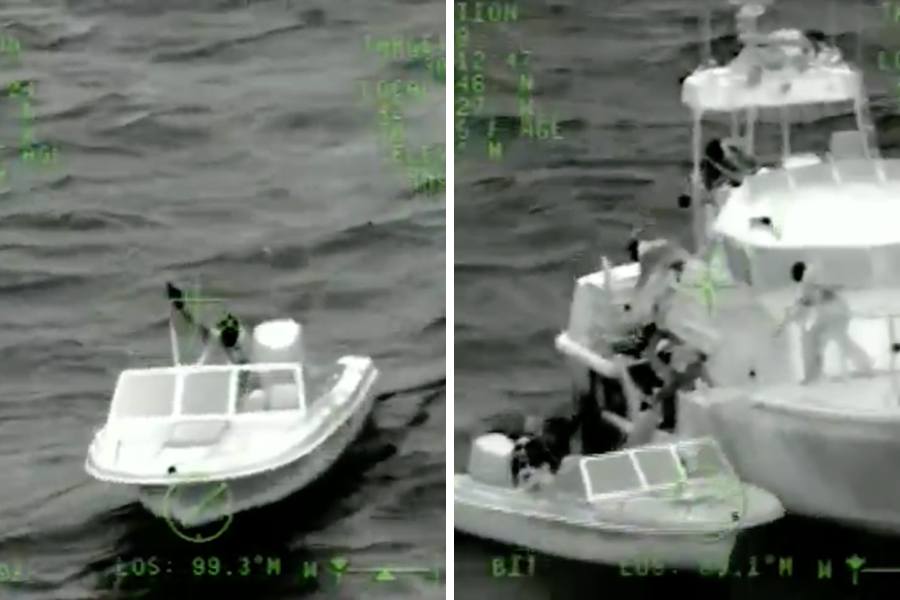 A father and his two sons are safe and sound thanks to the Coast Guard, which rescued them off the coast of Scituate at around 3:30 a.m. Monday morning. The trio had gone missing after leaving for a boating trip out of Plymouth on Sunday morning.

And now, thanks to video footage released Monday morning, we can see the mission in action.

In a somewhat grainy black-and-white clip posted online by the Coast Guard, the father, identified as 39-year-old Mike Ryan, can be seen waving to rescuers from behind the wheel of his 20-foot boat, as waves churn. The clip then jumps to a 47-foot Motor Lifeboat pulling up next to the boat, as a Coast Guard rescuer reels it in with with a rope. It then shows Ryan and his children, who are 5 and 6 years old, climbing aboard the vessel before the disabled boat—which broke down somewhere between Provincetown and Plymouth—could be towed home. They were not injured, the Coast Guard says.

The Coast Guard says it launched a rescue mission after receiving a report at around 11 p.m. that the family had left Plymouth on a trip to Provincetown at 10 a.m. in a 20-foot long Wellcraft boat but had not returned. Chief Warrant Officer T.J. Malvesti on Monday told reporters a helicopter crew located the boat in part thanks to the family’s detailed plan for the trip. “The big takeaway and the success of this mission, being able to find them, was the fact that somebody on land knew where they were, where they were going, what time they should have been home,” Malvesti told reporter, according to WBZ. “He did everything right.”

#BREAKING: A father and his young sons stranded off south shore for hours are back on land in #Scituate thanks to a rescue from @USCGNortheast.