Tufts Has Purged the Sackler Name. Who Will Do It Next?

The family behind OxyContin has its name all over the country. 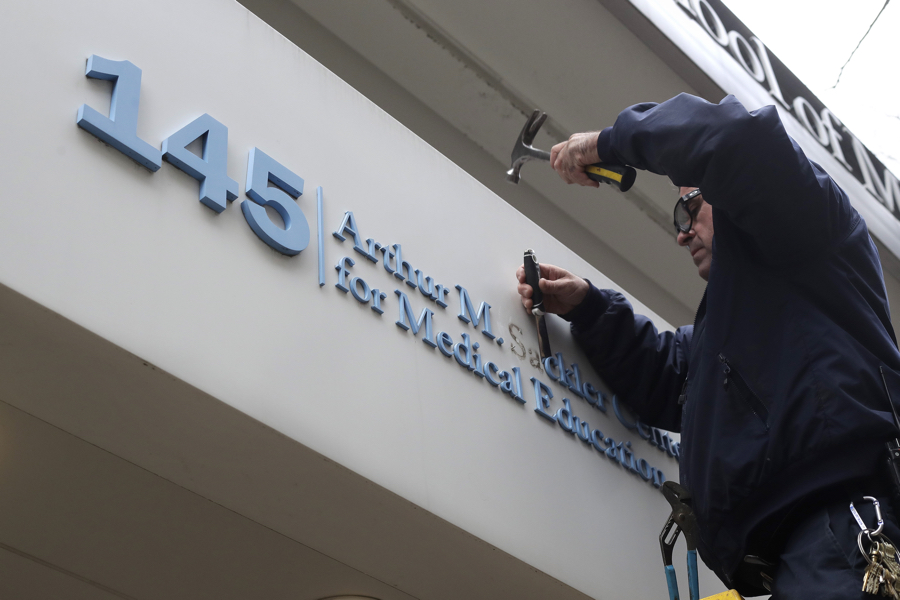 A collection of Asian, Middle Eastern, and Mediterranean art at Havard. A Yale life sciences institute. A gallery at the Smithsonian.  A “Music Composition Prize” at UConn.

The Sackler family name is plastered all over the country’s elite institutions. But as of this week, you will no longer find it at Tufts.

The college announced Thursday that it has changed the names of its Center for Medical Education, along with other buildings and programs dedicated to the family, whose company Purdue Pharma famously invented the powerful opioid OxyContin and pushed it on the American public. Under pressure from students in the wake of an outside audit, Tufts became the first university to decide enough was enough with the Sacklers. Purdue has been accused in lawsuits of downplaying what it knew were serious risks of dependency and abuse, and fueling a crisis that spun wildly out of control.

It’s time for Tufts to “move forward with its mission and its values in mind, and no longer [be] associated with a name that is associated with a major health crisis in America,” Tufts President Anthony Monaco said Thursday in a statement to the Boston Globe.

By day’s end, workers could be spotted unceremoniously hacking the letters off the sides of buildings with a hammer and chisel, and obscuring the building’s old titles with rollers and paint.

Sure I heard in the news that Tufts medical school is getting rid of the Sackler name, but on TikTok I can see a video of it happening in real-time set to *NSYNC pic.twitter.com/1Z3xQmIMJg

But Tufts is far from the only place that benefitted from the generosity of the opioid profiteers, who for decades have had cash to spend at prominent places of higher learning in the health sphere, as well as in the arts. Some of them are thus far refusing to give up the Sackler name, for a variety of reasons.

Harvard plans to keep the prestigious Arthur M. Sackler Museum’s name intact, reasoning that its namesake made the donation in the 1980s and so can’t be held responsible for the death and despair wrought by the opioid crisis. Arthur Sackler himself passed away in the ’80s. The Smithsonian says a contract signed decades ago means it’s legally obligated to keep the Sackler name on one of its buildings, but that hasn’t stopped it from launching a creative rebranding effort that is conspicuously Sackler-free (The Smithsonian insists the rebrand has nothing to do with the controversy). The Guggenheim will no longer accept donations from the family, but will keep its existing Sackler Center for Arts education—which it points out “serves approximately 300,000 youth, adults, and families each year”—intact. UConn, which is in the family’s home state, plans to redirect Sackler donations to addiction research, but still has the family name plastered all over campus.

In a statement, Jillian Sackler, Arthur M. Sackler’s widow, expressed her dismay at the moves to sever ties with her late husband. “Arthur had nothing to do with OxyContin,” she says. “The man has been dead for 32 years. He did not profit from OxyContin, and none of his philanthropic gifts were in any way connected to opioids or to deceptive medical marketing – which he likewise had nothing to do with. It deeply saddens me to witness Arthur being blamed for actions taken by his brothers and other OxySacklers.”

Could the Tufts decision put additional pressure on everyone else to follow their lead, or maybe give some of these prestigious institutions permission to finally shed the Sackler name for good? Now that Tufts has taken this step, the pressure is definitely on.

This post has been updated to include a statement from Jillian Sackler.