“A Blizzard of Prescriptions”: What Maura Healey’s OxyContin Lawsuit Reveals 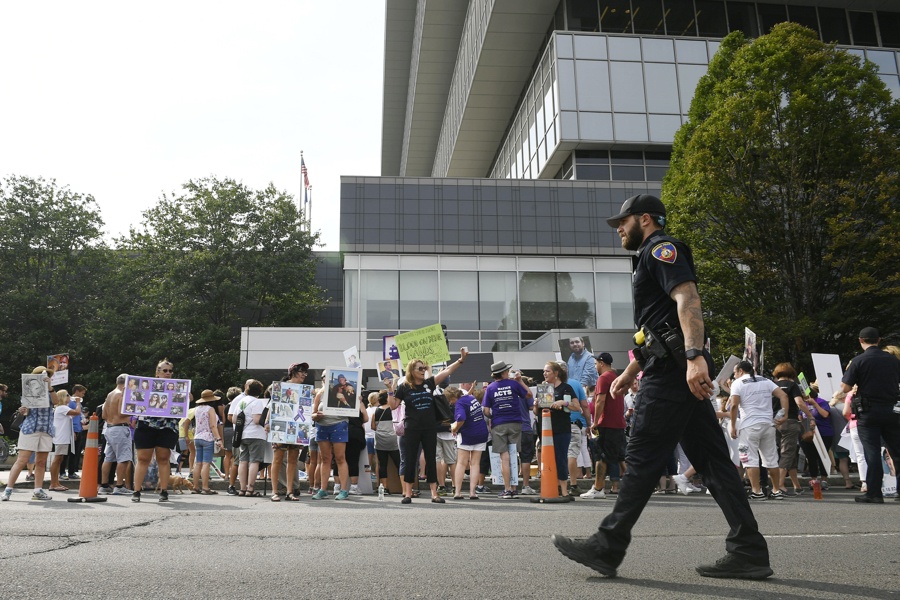 FILE – In this Aug. 17, 2018 file photo, family and friends who have lost loved ones to OxyContin and opioid overdoses protest outside Purdue Pharma headquarters in Stamford, Conn. Photo via AP/Jessica Hill

In what critics say is evidence of disregard for public safety and a cynical effort to pin blame on addicts, new documents made public Tuesday in a court filing by the Massachusetts Attorney General’s Office offer a disturbing look behind the scenes at Connecticut-based Oxycontin maker Purdue Pharma.

Two statements in particular from Richard Sackler—a member of the family that owns Purdue, and the company’s former president—say a lot about the thinking at a company that made billions as the opioid addiction and overdose crisis spiraled out of control.

The first came in 1997, when Sackler told a crowd at a launch party for OxyContin about Purdue’s plans to make the powerful painkiller a smash hit in hospitals around the country. “The launch of OxyContin tablets,” he allegedly said, “will be followed by a blizzard of prescriptions that will bury the competition. The prescription blizzard will be so deep, dense, and white.”

Later, in his zeal to take over the market for pain drugs, the documents allege, Sackler sent an email with advice on how to deal with a pesky problem executives faced: addicts.“We have to hammer on abusers in every way possible,” he wrote, the documents show. “They are the culprits and the problem. They are reckless criminals.”

The documents detail efforts to court doctors and hospitals, including Tufts and Mass General, and the blind eye Purdue allegedly turned to over-prescribing and other issues that fueled the epidemic, which has led to the deaths of thousands in Massachusetts and around the country.

We know all of this thanks to a case brought by Massachusetts Attorney General Maura Healey that seeks to hold the drugmaker accountable for its role in the opioid abuse epidemic. Healey sued Purdue, Sackler and several of his family members, and other company executives in June, alleging the company “created the epidemic and profited from it through a web of illegal deceit.” The suit, along with an amended complaint filed in December, argues hundreds of opioid deaths in the state can be traced back directly to Purdue and its efforts to push a drug it knew was dangerous—encouraging doctors to prescribe stronger pain pills than were needed over longer periods than were necessary—in an effort to increase profits, then downplay or cover up its risks and ill effects.

The suit follows an effort from 2017, when Healey joined attorneys general from around the country in a probe following a shocking report on the inner workings at Purdue that appeared in the Los Angeles Times.

Purdue paid $634.5 million in fines in 2007 after pleading guilty to charges for misleading the public about the dangers of its drugs.

In a statement to STAT, Purdue criticized the Attorney General’s office for what it called “a rush to vilify” the company and pointed out OxyContin was approved for use by the FDA and prescribed by licensed doctors. “Massachusetts’ amended complaint irresponsibly and counterproductively casts every prescription of OxyContin as dangerous and illegitimate, substituting its lawyers’ sensational allegations for the expert scientific determinations of the [FDA],” it adds, “and completely ignoring the millions of patients who are prescribed Purdue Pharma’s medicines for the management of their severe chronic pain.”