Here’s How Much Snow Boston Could See Tuesday

A wintry mix is headed your way. 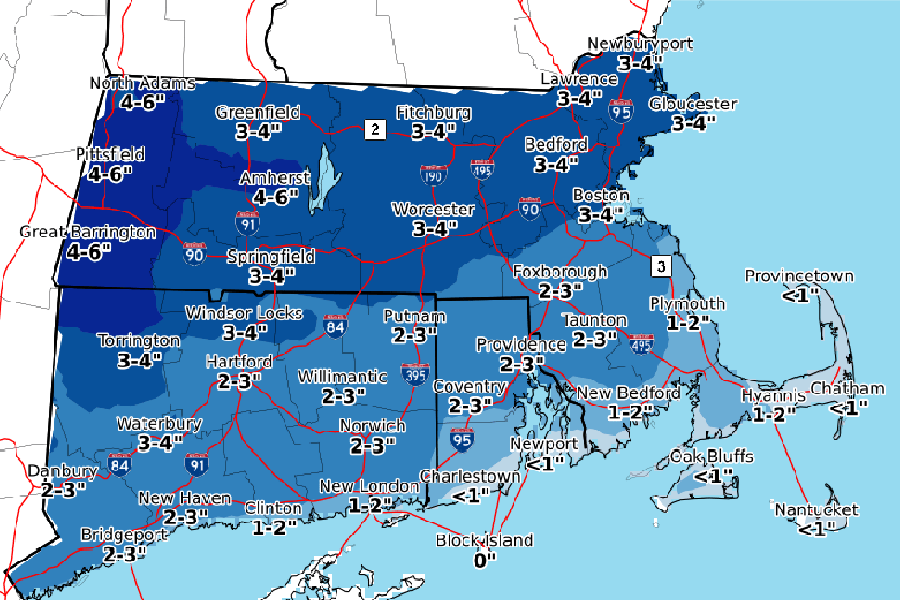 While this weekend may have felt more like May than December, keep your snow boots close—more winter weather is on its way to Boston.

After a windy day Monday, the National Weather Service predicts that snow will move into the Boston area after midnight and continue through much of the day Tuesday, potentially rumpling the morning commute. Expect the precipitation to begin as snow, and transition to a wintry mix later, the service says. A winter weather advisory is in place from 1 a.m. to 1 p,m. Tuesday.

For the Boston metro area, flakes could start to fall as early as 2 a.m. By 5 a.m., the snow will likely be very steady, and as temperatures rise throughout the day, sleet and freezing rain will make an appearance, too. This mix will likely last all day, potentially even stretching into Wednesday morning. However, accumulation will be minimal—only 2 to 4 inches in Boston, the weather service predicts.

As you could probably guess from the timing of this storm, the commute to and from work tomorrow will be a slippery one, despite the low accumulation predictions. The weather service warns that roads will be slick “no matter what direction you’re traveling,” and that visibility could be limited thanks to at-times heavy snowfall.

Wednesday, we’re potentially in for another snow squall or two—and they’ll usher in some chillier temps to match. Thursday’s and Friday’s highs are expected to reach only the mid-20s, which is well below the historical averages for those days. Here’s the good news for holiday travelers, though: For now, it looks like the weekend will be precipitation-free. So if you’re headed home, you should have a smooth ride.