That’s a Wrap for Metro Boston, the Free Paper That Was so Much Fun until It Wasn’t 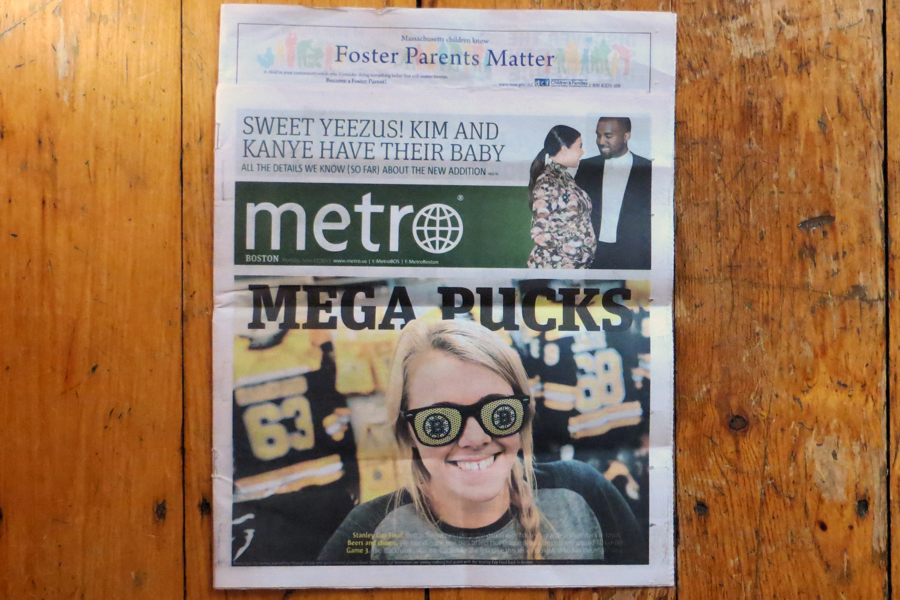 Photo by whereisyourtoothbrush via Flickr/Creative Commons

I loved the Metro. I really did. At least, I used to.

The scrappy, often batshit crazy tabloid, available for free in hundreds of green newspaper boxes around Boston, gave me my first shot at writing in the city a half-decade ago. By the time I got there, it was clearly starved for resources, but not for talent, or spunk. We did some good work back then, published some of the weirdest front pages imaginable, and even if it felt like it might go belly-up at any instant, it was fun.

After nearly 20 years as the city’s ubiquitous commuter-focused daily,  Metro Boston formally announced on Wednesday that the paper is ceasing production for good. The Boston Business Journal, tipped off by a farewell voicemail message, was first to report on the closure, and Metro publishers Ed Abrams and Susan Peiffer confirmed it Wednesday afternoon in an email to advertisers and its remaining staff. “After 19 years in Boston, we are sad to announce the closure of Metro Boston, effective today,” the announcement reads. It explains that the company could not sustain its Boston edition after the sale of its New York and Philadelphia papers to the company Schneps Media late last year, as it no longer had “access to centralized resources, and a difficult decision had to be made.”

What exactly was in store for the Boston edition had been unclear, but it’s been apparent for some time where things were headed. A former Metro employee tells me the paper had been moved to a once-weekly schedule over the summer. The final issue hit newsstands in December. Just one editor and a few advertising staff were on hand at the Boston edition at the end, working from a tiny office in Downtown Crossing, and the overwhelming majority of news content in the paper had been sourced from the Reuters wire service, rather than from in-house reporters.

I’m told that staffers in Boston learned they had worked their last day on Friday, January 3, via a brief email. It was an inglorious end to a paper that saw some talented people walk through its doors, and might have managed to stay viable longer were it not for some factors outside of its control—like the rise of smartphone usage on the T, where it had once been a go-to source of bite-size news for commuters on the go—or had it been managed differently.

“I always felt that it had the potential to be the perfect blend of old-school and new-school journalism,” the former staffer, who has asked not to be identified, tells me. “Blending those things together is still the winning recipe, and we were doing that at various points throughout the years, but I think the business people ultimately screwed it up.”

I’ll spare you the chore of having to walk too far down memory lane with me here, but suffice it to say that it hurts to see a paper that meant a lot to me finally croak. Especially like this.

After 19 years in Boston, we are sad to announce the closure of Metro Boston, effective today. We realize this may seem sudden, but after our New York and Philadelphia editions were sold, we no longer have access to centralized resources, and a difficult decision had to be made.

We want to sincerely thank everyone who has supported Metro Boston over the past 19 years. Hopefully we are leaving this incredible city better off than when we started publishing in 2001. A special thanks to our founders, Metro International, our management, editors, sales team, distributors, and everyone else who has been involved in this newspaper since the beginning. You’ve all worked so hard to make Metro an important part of Boston’s media landscape. In the publishing world, you’re only as good as the people who bring the paper to life each day, and it’s been an absolute joy to share this Metro journey with all of you.

To our loyal advertisers, thank you for trusting us to promote your business. We’ve enjoyed many successful partnerships, and you’ve always been willing to share your passion for the Metro brand. To our valued partners and vendors, we thank you for your support and belief in the free commuter daily.

And finally to our readers, none of this would have been possible without you. Thank you for continually giving our editors valuable feedback to help us improve the product over the years. As you continue to enjoy life in this beautiful city, we hope you will remember Metro Boston as fondly as we will remember you.