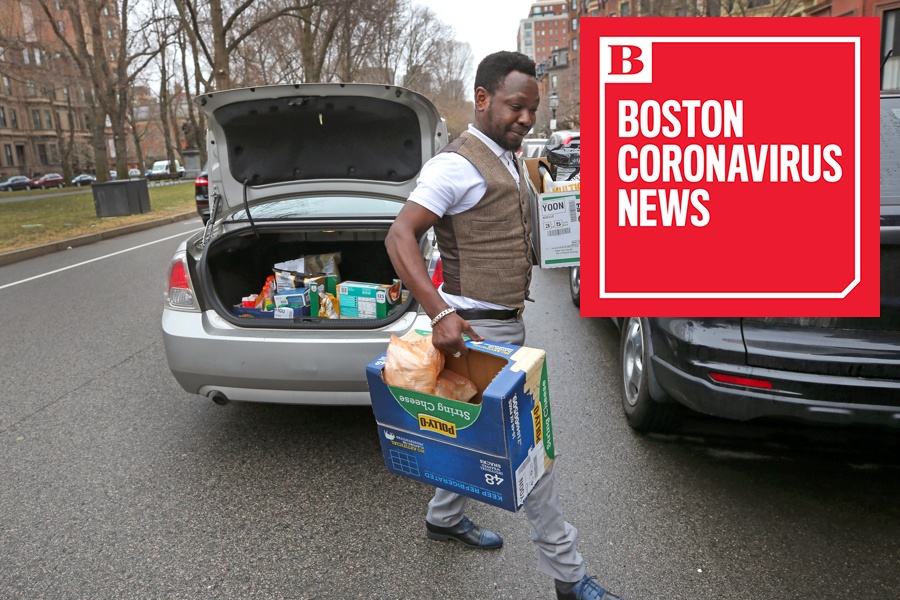 BOSTON, MA – MARCH 17: Edward Kakembo makes a delivery for Instacart, a company he’s been an employee of for two years, on March 17, 2020 in Boston. (Photo by David L. Ryan/The Boston Globe via Getty Images)

They’re Still Working for You, and They Want Better Conditions

The legions of grocery store clerks, grocery delivery pickers, and warehouse workers keeping us all alive and well-stocked in Boston and around the country right now are speaking out about working conditions, and many are walking off the job. On Monday, many Instacart workers went on strike, Amazon workers walked out of warehouses, staff at Amazon-owned Whole Foods said they would stage a “sick out” at locations around the country, and GE workers at a plant in Lynn have been raising hell over their fears about working in close quarters. Their demands range from enhanced sanitation procedures, especially when their coworkers are inevitably sickened by the virus, hazard pay, and more protective equipment. If you can’t see why they deserve all that and more right now, I honestly can’t help you.

By the Numbers: Confirmed Cases by County

With 1,141 cases total, Middlesex County is the hardest hit in the state so far, according to data on the number of people who have tested positive for COVID-19 that the state has been sharing each day. Suffolk County is a close second, with 1,115 confirmed cases. Here is the state’s latest map:

A pretty simple way for you to keep supporting the restaurants you love and also, you know, a good way to toss a couple back while in self-isolation is about to become legal in Massachusetts. Or so hopes what remains of the city’s restaurant industry. A bill that would permit the sales of beer and wine with takeout orders has been amended by the Senate and sent back to the House, where if given the green light it awaits only approval from a signature from Gov. Baker. Legislators were set to reconvene Tuesday. Meanwhile, the Massachusetts Restaurant Association is getting antsy. “We hope our elected officials recognize that time is off the essence and their delays are only hurting an industry that has been besieged by COVID-19,” the group says in its latest update.

A Terrifying Scene in Holyoke

A veterans nursing facility in Holyoke has seen what essentially amounts to a worst-case scenario: At least 11 veterans at Soldiers’ Home have died and at least 11 more have been sickened, after the virus apparently made its way into the facility, which is full of at-risk patients, and wreaked havoc. It may be too early to say definitively who is at fault here, but Holyoke Mayor Alex Morse said he thought the facility “hadn’t taken the adequate precautions.” Gov. Charlie Baker called the deaths “a shuddering loss for us all.”

Newly announced cases of COVID-19 afflicting public employees who still have to interact with the public have rolled in, and so far at least 18 MBTA employees—including 10 bus drivers—have tested positive, according to the agency. On top of that, 19 Boston police officers and three civilian employees now also have confirmed cases.

In Case You Missed It, Here’s Office Jim with “Some Good News”

Phew. Not a lot of great news today! But Newton’s own John Krasinski has what he hopes is at least a temporary antidote to all the dread and horror of this news cycle, and has collected a list of lots of good stuff happening around the world. Would suggest you take a few minutes worth of a breather with him in this video of the superstar at home, delivering a feel-good news broadcast.