The Long Way Home: Confronting My Identity on the MBTA

What does it mean to be a Bostonian? How a crowded T ride made me question my identity—and the city’s. 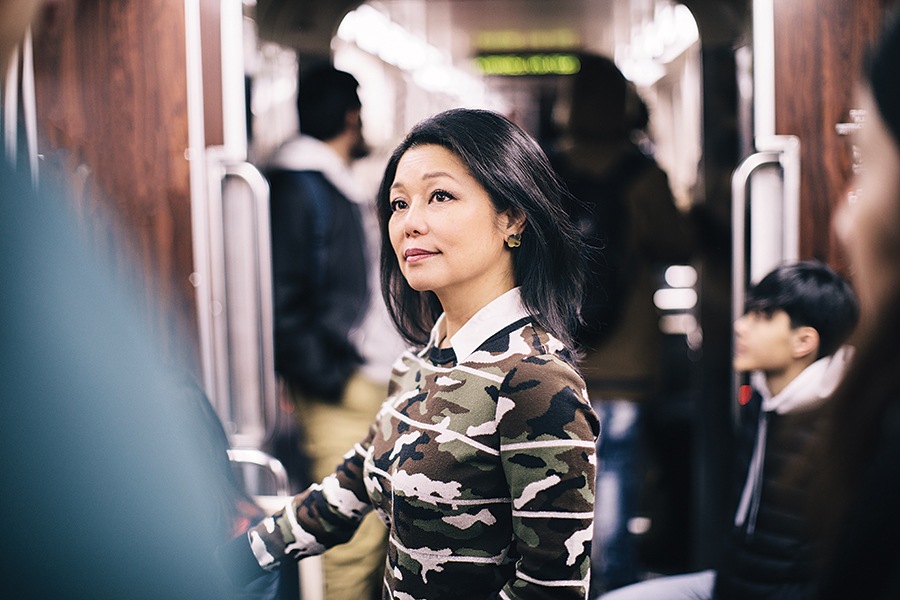 The question started making the rounds a few years ago, sometimes whispered in my ear, other times asked outright in large gatherings: “Has it happened to you?”

It did happen to me.

I had just hopped onto the Green Line, heading inbound to Copley Square, after brunch near Coolidge Corner. The Sox were playing at home and the T was crowded. Defying the laws of physics and personal space, scores of us were crammed into a trolley car with the kind of intimacy that should be shared only by lovers. Faces faced armpits, and with each squealing stop, more people boarded to lean and careen into one another. Hemmed in by so many strangers, and with many stops to go before mine, I tilted my head back, closed my eyes, and started daydreaming to pass the time.

A woman spoke out.

“The problem is, we let too damn many in.” Right, I thought, as if the conductor really has any control over that.

She said it again, louder this time.

“The problem IS, we let too damn many IN!”

I mentally agreed with her. The T really should add more trains on game days.

And then she started shouting: “WE SHOULDN’T LET SO DAMN MANY IN!!!”

I opened my eyes. She was looking at me.

This time I understood her perfectly, as did all the other people who regarded our sudden strange pairing with a mix of shock and morbid curiosity. Here, in one of America’s most liberal cities, she was yelling to a captive audience that I didn’t belong.

Everything downshifted to slow motion. I felt panicked and sensed the crowd backing up. I finally had more than enough room to breathe, but I couldn’t. I was now connected to this woman as if we were part of a bloody two-car crash.

Those adept at power plays and politics talk of the so-called rage response, how one reacts when attacked. It may involve anger, fear, flight, or revenge. Even worse is the feeble desire to explain yourself, with hope that your tormentor will undergo some kind of enlightened reformation and stop.

As I stood there, my history began flooding through my head, and I ached for this woman to know it all. I wanted to tell her, in perfect, carefully selected English, that I was born in Houston to parents of Chinese descent but believed, for much of my early childhood in a quiet bayside Miami enclave, that I was Jewish. After all, most of my friends were. I was a regular at their Passover seders and bar mitzvahs. I wanted to tell her how the unexpected reflection of my own face when I was growing up could startle me.

There were so few Asians in Miami when I was a kid that we would smile when encountering one another in restaurants and shopping malls. They didn’t even have to be Chinese; any Asian would do. The first time in my life I was surrounded by Chinese people, however, didn’t feel so friendly.

The year was 1979. We were still too young to fully grasp the politics, patience, and effort that let my father return to China in 1975, a quarter-century after he had fled the war and chaos. Following this solo trip, the government was allowing him to return again, this time with his American-born wife and four children. No Americans were going to China then, and the prospect of our trip was both exciting and a bit terrifying. Friends dramatically threw out the “homeland” word, leading me to believe that I was about to rediscover something truly essential about myself.

For months before our departure, my siblings and I sat at the dining table in our midcentury-modern house, practicing with our chopsticks. We wanted to impress my father’s mother and brother, his only surviving relatives. Technique is scrutinized in China, and the Chinese can be the snobbiest of people. We would not get points for simply delivering food to our mouths. As I practiced, I savored the expectation of two months of my father’s style of cooking. My siblings and I preferred his exquisite Chinese dishes to my mother’s American casseroles, which often featured tuna fish or potato chips. Despite their shared Chinese heritage, my parents had a cross-cultural marriage. My father, the only immigrant among us, never said an unkind word about my mom’s cooking. He was open-minded to foreign cuisines.

I, on the other hand, turned out to be less accepting. That summer in China, I remember eating mostly entrails and fungus; the food made me sick. I was depressed to learn that most of what I thought to be Chinese cuisine was actually a kind of Western bastardization. It wasn’t just the food that disgusted me. I silently criticized the locals for eating with their mouths open and burping loudly during meals, not yet understanding what it meant to accept manners and customs that were foreign to my own. As we walked the streets, I clung to my parents while holding my nose and keeping my eyes down. People were spitting all around us, and I was offended, terrified, and embarrassed by this culture that was supposed to be mine.

The animosity cut both ways: My family and I were instantly recognized as outsiders, Chinese tainted by capitalism. People stared at us and gathered around whenever we stopped, pointing at our clothes, shoes, and hair. We might as well have been purple. Of course they were talking about us, but I couldn’t understand what they were saying. I only knew that we didn’t fit in. That was the worst part, feeling foreign in the very place I expected to feel at home.

I was homesick, terribly homesick. For America.

I felt a sudden stab of guilt that I so desperately wanted my Green Line tormentor to know I wasn’t fresh off the boat.

“WE SHOULD SEND THEM ALL BACK!!” the Green Line woman yelled, shooting me another look. With those words, I was thrust into identity limbo. She wanted to banish me to a country I wish I knew better—despite having returned there half a dozen times since that first visit—but don’t. Like so many who have been similarly misunderstood, my instinct was to yell, “BUT I WAS BORN HERE!!”

There was something else I longed to tell the woman on the Green Line whose eyes burned into mine. My Chinese-American mother was born in Philadelphia. Her name is Elizabeth. She was one of the first women to attend the University of Pennsylvania, before continuing her education at UC Berkeley. Growing up, she was more hippie than immigrant, surprising her stylish family and friends by refusing to wear fur. My mother has an enduring love affair with the English language, and still struggles, as I do, with the Chinese she faithfully studies twice a week as a foreign language. I knew the Green Line woman would fail to appreciate the irony.

Another thing I didn’t tell the woman who looked at me with such hatred is that we can all be racist. Perhaps I am worse because I have caught myself discriminating against the very people who are my own. In the years since that first trip to China, I have glared at Asians on buses whose loud conversations irk me as guttural and intrusive. I have rolled my eyes at the odors and litter I encounter while walking through Chinatown.

I felt a sudden stab of guilt that I so desperately wanted my Green Line tormentor to know I wasn’t fresh off the boat. It’s an emotion I’ve grappled with a lot lately, as I shrink at coronavirus jokes and comments about avoiding Chinatown and Chinese people. Recently, I was on a Silver Line bus when a stocky bald man yelled at a wizened woman twice his age but half his size after she accidentally bumped him with her shopping cart. “Go back to Hong Kong!” he screamed, hulking over her tiny frame as the Green Line woman loomed over me. This time, other riders yelled back, telling him to sit down and shut up. “I’m not racist!” he kept shouting. “I’m not racist! I just believe foreigners should work to belong here.” As he yelled, I had to stifle an involuntary laugh as I thought less about his racism and disrespect of an elderly woman than his almost hilariously misguided image of Hong Kong.

Here’s another irony the Green Line woman would never understand. I am constantly hit with low-grade insecurity about not being “Chinese enough.” I am basically illiterate in Chinese. I can help you find your hotel, a restaurant, or a restroom, but I am unable to express ideas in what most people assume is my native tongue. I speak, in effect, like a four-year-old. With Mandarin now being one of the most popular languages to study, I am secretly envious of Caucasian friends who can deftly order Chinese food…in Chinese. If they can write characters, I want to kill them. I sometimes feel that non-Asians who have mastered this difficult language are taking something that doesn’t belong to them. But it doesn’t belong to me, either. And so I stood on the train that day, a stranger to my heritage and an outcast from my nationality.

I am certain there were actual immigrants on the Green Line that day. I just happened to look most like one. My great-grandfather on my mother’s side came to this country in the late 1800s, so it’s quite possible my family had a longer history in America than anyone else on that trolley.

No politically correct volunteers came rushing to my rescue, and for that I am grateful. One must face her bullies alone. A response was required only of me. I’m sad to admit it wasn’t bold, cutting, enlightened, or witty. Those kinds of replies never come to me until weeks after they’re needed.

“We let TOO DAMN many in!” the lady shouted again, leaning into my face.

I looked her squarely in the eyes. “Are you volunteering to go back?” I asked. “That’s really not necessary.”

At that moment, my stop came up. I was tempted to stay on to scrutinize her history, her stories, and her heritage against my own, but I realized that would only make us equals on a very cruel playing field. With resignation, I stepped off. I never got the chance to tell her that “first” doesn’t matter. Even with the crowd, I still believe there was room for all of us on that train.