The AG's office sent a cease and desist letter to the fireworks company Wednesday. 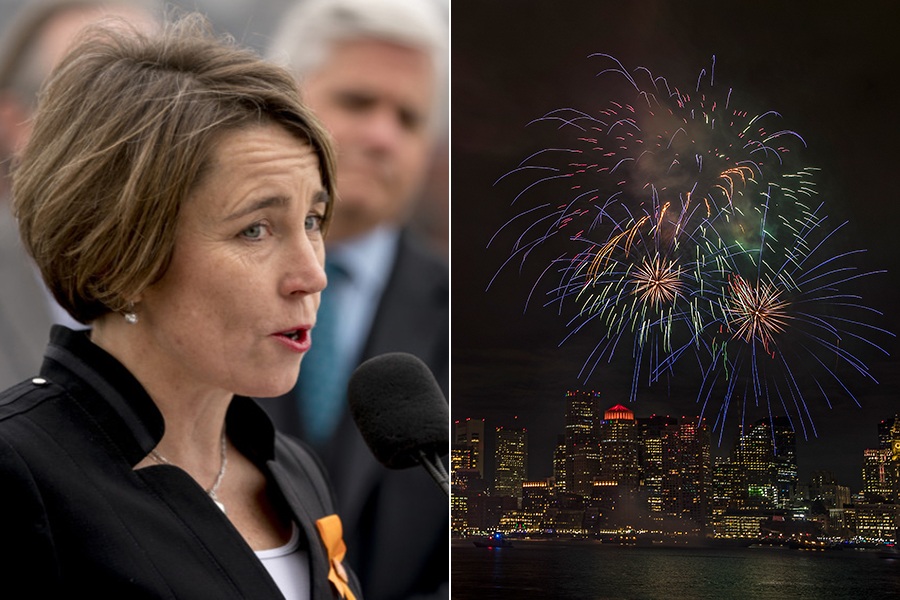 For the past few weeks, incessant amateur fireworks shows have been lighting up the night sky across Massachusetts, terrifying pets, waking up babies, and depriving plenty of state residents of sleep. Now, the office of Attorney General Maura Healey is taking steps to restore the peace and quiet.

Wednesday, Healey’s office sent a cease-and-desist letter to Phantom Fireworks, a well-known Ohio-based fireworks retailer that operates several stores close to the Massachusetts border in New Hampshire. The letter demands that the company stop mailing advertisements to Massachusetts residents. Per the letter, the advertisements that state residents have received contain coupons for discounts and highlight the proximity of Phantom Fireworks’ New Hampshire stores to the cities of Boston and Springfield. They also encourage recipients to celebrate July 4th “in backyards across America.”

“Phantom Fireworks knows its products are illegal in Massachusetts, yet we are hearing that residents are getting their advertisements in the mail,” Healey said in a statement. “We sent a cease and desist to stop this intentional marketing scheme and prevent more of these unsafe products from being brought into our neighborhoods.”

Under Massachusetts law, the sale and offering for sale of fireworks is illegal, as is the possession, use or explosion of fireworks. The letter alleges that Phantom is also in violation of the Massachusetts Consumer Protection Act by directly marketing a product to Mass. residents that is illegal, and proposing that state residents partake in illegal behavior.

The letter demands that Phantom immediately cease mailing, delivering or directing advertisements to Massachusetts dwellers. If Phantom continues to engage in the same conduct, the letter says, “the Attorney General may take legal action.”

Healey’s cease and desist letter is only the latest in a number of efforts put forth by local leaders since Mayor Marty Walsh revealed earlier this month that there had been a 2,300 percent increase in the number of fireworks complaints to Boston Police leading up to Independence Day. Boston City Councilor Julia Mejia has been at the forefront of this effort, hosting town hall meetings and founding a Facebook group to allow her constituents to voice their concerns and creating public service announcements bearing the hashtag #StoptheSpark. Still, though, neighborhood Facebook groups, Twitter, and the Nextdoor app are flooded with complaints about the noise.

In a statement to Boston, Phantom did not hide its disapproval of the rigid Massachusetts laws against fireworks.  “We find it ironic that Massachusetts, the birthplace of former U.S. President John Adams, the author of the most iconic fireworks quote in American history, is the only state in the U.S. that totally bans the use of consumer fireworks,” the statement reads.

The company did not specify which of the Braintree-born founding father’s quips is the most iconic fireworks quote in American history. However, Adams has oft been credited with spurring the tradition of lighting fireworks in honor of the Fourth thanks to this July 3, 1776 letter, which he penned to his wife Abigail after the Continental Congress voted for independence on July 2:

But the Day is past. The Second Day of July 1776, will be the most memorable Epocha, in the History of America.

Anyway, Phantom says that it has discontinued further mailings into Massachusetts “as a courtesy to the Attorney General’s office.” There remains a possibility, however, that some state residents may see a billboard or TV ad for Phantom due to the company’s previous contractual commitments, the company says. If you find that you’re still receiving advertisements from Phantom Fireworks, you can file a complaint with the AG’s office online—and remember, as you lie awake in bed listening to yet another round of Bells, Bonfires, and Illuminations tonight, it’s all John Adams’ fault.

This story has been updated to include comment from Phantom Fireworks.