Traces of the fires out west have cast a haze over the region. 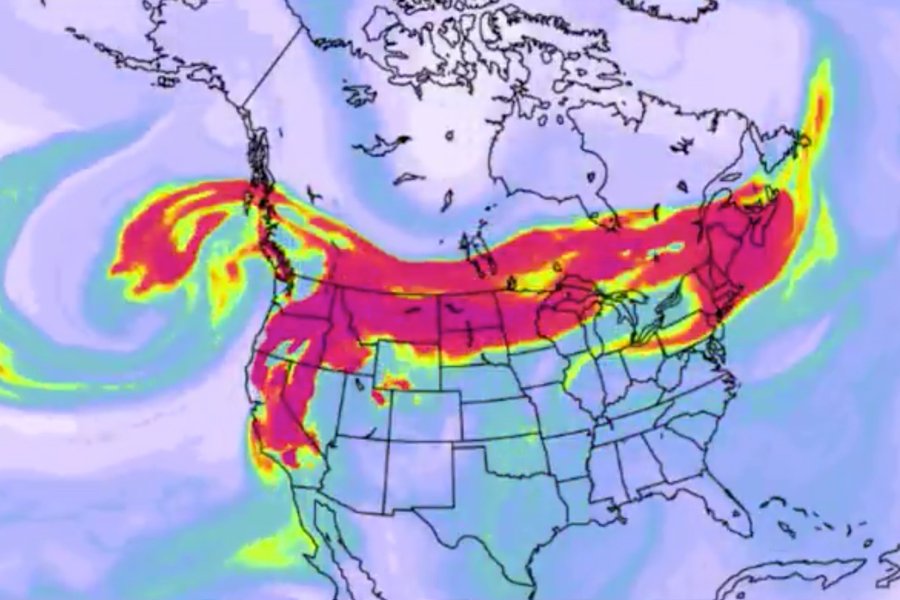 For weeks now, our neighbors on the West Coast have been appealing to East Coasters to grapple with the severity of the wildfires currently tearing through their communities. For people who don’t experience it first-hand year after year, as the New York Times’ Charlie Warzel wrote last week, it’s easy to forget just how hellish the conditions can get out there.

Widely shared apocalyptic photos of red-hued skylines and reports of actual ash falling from the sky have brought unprecedented attention to the situation, sure. But now Massachusetts is getting a very real, if less visceral, taste of the currently unfolding disaster on the opposite coast. Just take a look outside: Smoke from the fires has officially arrived, bringing a layer of haze over our region and, at present, blocking out the sun.

[Hazy Skies – Smoke from Western Wildfires] Notice the sky is looking a little hazy? This is smoke lofted well aloft in the atmosphere emanating from the Western U.S. wildfires.

[Smoky Skies Again Wednesday] This computer model indicates that the large forest fires out west will result in smoky skies across #SNE again on Wednesday. pic.twitter.com/DvjZbau45H


Satellite images and models from NASA and NOAA show particles from California, Oregon, and Washington making their way across the continent in the upper atmosphere. The results were apparent here by this morning, as the sun rose shrouded in haze. That’s right: It’s not overcast today in Boston, because those aren’t clouds.

“If it wasn’t for the smoke, we’d have nice crystal blue skies and sunshine,” says Alan Dunham, meteorologist with the National Weather Service in Norton.

Dunham says the smoky pall is likely to stay here for “a couple days at least” until a shift in the jet stream blows it away.

Some of the thickest upper level smoke #WesternWildfires is over greater Boston this morning. You really get a sense for how massive the fires have to be for this amount of smoke to make it all the way across the country and be basically dimming the sun this morning. pic.twitter.com/sRfCDttKMP

While we do occasionally see the impacts of distant fires—blazes burning in Canadian forests have sent smoke particles to Massachusetts in the past—this is the first time in recent memory we’ve had visible impacts of them travel all the way from the West Coast, Dunham says.

Unlike out west, where air quality is now the worst in the world, the smoke particles are not having an impact on breathing here in Massachusetts. MassAir Online, the state’s regularly updated air quality monitoring widget, shows “good” ratings statewide. Still, NASA has warned that the conditions can “bring hazardous air quality across the country” as noxious aerosols are carried along the jet stream.

For right now, all we’ve got is a faux fog to remind us of the plight of our fellow citizens 3,000 miles away. And, apparently, some especially red-tinged sunsets in our immediate future.

[6:45am] Waking up this morning to what may look like overcast skies, but we have another smokey day on tap for southern New England. The red glow of the sun really highlights the smoke in the upper atmosphere! pic.twitter.com/oXdL8jSdhZ

It looks cloudy #Boston but this is a red sun peeking through a layer of smoke from the western US wildfires. #TheThingsYouSeeIn2020 pic.twitter.com/UhIDSvOnre

@TerryWBZ the smoke from the Western Forest fires reach Boston. Seen here is a Smokey sunrise over Beacon Hill from the Fresh Pond moraine in Cambridge pic.twitter.com/J3vV9EqkU7