No one has earned a cheat day more than this guy and he obviously went for it. 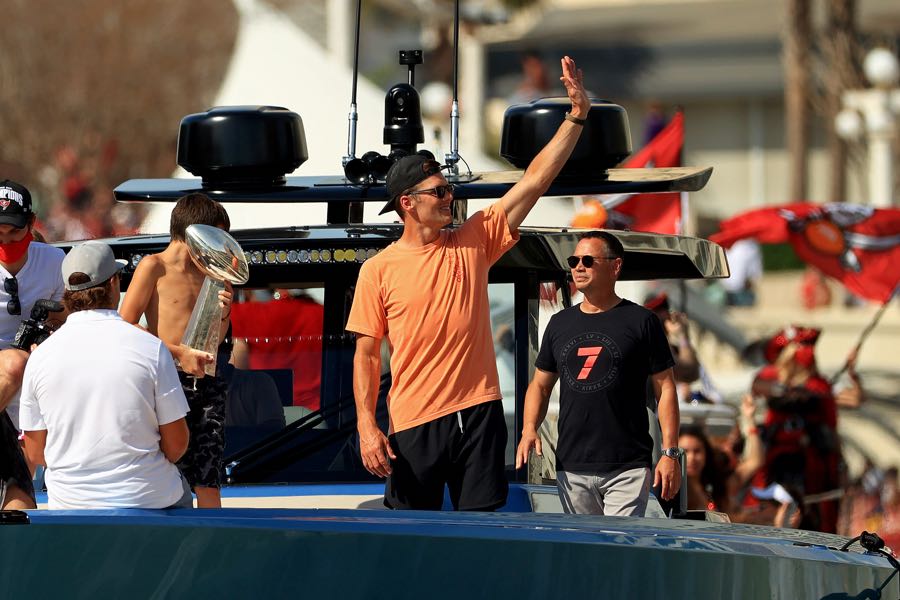 No one on earth deserves a cheat day more than Tom Brady, an athlete whose obsession with depriving himself of earthly comforts like tomatoes and certainly alcohol of all kinds is as much a part of the mystique as his body’s resistance to the passing of time.

But not today! The ex-Patriot has spent the day in sunny Tampa living it up with his fellow Super Bowl Champion Bucs in deeply Floridian fashion. Yes, as video evidence from the scene today shows, Tom Brady celebrated his seventh ring by having a LOT of fun on a boat.

Video from Tampa Bay Times sports reporter Joey Knight shows the 43-year-old superstar struggling to find his “sea legs” as he ambles past the press on a dock, supported by a member of his coaching staff and sporting what can only be described as the biggest, Super Bowl winningest shit-eating grin across his face.

I guess his sea legs aren’t what they used to be… pic.twitter.com/44K42bWPMe

A Tom Brady in a state of revelry is not a new sight. We were spoiled by such things during his tenure in New England, back when he rung in his victories on earth-bound Duck Boats motoring through chilly Back Bay. But a Tom Brady in this state? Now that you do not see every day.

Tom was in rare form during a floating rally along the Hillsborough River, which apparently included some un-Bradylike debauchery. In one clip that made the rounds this afternoon, he could be seen heaving the Lombardi trophy from his boat to Gronk’s, risking plunging it into the Floridian depths. Thankfully, though, the pass was complete.

In the aftermath of the “sea legs” video going viral, the GOAT weighed in with his own insights about what was going on:

Anyway, a sincere congratulations to TB12. We’re happy he could set his diet regimen aside for a day before he heads back to the carb-less grind. And we’re glad to see he’s settling into his Florida Man bona fides with such vigor and authenticity. All the best, big guy. Drink some electrolytes. And whatever you do, do not try to keep up with Gronk.

.@RobGronkowski just said someone might need to take him out of here on an ambulance. pic.twitter.com/EO5AP1Igfk