His Mission: To Map, and Eat, Every Cider Doughnut in New England

One Cambridge man's quest to sample every cider doughnut has led to a list of more than 240 purveyors and counting. 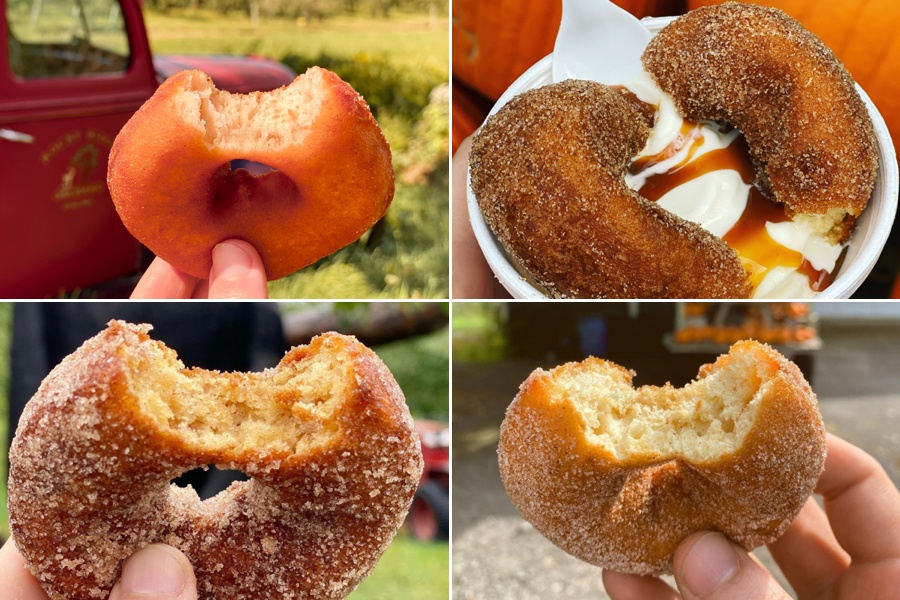 All across New England, the first whiffs of crisp autumn breeze are in the air. So, too, is the scent of freshly baked apple cider doughnuts at the farm stands, orchards, and adorable roadside markets spread out across all six states.

And Cambridge’s Alex Schwartz is on a mission to hunt down, catalogue, map, and, importantly, sample every last one of them.

Last year, Schwartz set out to create a comprehensive guide to every hot and fresh cider doughnut currently available in the region. Right now he’s up to more than 240 locations, from Silverman’s Farm in southern Connecticut, to Hackett’s Orchard on Lake Champlain. And he’s committed to chowing down on doughnuts at all of them.

“To me, the cider doughnut is a staple of life and growing up here,” says Schwartz, the 34-year-old head of a local tech company. He says he got the idea for the project as a way to spread good vibes amid a series of pandemic-era bummers. “The last few years have been a shit show, but this really is something that we can all agree on and love, and just get a little bit of pure, unadulterated joy out of. So it feels like a good peacemaking activity that I can do.”

The result is an impressive, possibly unprecedented, accounting of all the places you can find this iconic treat:

By now he’s heard of plenty of day-trippers who’ve used his maps to plan perfect fall afternoons, and with the thick of fall just around the corner, he hopes the maps will play a part in lots of people’s seasonally appropriate activities.

Despite the relatively simple recipe, he insists every cider doughnut is unique. He’s also running an Instagram account, where he has adopted the persona “the cider donuteur” and reviews each doughnut he finds on his journeys, weighing their varying sweetness, crumb texture and density, frying technique, and sugar (there is, if you didn’t know, a split among cider doughnut purveyors between those that dust their pastries with white sugar and those that use a cinnamon-laced variety).

A post shared by Alex the Cider Donut Reviewer (@ciderdonuteur)

Just as important as the quality of the doughnut itself, though, is the ambiance. A quintessentially New England farm stand, the kind an aspiring Mr. Autumn Man would appreciate, gets bonus points.

“I could eat the best doughnut in a dirty parking lot. And it’s not going to be as good as an eight out of 10 doughnut in perfect fall weather at an orchard, with the breeze and a duck pond in front of you and crunchy leaves, right?” Schwartz says. “There’s something about that that kind of completes the experience. So when I review it, I take both into account.”

There are also rules: Schwartz refuses to review cider doughnuts produced at bakeries far removed from orchards, or supermarkets where prepackaged doughnuts might be several days old. He panned the cider doughnuts at Dunkin,’ was repulsed by the cider doughnut-flavored variety of Oreos, which he said tasted “like a candle,” and once photographed himself flipping off a package of Entenmann’s. A proper cider doughnut, he says, must be enjoyed piping hot out of the frier, preferably with steam pouring out of a paper bag and with a toasty cup of hot cider or pumpkin-spice coffee in hand, ideally mere steps from the trees where the apples were sourced.

For that reason his map includes just one location in Boston: at Boston Public Market, where local orchard Red Apple Farm has set up a doughnut-frying cart. For an enhanced Red Apple experience, he recommends the orchard’s cider donut stand hidden on a black diamond ski trail at Wachusett Mountain.

Visiting every single doughnut purveyor in New England is no easy task. Since embarking on this project last year, he’s sampled about 40 different varieties of cider doughnut. He hopes to hit about that many again this season.

He has had to learn to pace himself. On a trip out to Bolton, Mass., which he says is something of a cider doughnut hotspot, he vowed to stop in for a doughnut at every farm stand he passed. “That was actually a little bit dangerous, because I ended up eating six different doughnuts and doing six different reviews that day. My stomach was not super jazzed about that,” he says. “But, you know, I was doing it for the cause.”

Bigger ambitions beckon. He says he’s not content to limit himself just to New England, despite the treat’s iconic status up here. There’s a vibrant cider donut scene in Washington State he’d like to sink his teeth into, for example.

But he’s kept it local for now. Top of the list so far, he says, is Russel Orchards in Ipswich, which he crowned the best of the best in 2020 due to its time-tested old fashioned recipe, impeccable consistency, and pristine environs.

Are there better cider doughnuts out there just waiting to be discovered? Only one way to find out.

Note: This post has been updated to reflect that, thanks to input from fellow fall baked-good fanatics, Schwartz’ total count of New England cider doughnut purveyors as of mid-October has increased from 191 to more than 240. He certainly has his work cut out for him.