The family-friendly institution's new campaign has teed up some NSFW jokes. 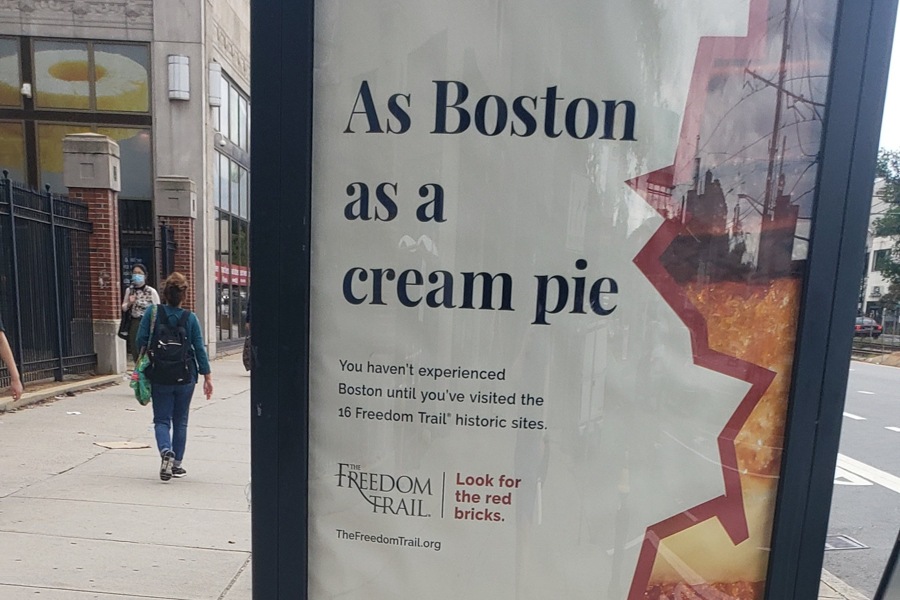 A new ad for the Freedom Trail is attracting an awful lot of attention this week—and not, it’s safe to assume, the kind the family-friendly Boston institution was after.

The advertisements, spotted at several bus shelters around the city in recent days, offer what is intended to be a quick turn of phrase aimed at tourists flocking here for sight-seeing: “As Boston as a cream pie.”

The message sits atop a white background, next to what appear to be the layers of a freshly sliced pie, of the sort made famous by the city’s historic Parker House hotel.

I’ll be honest, when I first spotted an image of the ad making the rounds online, my first thought was that salty locals were poking fun at the dated dessert reference. After all, how Boston is a Boston cream pie these days? The treat is up there with baked beans and the term “Beantown” among old tropes whose link to the city is significant only to visitors from far away.

But then it hit me. The internet was not simply being snooty about chocolate pie. No, the hundreds of smart-asses chiming in about the phrase had drawn a much different, and decidedly not-safe-for-work, conclusion from the ad copy. (Please don’t make me explain it to you. Google it if you must.)

Feel like the copywriters could’ve thought a little more about this one pic.twitter.com/8i8IU82qtq

As expected, a lot of racy, pun-laced, and often pretty gross jokes have emerged online the past few days, as have references to an iconic misunderstanding in an episode of It’s Always Sunny in Philadelphia. “Well, someone in this decision making chain can have the content filter removed from their computer,” one commenter on a wildly popular Reddit thread poking fun at the ad wrote. “That’s a big oof right there,” wrote another.

The Freedom Trail itself seems to have taken notice. Under one tweet, reading, “Feel like the copywriters could’ve thought a little more about this one,” the institution wrote this reply: “Don’t do this to us… Please…,” coupling it with an emoji of a face with a bead of sweat forming on its brow, and a “math lady” GIF.

It did not respond to a request for comment, and deleted the tweet after we reached out. 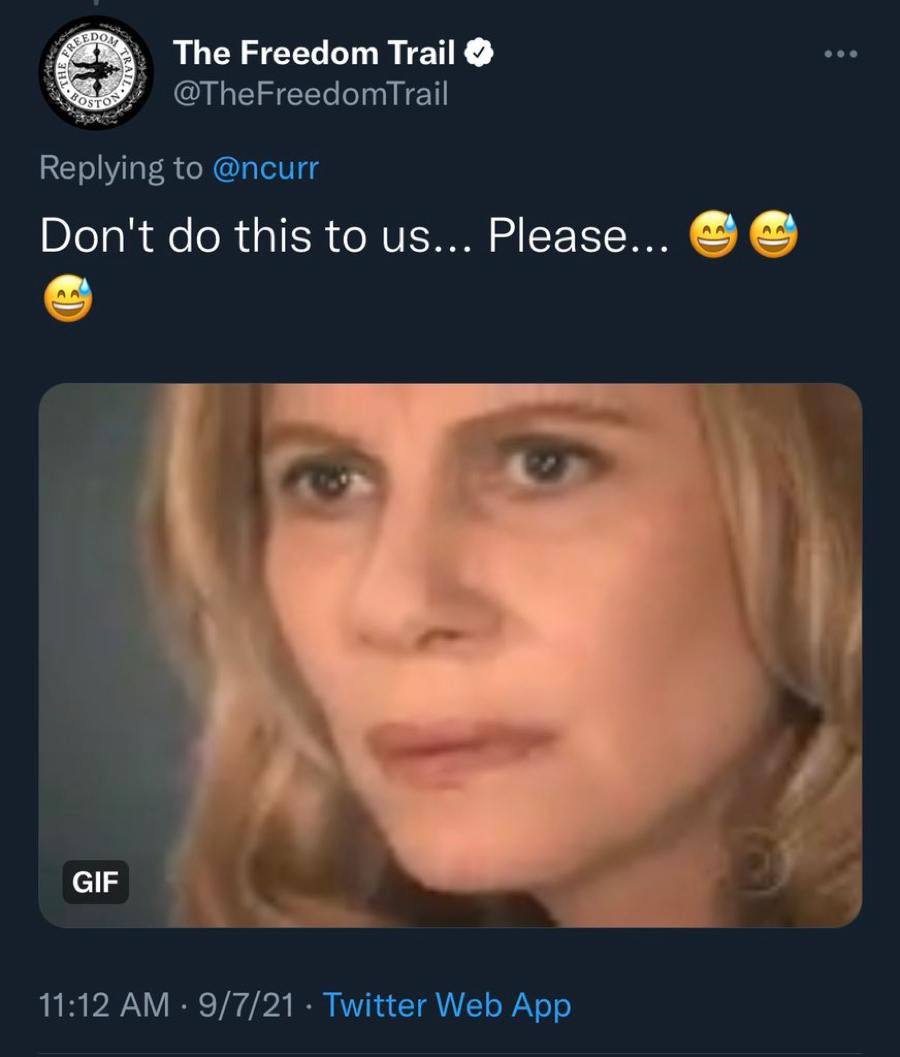 Now, look. Clearly our friends at the Freedom Trail were going for a more wholesome message here, and you can’t help but feel bad for them now that they’ve triggered this kind of response from people whose minds are perennially in the gutter.

It does, however, come with the territory around here. Boston’s internet community has a knack for sniffing out innuendos in places they don’t belong. Another ad, this one for a cannabis delivery company, has also caught the attention of some local perverts in recent days. As has this billboard for a local Catholic school.

This city has also seen controversies spurred by worse advertising sins than this, like when TD Bank had to apologize for an ad about losing your debit card in Dorchester that critics instantly slammed as racist. Or, also in Dorchester, when the neighborhood historical society pulled a holiday promo that declared it was “Dreaming of a White Dorchester.” For years, Legal Sea Foods made what appeared to be a concerted effort to ruffle feathers with its cheeky ads, and more than once took things a little too far.

In this case, here’s hoping all the unintended attention generated by the Freedom Trail ad leads more people to make use of the city’s famous route, and maybe pay a visit to historic sites like the Paul Revere House and USS Constitution. Especially given the hit the local tourism industry has taken in the pandemic, they can use all the foot traffic they can get, however they get it. Additional logos on the poster suggest it is supported by the governor’s newly launched “My Local MA” initiative, alongside the Greater Boston Convention & Visitors Bureau, and the city’s B-Local app, all of which are working to get small businesses back on steady footing.