But don't expect a sequel. 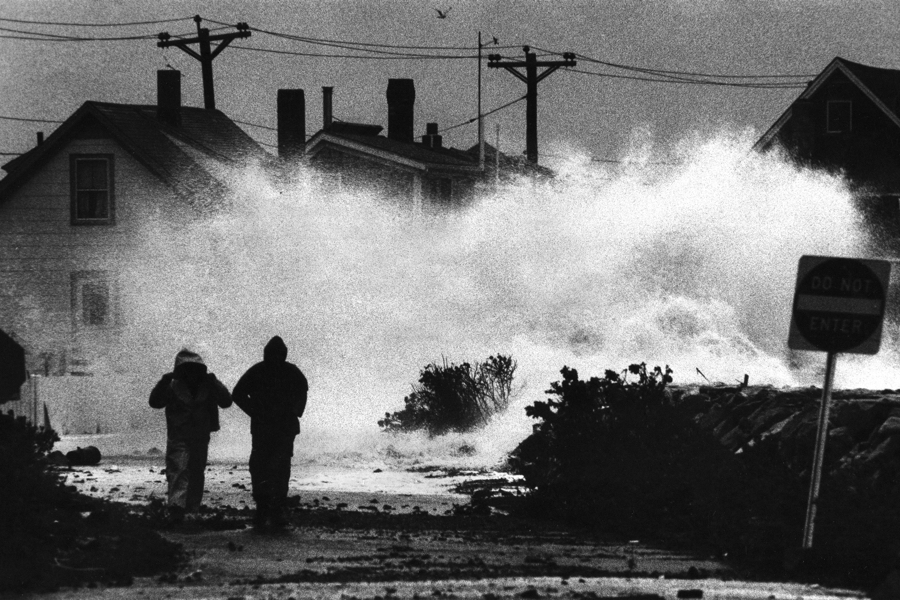 Residents leave a bettered section of Nantasket Avenue in Hull, MA during the 1991 “Perfect Storm” on Oct. 30, 1991. (Photo by Tom Herde/The Boston Globe via Getty Images)

Batten down the hatches, and the gaudy 12-foot-tall yard skeletons: a spooktacular nor’easter is rolling across the Northeast. It’ll land in Boston just before Halloween and the 30th anniversary of perhaps the most famous late-October meteorological events in New England history.

That’s right, as Boston prepares for heavy wind and rain this week, it’s time once again to remember the so-called Perfect Storm, which battered the East Coast in late October and early November of 1991, inflicting severe damage on coastal Massachusetts and killing the crew of a fishing vessel called the Andrea Gail.

History aside, there is little comparison between the storm on tap for this week and the one that was impactful enough to inspire the 2000 film—yet another New England contribution to the cinematic tradition of terrifying people about the might of the sea.

“It doesn’t really compare at all,” says Bill Simpson, meteorologist with the National Weather Service in Norton. “Back then we had gusts near 90 miles per hour. … This I wouldn’t say is a typical nor’easter, but it’s not nearly as big. We’re expecting some coastal erosion, but it won’t be the catastrophic coastal flooding we had back then.”

According to the latest forecast, Boston can expect to see some wet and windy conditions beginning to kick in by the evening commute, with winds gusting up to 40 miles per hour. We’ll then endure the most powerful parts of the storm later Tuesday night into Wednesday, with wind gusts as high as 50 miles per hour.

[Tue 5AM] Here’s the latest hourly wind gust forecast for the Nor’easter that will impact our region today through Wed. Strongest winds are expected tonight, diminishing Wed morning. Get your latest forecast on https://t.co/DkpsCtltAP #MAwx #RIwx #CTwx pic.twitter.com/ISGTEaCMwU

Rainfall will intensify later this afternoon and especially tonight as bands of heavy rain pivot in from the ocean. Here is a forecast from one of our high resolution models. pic.twitter.com/wUDLPHBBcP

By midday on Tuesday, the storm was slamming into New York and the tri-state area, with as many as 5 inches of rainfall expected in some areas before the storm migrates up through Southern New England. Then it’s our turn.

It’s going to be a nasty storm, but what made the 1991 Perfect Storm “perfect,” you’ll recall, were the overlapping meteorological phenomena of both a nor’easter and a hurricane that combined to make the weather particularly intense. In the end, it led to some $200 million in damage and killed 13.

This week, by comparison, we can expect no such thing. In fact, the underlying conditions seem pretty safe. “We’re lucky for this event that the tides are relatively low,” Simpson says. Power outages are a concern, due in large part to the fact that trees are still covered with leaves, but are not guaranteed.

So as the rains come down this week, keep those who lived through the Big One three decades ago in your thoughts. But as for whether the famed storm is making a comeback, like a Hollywood reboot of an early 1990s blockbuster, rest assured that it is not.