Here are the 2022 Boston Marathon Winners

The race is back on Patriots' Day this year. Who will come out on top for the big return? 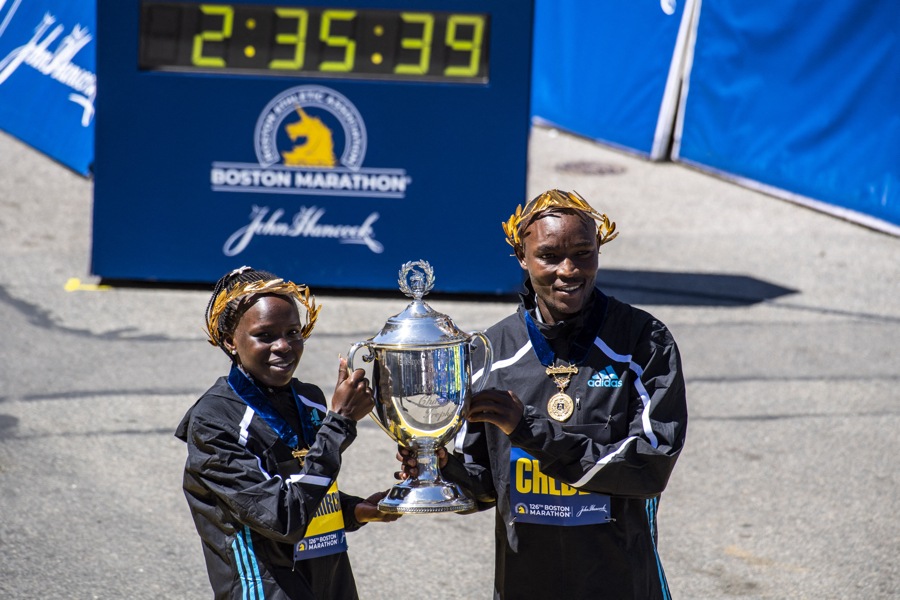 Peres Jepchirchir and Evans Chebet hold the victory trophy over the finish line after both took first place in their divisions in the 126th Boston Marathon in Boston, Massachusetts on April 18, 2022. – The 26.2 mile course (42.2K) is celebrating 50 years of having an official womens division, and being back to its normal April race date after cancelations and date changes due to the pandemic. (Photo by Joseph Prezioso / AFP) (Photo by JOSEPH PREZIOSO/AFP via Getty Images)

It’s Patriots’ Day in Boston, and the 2022 Boston Marathon is underway. Competition is particularly fierce this year, as the race makes its big return to its traditional date. So who will be first down Boylston Street? Consult our guide to the elite runners for a rundown of the year’s top contenders, and what you need to know about them. The men’s and women’s wheelchair divisions are set to get started at 9:02 a.m. and 9:05 a.m., followed by handcycles at 9:30 a.m. Next up are the professional men’s and women’s divisions at 9:37 a.m. and 9:45 a.m., before the para athletics division kicks off at 9:50 a.m.  Follow along for the results as they come in. 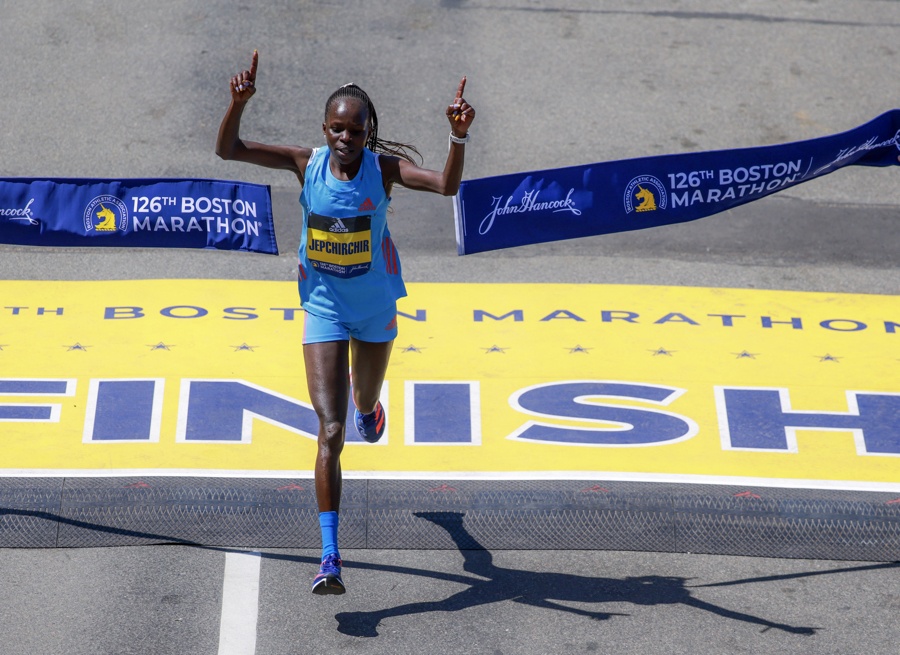 Boston, MA – April 18: Peres Jepchirchir winner of the Boston Marathon womens elite race with an official time of 2:21:01 as she crosses the finish line of the 126th Boston Marathon in Boston on April 18, 2022. (Photo by Matthew J. Lee/The Boston Globe via Getty Images)

What a race! After an exhilarating battle on the final stretch of the 126th Boston Marathon, Kenyan Peres Jepchirchir has come out on top with a time of 2:21:02, beating Ethiopian Ababel Yeshaneh by a hair. Jepchirchir was always set to be a top competitor, coming to the race after winning gold at the 2020 Olympics, and just months after her victory at the New York City Marathon. It came on the 50th anniversary of the first year women ran as official entrants in the Boston Marathon back in 1972. 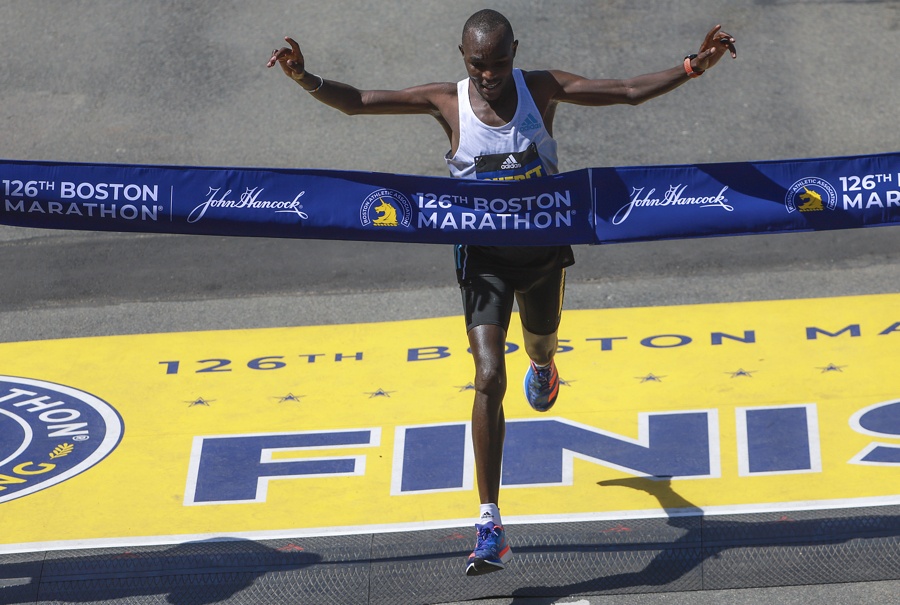 What a day for Kenyan Evans Chebet, who has won the 2022 Boston Marathon in the men’s division, with a time of 2:06:51, ahead of fellow Kenyans Lawrence Cherono in second and Benson Kipruto in third. It’s a first-ever victory at the Marathon for the 33-year-old, and also the first one he’s finished. Chebet ran the race in 2018, but didn’t finish. It comes after a fourth-place finish in London in 2021. His time is also one for the books: It’s the third-fastest finish in Marathon history. 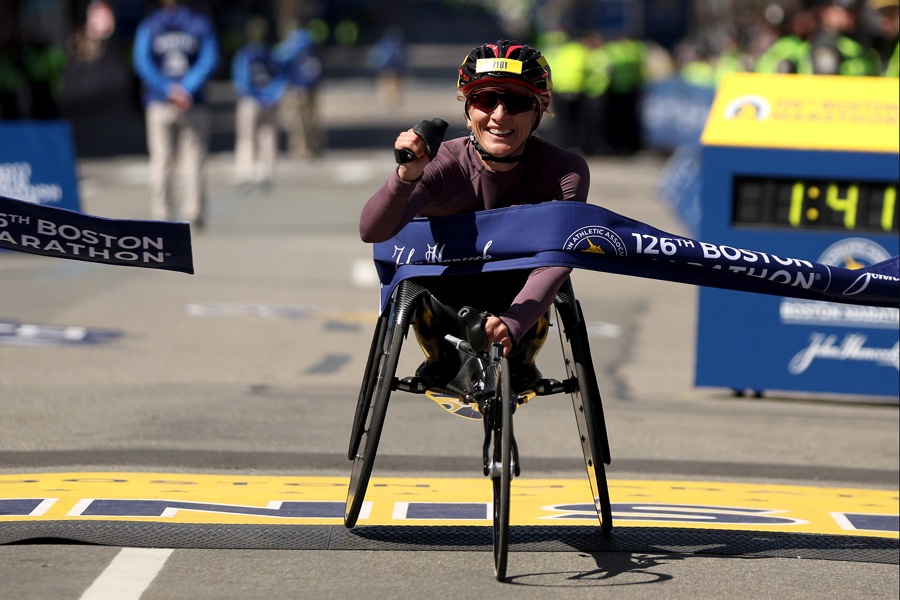 No surprises here. Manuela Schär, of Switzerland, is a champion once again in the women’s wheelchair division with a time of 1:41:08. This is her fourth Marathon victory, coming after her first-place finishes at the Marathon in 2019 and 2021. In 2020, she won the gold at the Paralympic Games in Tokyo. 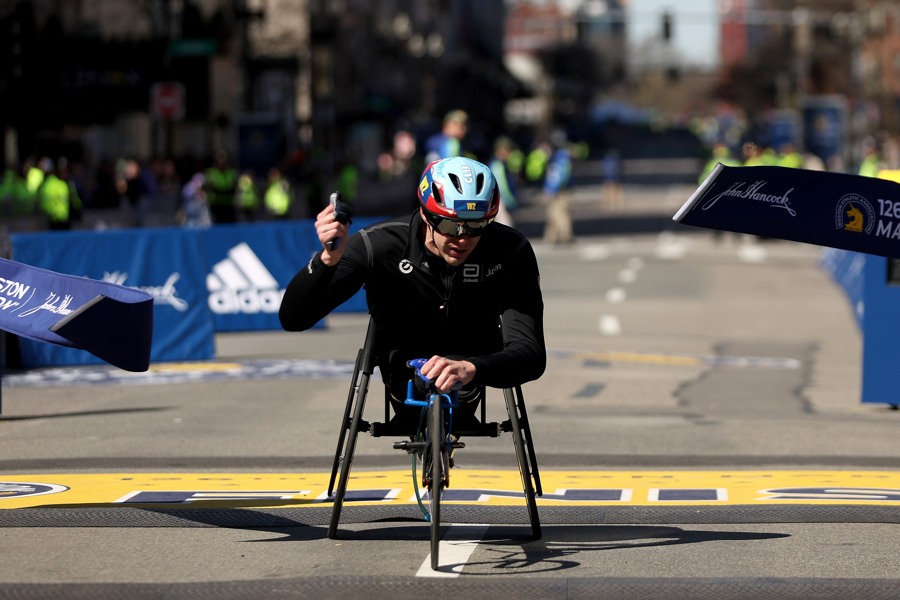 Daniel Romanchuk became the first competitor to cross the finish line at the 2022 Boston Marathon, crossing with a commanding lead and a time of 1:26:58 to start the day. This is a second Marathon win for the 23-year-old Maryland native, who crossed first in Boston in 2019. He finished second, behind Marcel Hug, at last year’s race in October.

Daniel Romanchuk comes through Cleveland Circle, MINUTES ahead of everyone else in the race! #WBZ #BostonMarathon pic.twitter.com/n9PcxJYu4h 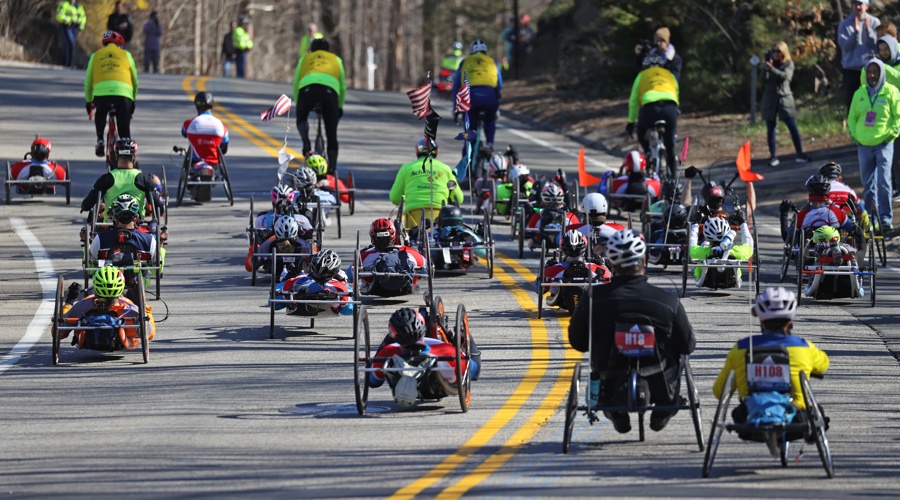 Hopkinton, MA – April 18: Handcycle start during the running of the 126th Boston Marathon at the starting line in Hopkinton, MA on April 18, 2022. (Photo by David L. Ryan/The Boston Globe via Getty Images)

Alfredo De Los Santos, a U.S. Army veteran born in the Dominican Republic, has again won in the men’s handcycling division with a time of 1:08:40; he also won in 2016. Houston’s Wendy Larsen won among women’s handcyclists with a time of 1:35:10, a victory that comes on the heels of her first-place Boston Marathon finish in 2021. Duos competitor Chris Nasser, who in Boston last year smashed the Guinness World Record for Fastest Man Pushing a Wheelchair in a Marathon, finished first again, with a time of 2:52:43.